Awhile ago, I briefly had some thoughts on how the World Baseball Classic could change and expand in the future. I figured I would expand a bit on that for this, the BASEBALL CONTINUUM 1ST ANNIVERSARY SPECTACULAR (or, rather, the overflow from it). This is something of a lengthy post, so go below the jump for it.

As I said in my previous post, there are a few things about the World Baseball Classic’s schedule that are likely to change. For example, it has already been said that there could be more teams in the qualifying round, and that qualifying could start in two years time (2015). It’s also likely that the rules from the previous qualifications in 2012 will also apply, with the last-place team from each pool in the WBC having to qualify while those that did not finish last in a pool will be automatically qualified (in other words, of the 2013 WBC teams, only Mexico, Australia, Brazil and Spain are going to have to go through qualifiers).

However, aside from that, there are plenty of things we do not know. For example, if qualifiers will start in two years, how does that affect the previous schedule that had qualifying the year before the Classic? And what about the new teams?

Well, I predict/propose that qualifying becomes a two-step process, with three “groups” or “tiers” of teams- teams that qualify for the WBC by way of their performance in the previous WBC would make up the A-tier, the qualifiers as they were in 2012 would be the B-tier, and the third tier would be the C-Tier. The C-Tier would begin play in 2015, and the winners of those pools would reach the B-tier, where they would have a chance to make it to the A-Tier.

It could look something like this (pardon my bad art skills): 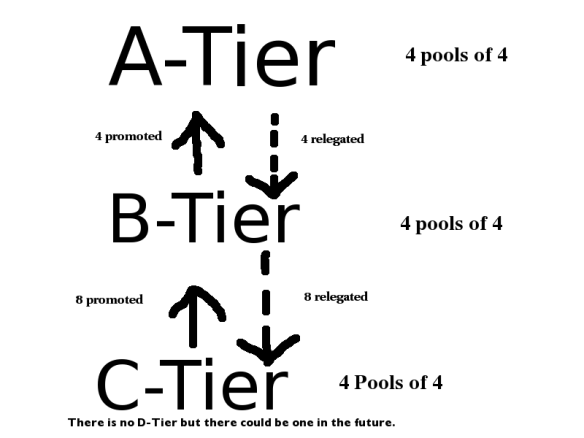 As you can see, the tiers all feed into each other: the two top teams from each pool of the C-tier go to the B-tier, while 2 teams per pool that did poorly in the B-tier fall to the C-tier. A similar relation exists between the A-tier and B-tier, although only one team from each pool is promoted or relegated between the two, as opposed to two teams from each pool between B and C. The reasoning for having 2 teams per pool being promoted or relegated between B and C is so that the number of teams in the WBC is at 36- after we get past that point some of the teams that would be playing would be extremely suspect, such as Afghanistan (apologies to the nascent Afghan baseball program) and Guam (which actually does have a baseball program that has produced a cup-of-coffee MLB player- John Hattig– but which is such a small population that it’s unlikely to be competitive). With luck, perhaps further success by the WBC could one day lead to a “D-tier” that could include these young and/or small baseball programs.

So what teams would be playing? And in what locations would these C-tier games be played in? Well, here’s my idea:

As I constructed these fantasy pools, I took into account geography, history and how the teams have done in international play and the IBAF World Rankings. However, sometimes there were just some leftovers and I had to kind of throw them together without some type of theme. This is such a pool. South Africa (29th in the IBAF World Rankings) came in third in the Jupiter pool of the 2012 WBC qualifiers, and is by far the best national team in Africa, with many minor leaguers or former minor leaguers usually on the roster- something that probably will be true in 2015 as well. France (tied for 32nd in the IBAF World Rankings) is one of the better countries in Europe when it comes to baseball, but it is leaps and bounds behind teams like the Netherlands, Italy, Spain and Germany. They finished last in the 2012 Jupiter pool.

The two newcomers are Indonesia and Ecuador. Indonesia, currently tied for 32nd in the IBAF World Rankings (with France), has played in some previous Asian Championship competitions and has medaled in three baseball competitions in the Southeast Asian Games.

Ecuador, meanwhile, is ranked 36th in world by the IBAF. It’s main claim to baseball fame is that Jaime Jarrin, the Spanish-language announcer for the Dodgers, was born there and has helped introduce baseball to the country’s youth. The city of Guayaquil is the site of Estadio Yeyo Uraga, which has 6,000 seats in it. In theory, with some renovation to get it up to global standards it could even host the pool.

The Filipinos are ranked 22nd in the IBAF World Rankings, but finished 3rd in the Taipei pool, so in this case they’d have to qualify up to the B-tier. However, the Philippines would likely host this pool at Rizal Baseball Stadium, one of the oldest large baseball stadiums outside of the United States, although it likely would need some retrofitting.

Thailand, ranked 25th by the IBAF, finished last in the Taipei pool in 2012, and was in general out of it’s depth despite having the help of Thai-American Johnny Damon.

Pakistan (23rd in IBAF rankings) and Sri Lanka (30th) round out the pool, and have only have success in extremely regional competitions against similarly obscure baseball programs.

This would probably be the best of the four C-tier pools, mainly because, unlike some of the other pools, this one would actually have some MLB players on Nicaragua and Colombia.

Nicaragua (which would host the games in Estadio Dennis Martinez) finished last in the Pool 3 qualifiers for the last WBC and would be ranked 2nd in this pool. Among the players who could conceivably be playing for the Nicaraguans in 2015 who currently have MLB experience are Everth Cabrera (who would be 28), Wilton Lopez (would be 32), Erasmo Ramirez (who’d be about 25), perhaps Vicente Padilla (who would be about 37) and some minor leaguers who could be in the bigs by then.

Colombia came in third in the last qualifiers but would be the top seed in this one. The Solano Brothers and pitchers like Julio Teheran and Jose Quintana would be possible players for the Colombians in 2015 who probably have already heard about now.

Argentina (24th) and Honduras (40th) both have had smatterings of minor leaguers at various times, but would be heavy underdogs in this pool.

Taking place in Prague (which has some international-standard ball fields), this pool would have few-if-any North American professionals beyond some passport players and perhaps some low-level minor leaguers.

Anyway, the top two teams from each of the C-tier pools would advance up to the B-tier pools, while the bottom two would wait until 2019 for another chance to advance out. In 2016, the B-pools would take place. They’d be similar to the qualifiers last time, with only one team advancing from it. However, unlike last time, it’d be a “true” double-elimination, not the modified double-elimination that happened in 2012 that made teams that hadn’t lost a single game be eliminated if they lost in the qualifier finals.

Anyway, the B-tier pools would look something like this:

Mexico and Spain took part in the 2013 WBC- the fact they both are in the same pool here (and thus ensuring that at least one of them would be unable to make it to 2017) is to ensure some more turnover. The pool would be played in Estadio Monterrey and would likely be won by Team Mexico, barring a major upset.

Played at Blacktown Baseball Stadium, it would feature the two Oceanian baseball programs as well as the winner and runner-up of the C-tier Pool 2. It would probably be won by Australia, but New Zealand is rapidly improving and would possibly be able to surprise.

Taking place in Panama City’s baseball stadium (where a qualifier was held in 2012), this would probably be the highest caliber of the B-pools, with every team (assuming Colombia and Nicaragua advance out of the C-tier) likely having at least one major leaguer. It’s anyone’s guess who would get out.

Held in Armin-Wolf Arena, where the 2012 qualifiers in Germany took place, the winner of this pool would be a first-time participant in the main WBC tournament. Germany and Israel (due to the use of Jewish Americans) would be the favorites.

So, what happens after that? Well, the winners of each B-pool (4 in all) would move up to the 2017 WBC. The runner-ups would remain in the B-pool, while the lower two from each would be relegated  back to C.

But what would the 2017 WBC look like? Well, it would probably depend a lot on what teams advanced out of B-pool. For example, it was originally thought that the winner of the Panama City pool would play in San Juan with the other 3 non-Cuban Caribbean teams (Dominican Republic, Puerto Rico and Venezuela), but when Brazil unexpectedly won, it was decided to have them play in Japan, where the heavy amount of Japanese-Brazilians would be better able to participate. For reasons such as that, to predict the pools for the 2017 WBC main round right now would be a fool’s errand.

That said, you CAN predict and suggest where those could be held. Korea, for example, has not yet had a WBC pool, despite the fact that it is perhaps the country (after Japan) that most buys into the WBC. The main reason for this, I believe, is due to the sometimes erratic weather of the peninsula. Rainouts are a common occurrence for the KBO, and the small area of South Korea means that it is not rare whatsoever for entire days worth of games to be lost to the weather. Thankfully, a domed stadium is under construction in Seoul, and would make an excellent place for a pool.

Other places that should definitely be considered for pools either in early rounds or later rounds include Santo Domingo, another return to San Juan and/or Tokyo, Houston (one of the most diverse populations in America), a return to Anaheim (probably for the finals) and perhaps the “Taipei Dome” being built in Taiwan.

But, hey, it’s a long way to go… who knows what might happen?