Note: The following may have minor spoilers about Fallout 4.

Like many gamers, I am eagerly awaiting the release of Fallout 4, the latest in the line of quasi-50s retro-futuristic post-apocalyptic action-adventure RPGs. Heck, I’ve even splurged for the collector’s edition! But it’s not just the opportunity to fight post-nuclear abominations that have me hyped… it’s also due to the fact that this installment of Fallout will be in Boston and will feature a society (“Diamond City”) that lives in a post-apocalyptic Fenway Park.

However, it appears that Bethesda Game Studios, the creators of this installment of the series, have gone even further, and baseball will actually be a part of the game. Take a look at this leaked achievement (you can get achievements for doing special things in-game):

Yes, apparently, you can hit a homer in Fallout 4 (there’s also an achievement for scoring a touchdown, but this is a baseball blog).

And, what’s more, Bethesda has gotten into the World Series spirit by tweeting this out:

Team with most votes gets this perk. RT for @Mets, Fav for @Royals. #WorldSeries pic.twitter.com/wlvCFs6Hs2

It appears that there will be a special “perk”, called “Big Leagues”, which will make it easier for you to use baseball bats and other “melee” weapons in combat, perhaps leading to what the game describes as a chance to “grand slam their head clean off!”. Needless to say, this game is rated M for Mature. 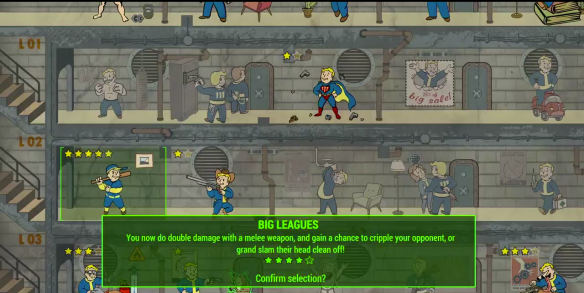 I want that vault-boy baseball uniform to wear for Halloween next year. Assuming, of course, I don’t just go with the BASEBALL ARMOR THAT IS IN THE GAME: 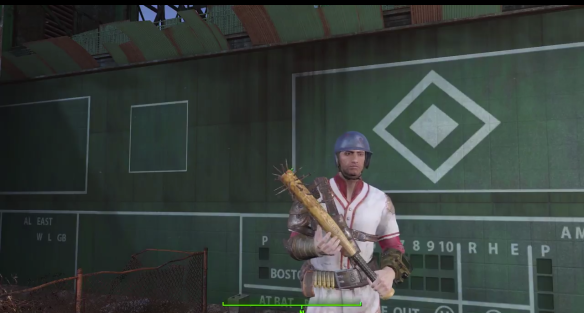 And, say, look behind the vault-dweller here. It looks like while the Green Monster itself has some holes in it, the hand-operated scoreboard still exists in the Fallout Universe, and there was a AL East, which is somewhat surprising since in the Fallout Universe most cultural progress (music, television, fashion, car design, etc.) ended around 1960, so I would have thought that they never would have implemented divisions in baseball there and oh-my-god-I’m-considering-the-pre-apocalyptic-baseball-set-up-of-a-fictional-post-apocalyptic-video-game-universe-this-is-the-geekiest-thing-I’ve-ever-done.

Oh, and the guards of Diamond City look like catchers or umpires, albeit ones wearing helmets that look like they just walked off the set of a Mad Max movie: 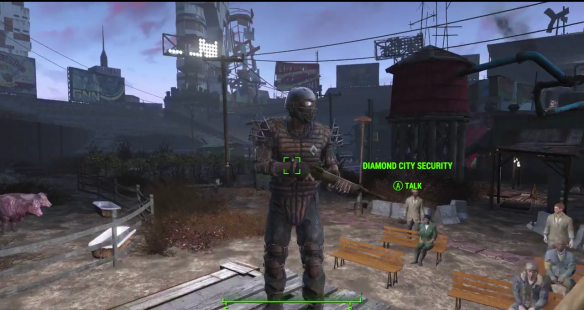 I wonder what other sort of baseball references they will have in Fallout 4? Will some Red Sox greats have voice roles (don’t laugh, Wayne Newton did voicework in the game that was set in Las Vegas)? Will there be a big friendly green monster named Wally who lives in Diamond City? Apparently the plot involves your character being put in a cryogenic freeze, so maybe they will make a Ted Williams joke?