Due to a mix of the WBC, Out of the Park Baseball (review next Friday!) and Zelda, I’ve been slacking a bit on the Bizarre Baseball Culture front, so…

In honor of the Power Rangers reboot we didn’t ask for (which I also haven’t seen yet), the Baseball Continuum is going through the baseball episodes of the Power Rangers franchise. Previously, we looked at episodes from the original Mighty Morphin series and the Zeo series. This time, we are looking at an episode from the series that followed Zeo: Power Rangers Turbo. Adapted from the Sentai series Gekisou Sentai Carranger, the series first aired in 1997, well after I had stopped watching Power Rangers. In fact, this will be the first Power Rangers series entry for Bizarre Baseball Culture where my knowledge is almost entirely from what I find on the internet.

The theme song, however, remains catchy:

So, head below the jump for more on the Turbo episode “The Curve Ball”.

END_OF_DOCUMENT_TOKEN_TO_BE_REPLACED

Now, by this time the Power Rangers franchise’s fad stage was coming to a swift end, and I personally stopped watching for one reason or another sometime during this series. And while I can’t remember much about it, I can remember that the theme song, like the original Mighty Morphin theme song, was catchy.

So, anyway, head below the jump for a look at the Power Rangers Zeo episode entitled “Rangers in the Outfield.” 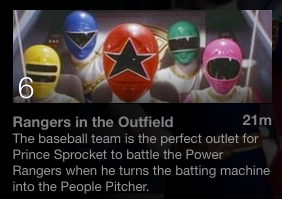 END_OF_DOCUMENT_TOKEN_TO_BE_REPLACED

Nostalgia is a word made up of a Greek word for “homecoming” and a Greek word for “pain”. Normally, nostalgia is used as a word to mean an aching for going back home, or the general past. Given the roots of the word, though, you could make a case that it also means the pain that comes from a homecoming, like when you watch what was your favorite show when you were five in advance of a big-budget movie reboot  and see just how stupid and inane it was.

Yes, it is time to head onto Netflix as we start a look at the baseball episodes of the Power Rangers franchise, beginning with the 32nd episode of Mighty Morphin Power Rangers, “A Star is Born”. 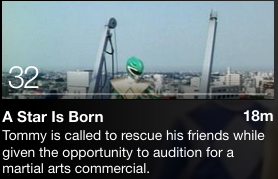 May the power protect us… after the jump.