Last time, I introduced you to “Strange Sports Stories”, the on-and-off anthology of DC Comics’ Science-Fiction and/or Fantasy tales involving sports. That past installment was from the 1960s Brave and The Bold run of SSS, but this time, we’re looking at the Strange Sports Stories stand-alone series, from 1973. It only lasted six issues, but it’s first issue prominently featured baseball (amazingly, it wasn’t in any of the other five issues, and as far as I can tell no sport was featured more than once) in a tale called “To Beat The Devil!” 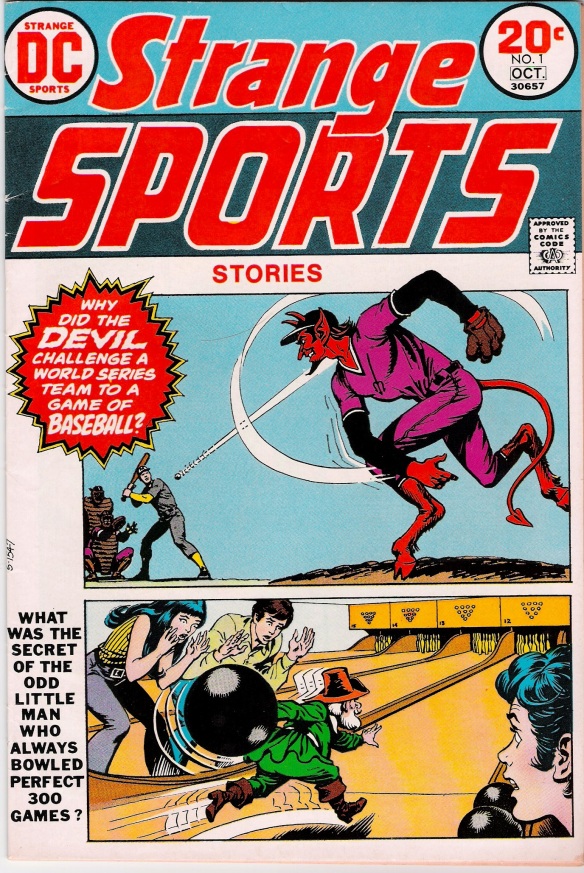 Written by Frank Robbins (who was primarily an artist, most notable for having helped create the character of the Man-Bat for DC Comics), penciled by Curt Swan (who is best known for his work on Superman comics) and inked by Dick Giordano (best known for his partnership with artist Neal Adams on Batman and the socially-conscious Green Lantern/Green Arrow book), this tale, as the cover (done by Nick Cardy, who according to Wikipedia is best known for his work with Aquaman and the Teen Titans) indicates, is about a face-off between a baseball team and the devil himself. The Devil, of course, is no stranger to baseball, primarily known for his involvement in baseball-themed musicals, but this is the first appearance by Satan in Bizarre Baseball Culture. Well, unless you count this weird guy from the second AAA Baseball/Marvel comic. I don’t.

Anyway, go below the jump for more:

END_OF_DOCUMENT_TOKEN_TO_BE_REPLACED

This is gonna be fun. Today, I take my first look at a quintessential part of Bizarre Baseball Culture: “Strange Sports Stories”. A short-lived DC Comics anthology banner that popped up a few times during the 1960s and 1970s- at one point even having it’s own book for six issues- it’s title told you everything you have to know about them: they were sports stories that were strange. Sometimes they would be sports mixed with magic. Other times it would be sports mixed with science fiction. No matter what, though, they were most definitely bizarre. And, so, by definition, all baseball installments of “Strange Sports Stories” are going to be Bizarre Baseball Culture.

And we’ll begin with the very first “Strange Sports Stories” story, from waaaay back in December 1962 or January 1963 (it’s cover date was January, but comics often come out before the cover date, so it likely was already out in December- if not even earlier, as the GCD says it was on stands in late October), in The Brave and The Bold #45, the first “Strange Sports Stories” installment ever: “CHALLENGE OF THE HEADLESS BASEBALL TEAM!” 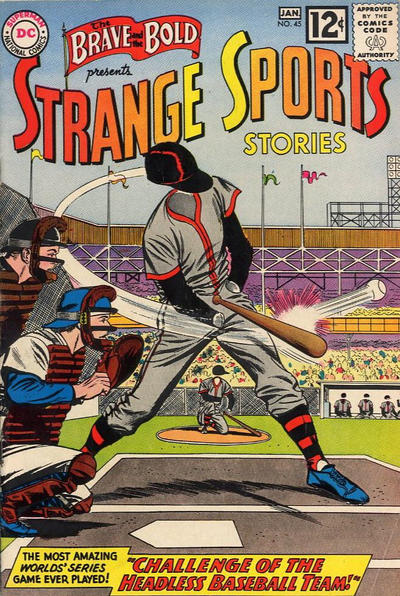 Note that this isn’t an actual picture of my cover- my cover is in sort of crummy shape- the book is over 50 years old, after all.

Let’s go below the jump for more.