If there is one lesson to be learned from the 2014 Rochester Red Wings, it is that minor league baseball is perhaps even more cruel than Major League Baseball, and perhaps even more unforgiving, at least to teams.

If you want to know what I mean, take a look at the standings of the International League this year. You’ll see on them a horrible unbalanced league, where one division clearly was better than the other two. That division was the IL North. Take a look at the near-final (there were one or two games still going on when I posted this) standings here: 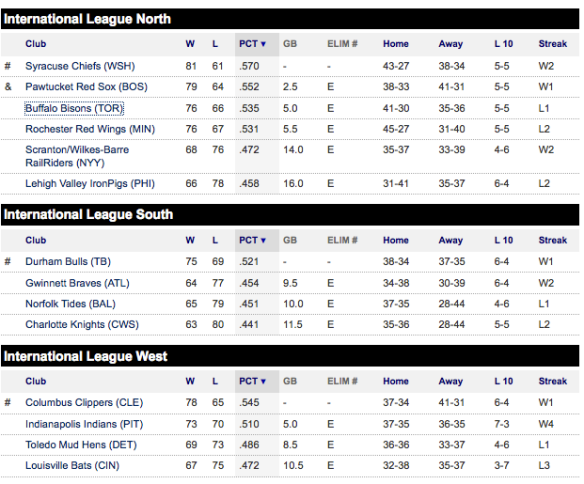 Now, as you can see, the North simply owned the other divisions. The four teams with the best records in the league were in it (meaning the playoffs will consist of the first, second, fifth, and sixth best teams), and it’s two worst teams (Scranton and Lehigh Valley) would have been in a three-way fight with Gwinnett for second in another division (the South).

Sadly for the Red Wings, they were in the North. And, sadly, they were unable to win the Wild Card. To be sure, there were times this season where it could be said they blew their chance at the postseason: a horrible 0-for-Ohio road trip, a few blown games by the bullpen here and there, and some games where they got plenty of men on base but never got enough of them home. But, ultimately, the Red Wings were just unlucky victims of geography, stuck in what may have been the best division in all of baseball (relative to the rest of it’s league).

That said, despite the disappointing ending, it was a ton of fun, so on Wednesday, I’ll have a second part, a retrospective on the 2014 Red Wings season, complete with photos!