As I write this, America is in the grasp of the Every Simpsons Ever Marathon on FXX. To be more exact, we’re currently on Day 10 of 12. Maybe Day 11 of 12. Depends on when this goes up (probably Day 11). But, don’t let FXX lie to you: They don’t have every Simpsons ever. No, they are lacking the original Tracey Ullman Show shorts, the Butterfingers commercials, at least one other short, at least two music videos, and, of course, countless comics.

The Simpsons has long been a staple of Bongo Comics, the publishing group co-founded by Matt Groening to produce comics based on his TV shows, and this time on Bizarre Baseball Culture, I look at Bongo Comics’ Simpsons Comics #120, which tells the tale of Homer, Bart, and a record-setting baseball.

Simpsons Comics #120 came out in July 2006, script by James Bates and art by John Delaney. I’m working from a digital copy from Comixology (only 1.99!).

(Also, all characters, images and panels from the comic are trademarked and copyrighted to their owners and rights holders, all pictures here are are being used under fair use doctrine and are meant merely to support and enhance the opinions and facts stated in this post.)

Our tale begins with Homer being forced by Marge to spend some time with Bart, so off to the Springfield Isotopes game they go, where star player Danny Dings is going for a home run record.

Of course, surely these two storylines will intersect in some way… right? Oh, yes, yes they will. Because before you know it, Dings dings a record-setting dinger:

And, of course, it lands in Homer’s nachos, a tragedy that causes the Kwyjibo to weep.

And to also question a higher power for his misfortune:

Yes, the terrible tale of a man who has lost his nachos. Truly, a sad tale. Bart grabs the ball because Homer doesn’t want it, but when Professor Frink points out how much the ball must be worth, Homer quickly changes his mind and goes after Bart for the sphere… and liking the attention it gets him:

And, of course, as you could probably guess, Homer quickly lets this go to his head, declaring himself “Homer” Homer (yes, “Homer” Homer, making Homer not just his name, but also his nickname). He also starts walking around with the ball around his neck and looking like a pimp or something:

We see some of Homer’s use of his celebrity, as he demands that the ball also be given pasta at a fancy Italian place, having Moe charge people just to sit next to Homer and the ball at the local watering hole, getting to the front of the line at the DMV (much to the annoyance of his in-laws Patty and Selma)… and tying up Bart so he can’t go on TV and claim the ball is his: 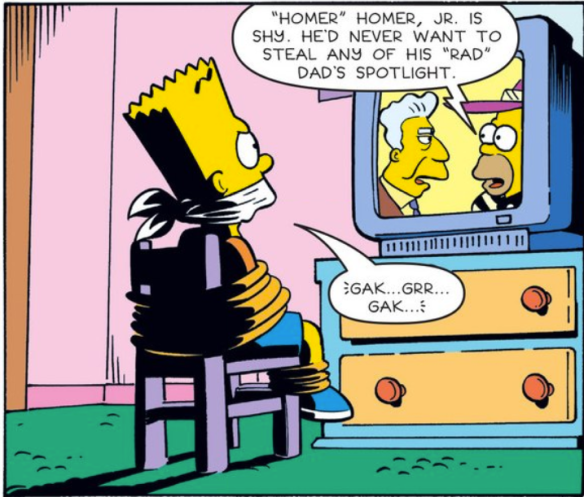 When Marge finds out about this, she intervenes, yells at Homer that this is the worst thing he’s ever done (and considering Homer has beaten up a former president, routinely has strangled Bart, once used a gun to open a can of beer and has nearly destroyed all of Springfield on several occasions, that’s saying something), and then gives Bart the ball….

…Which he then puts into the Ark of the Covenant and brings to school for show and tell:

And, much like his father, he abuses his power, using it to get better grades, get out of detention, get a ride alone on the bus back home and generally lord over the school. Also, there’s a Richie Rich cameo.

Speaking of that solo bus ride, when Bart gets home from it, he finds the Rich Texan, Comic Book Guy and Montgomery Burns all there to try and buy the ball. Well, actually, Comic Book Guy is just there as an intermediary for an unnamed comic book creator:

Bart and Homer soon are fighting about who should get the money from the sale of the ball, so Marge finally has had enough and takes the ball. It is then that she sees a plea from Danny Dings himself: 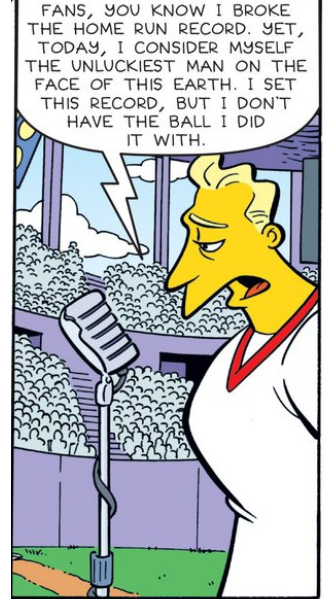 Marge then realizes they shouldn’t sell it or keep it, they need to give it back to Danny Dings!

What do Homer and Bart think of the idea?

During a promotion on Kent Brockman’s TV show to promote the auction, though, Homer and Bart find out that not many people are happy with their opportunistic capitalism: 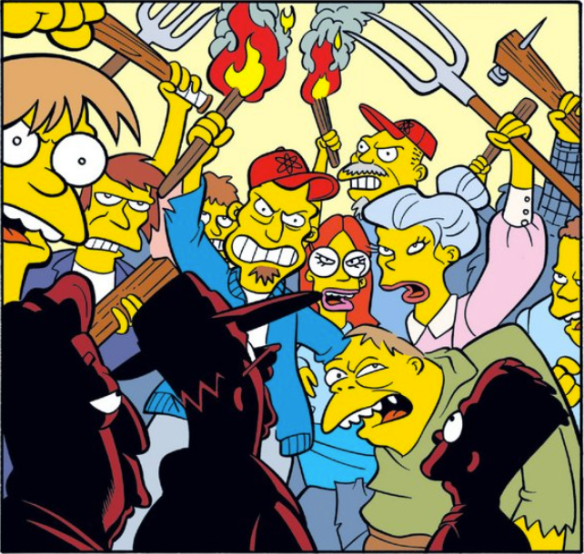 In some ways, I’m sort of surprised we have yet to see a situation where a player asked for the ball back and they didn’t give it to him. I’m sure it must have happened, but I can’t remember one off the top of my head.

Still, undeterred by the pitchfork-and-torches mob, Homer and Bart spend some quality time with the ball before the auction: 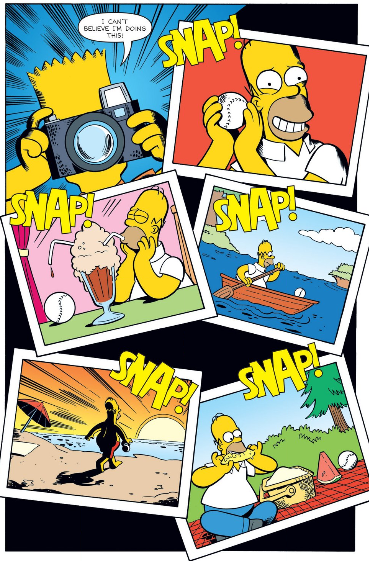 Until a seagull steals it. I’m not entirely sure if a seagull would be able to steal a baseball, but, uhm, it happens here:

They soon are chasing the seagull, which, of course, goes to the Isotopes stadium, where it plants the ball in it’s nest. So, grabbing a hose, the two go to get it:

Of course, this being Homer, he soon is perilous hanging over the stadium: 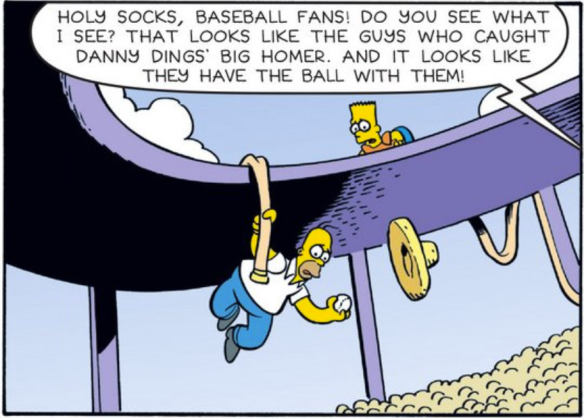 And so, like the final scene in Indiana Jones and the Last Crusade, Homer has a choice: he can keep the ball and die, or lose it only to live. You can probably guess what happens next: Homer drops the ball, Danny Dings thanks him for giving him his ball back… and the two Simpsons agree to never spend time together again.

It should be noted here that in some ways this comic owes something to the actual situation that inspired the documentary Up for Grabs. If you haven’t seen that documentary (and you should), it’s about the tale of what happened to Barry Bonds’ 73rd home run. One guy caught it, only to be tackled to the ground by a mob of people trying to catch it. Another guy picked it up and was the first one the stadium security saw with it, and so they named him the person who caught the ball. Needless to say, the original fan who caught the ball sued. Eventually, the two sold the ball and divided the proceeds… except it had taken so long (and the steroid scandals had erupted) that neither of them got as much money as they could have, and in fact at least one of them actually lost money due to court costs.

Anyway, there you go… Simpsons Comics #120. Just another instance of Bizarre Baseball Culture!

Next Time: I’m…. not entirely sure yet.