One of the main types of Superhero is the patriotic hero, wrapped in the flag, fighting crime and evil not just to protect a city, but to protect a country. The quintessential patriotic hero, of course, is Captain America. But, contrary to popular belief, he was not the first. No, that honor goes to The Shield, “G-Man Extraordinary”, who first showed up in Pep Comic #1 in January 1940. By contrast, Captain America didn’t appear until March 1941. The Shield- created by MLJ Comics (which eventually became Archie Comics)- is actually Joe Higgins, who gained his rather generic superpowers (strength, invulnerability, etc) from  a chemical formula (much like, yes, Captain America eventually did).

Anyway, given his patriotic get-up, it was probably inevitable that the Shield would one day crossover with the National Pastime. And, in fact, it happened rather quickly in Pep Comics #7, which came out later in 1940. It can be found here, written by Harry Shorten and drawn by Irv Novick.

Anyway, onto the story:

We begin with the standard organized crime villains (these ones belonging to “Al Moroni”), not unlike the ones we’ve seen in plenty of previous installments of Bizarre Baseball Culture. It’s sort of weird that we don’t really ever seem to run into actual supervillains in these things, especially considering that the vast majority of these Bizarre Baseball Culture stories involve superheroes.

(JUMP for the rest of the story)

Anyway, the gangsters talk about how the great slugger “Madaggio” (flip the first two syllables around and you’ll see how they came up with that name) of the NY Americans has ignored their warnings three times, so it’s time to take care of him. So, later that day, as Joe Higgins (and his girlfriend) coincidentally watches the Americans play the Blue Sox. This also is something that has happened before in previous installments of Bizarre Baseball Culture: the hero always seems to be at the ballpark when a crime is committed there. It makes sense story-wise, of course, but it’s still kind of weird.

So, anyway, during the game, tragedy strikes when Madaggio gets blown up by an exploding baseball.  Higgins takes to the field to investigate, but it’s too late. 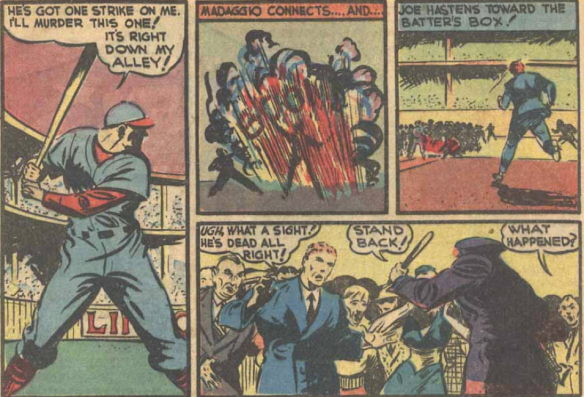 So, Madaggio is dead, Moroni must now want to keep a low profile, right?

Okay, fine, Moroni lives up to the first five letters of his surname and sets another guy on 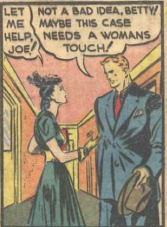 fire with an incendiary bullet. Subtle. Go and kill not one but TWO ballplayers, in no way will that bring attention. People, like, y’know the FBI and it’s best agent, Joe Higgins, who asks his girlfriend Betty to go talk to the wives of the murdered players, because maybe this case could use a woman’s touch. Seriously, that’s what he says, look to the right. Also note that the writer doesn’t have the apostrophe, thus leading our hero to say “womans”, which isn’t a word. Sorry, it’s the English minor in me. The fact this is a comic book story from 1940 is no excuse.

So Betty goes to the Madaggio home and talks to the ballplayer’s widow, who, given the time period, was probably named Dorothy Noldar, as opposed to the woman Madaggio would have married later in life, Marilyn Roemon. She tells Betty that her husband had received a letter demanding money or else some bad stuff was going to happen. With this information, Betty leaves… and is promptly met by a gangster, who the Shield shows up, beats up, and then tortures.

Wait, tortures? Yeah, totally, he drops the henchman on top of electrical wires, leading to this immortal panel.

So, after this shocking development (sorry), the mobster tells the Shield that the next target is New Yorkers’ player Cal Bubble, a star pitcher who is in no way, shape or form supposed to be Giants pitcher Carl Hubbell. And the manager of the New Yorkers, named Terrier, is in no way meant to be Giants manager Bill Terry. Nope, total coincidence.

The Shield’s brilliant plan to entrap the mobsters is, of course, to play in Bubble’s place.

And thus begins the great career of the “Masked Marvel”. Look upon him (to the right, press the image for a bigger picture of it) and despair, knowing that nobody what happens, you will never be able to top that image of a masked baseball player.

Predictably, we then get a montage of the “Masked Marvel”  doing Bugs Bunny-like feats. Feats like…

Knocking the catcher backwards with a fastball!

Hitting a HR off a flagpole… ON A BUNT!

And having that home run be mistaken for a comet!

So, having proved himself the best ballplayer of all time, the gangsters decide to target him. Which is weird, since they weren’t trying to get protection money from him in the first place… but whatever. The bullet harmlessly strikes the Shield, he ditches his uniform and then flies up to meet the sniper, who he quickly dispatches. I’m not going to put up an image of how he does it, but I will say it involves a rope, using said rope as a lasso, and twisting that rope around a very tall flagpole.

After that, it’s a standard and not particularly interesting superhero tale that probably would have worked just as well no matter the plot: The Shield goes to the hideout, beats up some people, gets stuck in a death trap, escapes the death trap, and then rushes and barely stops them before they could have murdered more.

Oh, and he hangs their car over Coogan’s Bluff:

And thus ends the tale of The Ballpark Murders, yet another pedestrian Superhero yarn from the Golden Age that is nothing special. It isn’t bad, but it’s just kind of… average. Still, it’s kind of fun to see the little nods to actual baseball players and locations, and there is no shame in that.

9. The Shield and the Ballpark Murders (You are here now)

39 thoughts on “Bizarre Baseball Culture: The Shield must solve “The Ballpark Murders””