“What are we going to do this week, Dan?”

“The same thing we do most weeks, readers… try to find Bizarre Baseball Culture!”

Yes, this week on Bizarre Baseball Culture, we are looking at the Pinky and the Brain episode entitled “Pinky at the Bat”. Pinky and the Brain, for those of you who weren’t kids during the nineties, are a pair of genetically engineered mice who spun-off from Animaniacs to have their own show and then later a crossover series with Elmyra from Tiny Toon Adventures. The cartoon was made by Warner Brothers and Amblin “Steven Spielberg Presents” Entertainment. The basic plot of every episode is that the Brain, a supergenius, comes up with a plan to take over the world, but the idiotic Pinky (who likes to say “NARF!”) usually foils it through his incompetence. This particular episode is from November 22, 1997.

We begin, as always, with the Brain explaining to Pinky his latest plan: a leather repellant! Once exposed to the formula, the Brain explains, people will be unable to touch their wallets, leading to economic collapse.

“But what if they have vinyl wallets?” asks Pinky.

“People with vinyl wallets have no money,” the Brain explains.

Anyway, the Brain says that in order to release his leather-repellant formula in such a way that it will spread around the globe, he needs to release the spray from a certain location at a certain time when atmospheric conditions are right. And that means that they need to be released on October 2nd from “this precise point,” says the Brain.

One guess what that “precise point” is…

If you guessed “thinly veiled Dodger Stadium”, you are correct!

Why, the pitcher’s mound of the New Hampshire Pineapples Stadium, of course! You know the NH Pineapples, right? No? Well, that’s because, the Brain explains, it’s an expansion team, and they are going to need to be the team’s star players!

So, off they go, and after Pinky mistakes Babe Ruth for Ruth Buzzi (these shows always had a few jokes that went over kids’ heads), the Brain fills Pinky in about how baseball is a game where highly-trained athletes play in front of adoring fans… at which point we cut to inside the stadium itself, where we see that the Pineapples seem to draw like they are the Marlins: 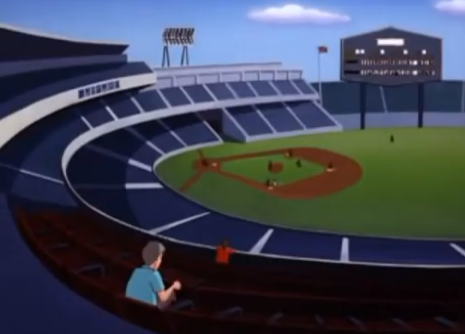 Oh, and those fans that are there basically are just there to tell the players how much they stink. Heck, even the food vendors are heckling them! So, needless to say, things aren’t going well for the New Hampshire Pineapples, and their owner is not happy, to the point where he’s firing people… even his mother! And the manager of the team isn’t just fired, he’s thrown in a dungeon! Who is this owner?

Well, who would you expect?

George , errr… Beanstainer, of course! Seriously, so much of this probably would have gone over kids’ heads, but it’s obvious that the people behind the show were baseball fans and were having a hoot making it. Also, while I didn’t get a screenshot of it, there are times where it is “filmed” as if it was a Seinfeld episode, with Steinbrenner’s back to the camera.

Anyway, with the manager position open (and Pinky pondering why the bat-boy doesn’t wear a cape), the two mice go see Mr. Beanstainer, who is in the process of firing his phone and then firing them as soon as they enter the door. The Brain, however, introduces himself as “Sparky LaBraina” and Pinky as “Pinky Rodriguez”, from the “Diminutive Republic” (to explain their small stature), and he convinces George to hire them, with The Brain as player-manager.

After an introductory press conference where “LaBraina” says that, “Today, I consider myself, a mouse trying to take over the world,” he rallies the Pineapples by reciting some of “baseball’s hackneyed cliches”. Of course, he messes them up and says them like he’s Mr. Spock:

“It hasn’t concluded, until there is closure!”

“It isn’t over until the woman with the eating disorder ululates!”

We then cut to “Van Spoony”, who narrates the game between the Pineapples and the San Jose Malamutes, and their star, “Herschel Porkheiser”. It doesn’t go well, with the Brain getting HBP, and then getting stuck to the ball. Thankfully for the Pineapples, though, he comes loose on the next play, and the Malamute 3B throws him home thinking he’s the ball… but of course, as he says, “I am not a ball!” 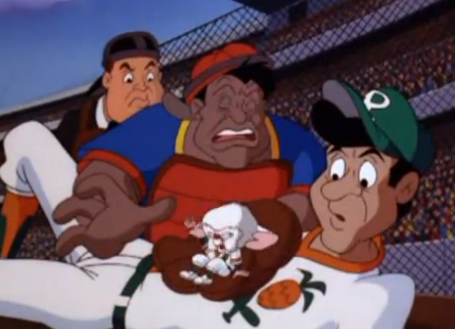 As a result, the Pineapples win. Commercial break!

After the commercial, we see the Brain sing a song that is sort of like “Take Me Out To The Ballgame”, only it’s really about how he’s going to rule the world. Oh, and he benches Pinky, telling him he’s taken the new position of “benchwarmer”. Pinky, of course, thinks this means he actually has to warm the benches, so he covers it with pillows. And then, of course, we get a montage of how the season goes, complete with this league standings page, which makes no sense mathematically and continues the tradition thus far in the episode of giving each team a nickname that is the opposite of what city it represents:

After the montage, the Brain is kicked out of a game after arguing a call, during which he says that the runner was clearly safe by 1.2 kilometers. He then does an Earl Weaver impression, but when you are that small, it doesn’t really do much, does it? Why, the umpire simply kicks the Brain into a “Got Cheese?” advertisement in the outfield.

October 2nd comes around, and the Brain reminds all of us he needs to be on the pitcher’s mound at 10 PM in order to release his leather-repellant formula. Remember, 10 PM. Or, as the Yankees and Red Sox call it, the 4th inning.

Cut to 9:52, the 9th inning of a pitchers duel that seems to be a double-no-hitter. We see how the Brain is doing it: he’s got a robotic arm that throws fastballs for him. Strangely, the umpire doesn’t seem to care about this clear breach of the rules. But, with time running out until he needs to get on the mound, the Brain tries to figure out a way to end the game quickly. Pinky, meanwhile, has collected plenty of splinters from the bench and created his own baseball bat: THUNDERPOIT.

It’s now 9:58, and Brain, after insulting Pinky’s craftsmanship, says there is only one way to end the game quickly. And, despite Pinky’s suggestion that they go out on strike (remember, this episode was only three years after the ’94 strike), Brain has a different plan: send in Pinky to strike out.

Just then, though, a player steps on a conveniently placed perfume-sprayer of the leather repellent, and it the spray gets on Thunderpoit, with nobody noticing. Brain tells Pinky to strike out so that the game ends (this is a plot hole I’ll address later), but as Pinky walks to the plate, baseball gloves laying around are repelled by the bat, which the Brain notices… too late! While trying to get Pinky’s attention, he starts shaking his arms up and down… which he early had told Pinky was the sign for “swing”. So Pinky swings, and the ball goes out of the ballpark, propelled by the anti-leather repellant that had been on Pinky’s bat.

Of course, this provides an opportunity for more tributes to The Natural: the ball hits the stadium lights, all of them explode, Pinky does a slow-motion jot around the bases and music somewhat similar to the score of the film is played.

With one minute left, the Brain starts making a move towards the pitchers mound to try and release the leather repellant. Except, one problem… as the winning manager, he’s caught up in the celebration: 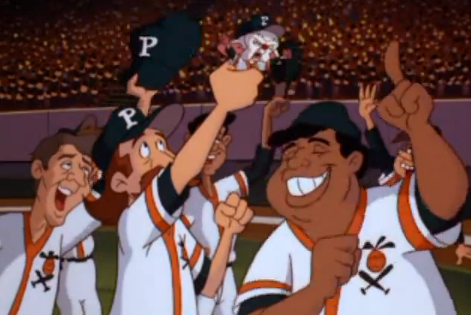 10:00 comes and goes, and, once again, the Brain’s latest scheme is foiled. Also, Beanstainer fires him and Pinky. Why? Because it’s what he does.

So, the Brain tells Pinky, it’s time for them to prepare for tomorrow night. What are they going to do?

They’re going to try and take over the world!

Now, this was a good cartoon, with lots of little nods to baseball history and movies and a funny plot. But there are four major inconsistencies that bug me:

Next time on Bizarre Baseball Culture: What’s the opposite of Warner Brothers?

37 thoughts on “Bizarre Baseball Culture: Pinky (and the Brain) At the Bat”