Superman. Contrary to popular belief, he was not the first superhero, but he was the first to truly make an impact. First appearing in Action Comics #1, this year is his 75th anniversary, and his latest film, Man of Steel, was a runaway success that already has spawned a sequel due out in 2015 where Superman will meet/fight/probably-become-buddies-after-that with Batman. By the way, Man of Steel establishes that Clark Kent is a Royals fan.

But, for our purposes, we are focusing on the past with Action Comics #50, waaaay back in July, 1942. It’s the first of two Superman stories for Bizarre Baseball Culture. There will be another, more modern, story in a few days. I read it in The Superman Chronicles Volume Nine, which I got from my local library. All scans and screenshots are for educational or demonstration purposes only and are being used under the fair use doctrine. Also, I’d like to note that Michael Clair has also covered this story, and his scans are of way better quality than mine. Maybe he has a better scanner than me. Or maybe he somehow has a more flexible thing to put in the scanner than a large Trade Paperback collection. But I digress…

Anyway, go below the jump:

The story is untitled, but is called “Play Ball!” in the index of the trade paperback book in which I found it. Other sources call this story by the name of “The Professional Baseball Player”. Who is right? Who is wrong? I don’t know. All I know is that it was written by Superman co-creator Jerry Siegel, penciled by Leo Nowak, and inked by Ed Dobrotka. This is somewhat unusual, as the Superman Chronicles says that most Superman stories of the day were illustrated by John Sikela. Back then, though, it was rare for comics to officially credit anyone other than the people who actually created the character (and even that sometimes was up for debate), so I can’t say with 100% certainty that the people that DC says were involved were actually involved, but it’s the best I have.

Our story begins, as these stories often do, with a splashy image of our hero doing something vaguely connected with the story. In this case, it’s Superman flying away from a ballpark, chasing after a baseball that only he could have hit, really: 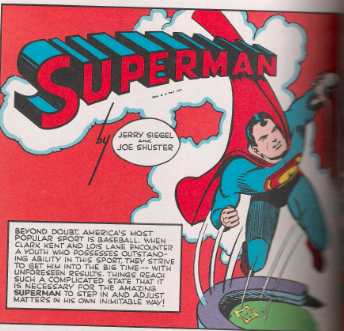 You can semi-see the ball on the right side. Sorry about the bad scan. They get better.

And then, again like most of these stories, we cut to the great Metropolitan newspaper that is The Daily Planet, and Editor-In-Chief Perry White giving Clark Kent a big new assignment: to cover spring training of Metropolis’ big league team. Why Clark Kent? I don’t know. I guess Steve Lombard hadn’t been invented yet, so Clark Kent got the sportswriting assignment. Either way, Kent has to go to “Lauderville, Florida” and cover spring training. An interesting thing to note here is that during WWII most MLB teams were unable to travel down to Florida for training camp, but I guess it’s possible that those restrictions hadn’t yet taken effect when this story was written.

But, wait! Lois wants to go, too! This despite the fact that Clark reminds us all that baseball is a man’s game, without any room for those ladyfolk and all their cooties. By the way, this is the first of a common theme throughout this issue: Golden-Age Superman is an asshole. This is just act number one of douchery by Golden-Age Superman in this comic.

Oh, sure, some of the things, like his “no-girls-allowed attitude”, are products of the time, but in other cases I’ll get to later, it’s just him being a dick. And while plenty have complained about Big Blue’s actions during the final battle in Man of Steel, at least all of that was being done by an inexperienced Superman who was trying to save the world, as opposed to what happens in this comic, where we have a Superman who’s been doing this for a few years going to some extreme measures to…well… read on.

So, we cut to Lois and Clark heading down to Florida by train. Along the way, the train stops at a small town called Castleridge, apparently for 15 minutes. So the two reporters go grab a bite to eat… at which point the train leaves without them. So much for 15 minutes! So, to kill time waiting for the next train, Clark decides to use his supervision for what it was meant for: spying on the locals.

Act number two of douchery by Superman in this comic: Voyeurism.

The most interesting thing his super-eyes can find is, of course, a baseball game. To be more specific, a game where there is a pitcher making the hitters look like fools, to the point where the opposing team doesn’t even want to play. Yeah, this pitcher is good, so our intrepid reporters do what any good reporter would do: write up about the phenom who has escaped MLB notice. Oh, wait, that is what a good reporter would do, but this is the Golden Age, damnit, and ethics be damned, our heroes will convince the pitcher to come with them to become a professional ballplayer for Metropolis. Even after he says no:

So, Stan Doborak (as we learn his name is) doesn’t want to play pro ball because there is farming to be done? Well, that’s not going to stop the Last Son of Krypton! No, no, no! He’ll do the farming himself (act of douchery number four: use of superpowers for trivial purposes like getting a kid to try out for a baseball team).

So, after Superman farms the Doborak place, Stan has changed his mind and wants to go with Lois and Clark down to Florida. Oh, one problem, when Clark gets down and tries to talk up Stan to the manager of the Metropolis Ravens, he’ll have none of it, no doubt knowing full well that There Is No Such Thing As A Pitching Prospect (TINSTAAPP). So, Clark decides to just stroll around town, when suddenly he comes across one of the Ravens’ star players getting into a barfight. Actually doing his job for a change, he writes about it.

This does not go over well in the clubhouse. At all. I mean, there’s a reason why we never learned of Babe Ruth‘s womanizing, Mickey Mantle‘s drinking and Joe DiMaggio‘s abusive relationship with Marilyn Monroe, and we learn the reason here. Apparently, if somebody back in the Golden Age dared to reveal the wrinkles of baseball players, they’d get their butt kicked and, if one of these panels is to be believed, get spanked. Ew.

Oh, and just for good measure, Stan Doborak punches Clark out too, after being told he’s not welcome because he’s friends with that jerk Clark Kent. As Doborak leaves for the train to go back home, Lois slaps Clark for ruining everything:

Wow, what a downer of a story. I mean, Clark Kent totally ruined everything by basically doing the one thing he does in the entire story that, y’know, a sane person would be expected to do. Clearly, that isn’t going to work, so it’s time for Superman to get involved again, and that leads to act of douchery number five: kidnapping a guy from a moving train. Doborak, to be more specific:

Yeah, Superman, you use your “tremendous powers to help people”. Not sure how convincing a kid who clearly isn’t interested to become a ballplayer is one of those uses. Then again, you say “often”, which doesn’t mean “always”, so I guess you are still technically telling the truth.

Anyway, faced with saying no to a god-on-Earth, Stan decides that, yeah, he’ll be a ballplayer. So Superman commits his act of douchery number six: sneaking Stan into the stadium and stealing a uniform for him to try and get on the field.

And, what do you know? The plan works! The Ravens decide to humor the kid and take BP off him, at which point Stan makes them look like idiots. Impressed by this, the Ravens offer Stan a contract and Stan’s newfound leverage allows him to get Clark back into camp for the story. You would think this is the end, but in reality, it is just the beginning of the final act of the story, as we see how fame threatens young Stan Doborak’s career!

And what a early career it is! For example, at one point he throws a 18-K no-hitter, which, assuming he only gave up one walk, would give him a game score of 105, which would equal the 20-K one-hitter that Kerry Wood threw in 1998 as the highest 9-inning game score in history.

But, alas, this fame gets to Stan Doborak’s head, and soon, he is fighting his teammates, snubbing the reporters who got him his shot at the big leagues, and, what’s more, fallen in love with a femme fatale named Mabel Dawson, who tells him that she will do all of the brain work.  So, Lois tells Clark to do something about it and steal Mabel away from Stan, or something. Yeah, because that makes total sense and is totally ethical, and, uhm, why exactly would mild-mannered reporter Clark Kent be able to steal the girlfriend of a big league ballplayer?

Oh, screw it. So Kent sends her flowers, but, we find out, Mabel has some sort of mysterious benefactor, who she speaks to on the phone as she gets dressed:

Of course, it’s a trap, and as soon as Clark comes up some mobsters show up and kidnap him, since that’s what mobsters in these comics do when somebody is stupid enough to go visit a femme fatale without backup. And, just as every single mobster group seems to do in these comics, they then bring the hero straight to the boss, thus allowing us to learn basically the whole plan. And who is behind all of this? It’s a mafioso named Mike Caputo, who then promptly throws Clark in a nearby closet, where, well, one guess what happens next. Hang on a second I’ll wait.

Did you guess that Clark would turn into Superman, go grab Caputo and then force him to give away the whole plan?

Well, then you are absolutely correct! 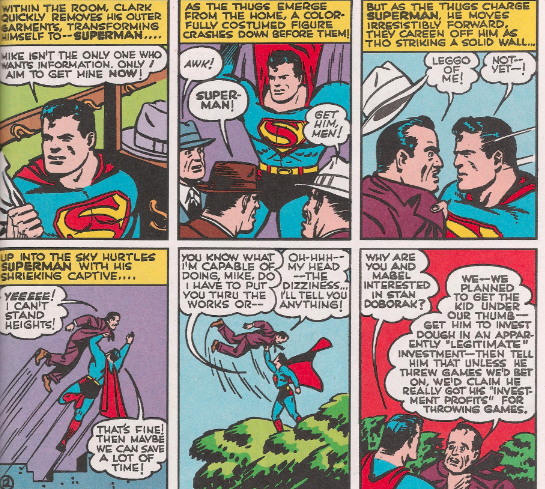 Yes, it turns out that Mike and Mabel were running the standard “try to get games fixed” scheme. Oh, there are a few differences from the usual, but in general, the ultimate aim is the same. And, well, you can guess how the story ends after that: the plan is foiled, Stan learns not to fall for femme fatales, and, in the end, Lois and Clark watch a ballgame:

And so, the comic ends. Stan Doborak goes on to be a star, and all because Clark Kent/Superman did at least six douchey things. I have to presume that during this comic story Lex Luthor took over South America, or something. But that isn’t important, because Superman was able to get the Metropolis Ravens a good pitcher.

And, really, in the end, does anything really matter other than baseball? What’s that? There are things? Yeah, well, don’t tell Golden-Age Superman that.

Next Time on Bizarre Baseball Culture: Another Superman story, this one a bit more recent.

33 thoughts on “Bizarre Baseball Culture: Action Comics #50 has Superman being a Superjerk”