Comic Book universes are huge and diverse, going through countless genres and containing both nitty-gritty realism and utterly fantastic science fiction or fantasy. And yet, they all take place in the same universe, no matter how different they seem. You can get a idea of just how crazy this is by looking at Marvel’s movie/TV empire, where Daredevil and Guardians of the Galaxy are both taking place in the same universe despite the fact that one of them is about a guy beating up mob bosses (and the occasional ninja) while the other one has both a talking raccoon and a talking tree.

However, as a result of this, sometimes characters get lost in the shuffle. They are technically part of the universe, but they rarely interact with it. Maybe it’s because their adventures are on the more mature side, maybe they are stuck in another dimension that the usual heroes don’t go to so often, or maybe, they aren’t seen because that’s just the way they want it…

Such is the case of Christopher Chance, AKA the Human Target. He’s not a completely unknown character- he’s been the subject of two short-lived shows based on his comics (the most notable being a two-season FOX series starring Mark Valley and James Earle Haley), but he’s firmly in the D-list of DC Comics. And those were both pretty different from the comics and had little indication of taking place in a world of DC Comics. In fact, when it was announced that the Human Target would be coming to Arrow, some people were surprised to find out that he even was a DC character. That’s probably because he doesn’t interact with the rest of the DC Universe all that much. Or maybe he does, but we just don’t know it.

Because, you see, the Human Target is a master of disguise. He becomes the would-be assassination victim using heavy prosthetic-work and a knack for copying voices and body language. And in this installment of Bizarre Baseball Culture, Christopher Chance figuratively steps up to the plate:

The fourth and fifth issues of the third volume of Human Target, entitled “Take Me Out To The Ball Game”, were published in late 2003 under DC’s Vertigo (mature audiences) label. Written by Peter Milligan and with art by Javier Pulido, it’s a dark tale involving gamblers, steroids, and murder. And yet, technically, by virtue of Christopher Chance’s earlier appearances in books with the DC superheroes, it technically is happening in the same universe as them. Weird, huh?

Anyway, first off, the first part of this two-part story is, obviously, Human Target #4. It is entitled “Part One: The Set-Up Man”. We begin with the life and death of New York star Ruben Valdez: leaving everything behind in Cuba, he has been figuratively and literally “running” ever since as he’s pursued a Hall-of-Fame career in the USA. 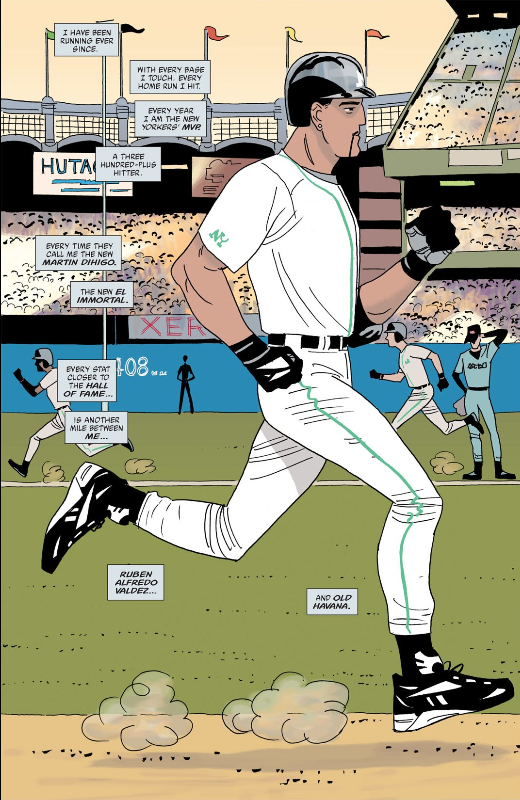 However, there is trouble. Shortly after leaving the clubhouse (after a conversation with Larry McGee, a player who has a career in decline and won’t go partying because he’s a married man), Ruben is found and kidnapped by a group of gangsters. They want him to throw a game, and when Ruben tells them that he’s gone through too much and literally swam with sharks to escapes Cuba, so he’s not going to go swimming with them.

However, the gangsters have leverage: Valdez met with a “German” shortly after he broke into the majors, and the German made sure to tape his business dealings.

But does Valdez throw the game? No. He hits a home run, and then leaves the clubhouse, goes home, and commits suicide by jumping out of a window.

Needless to say, the sudden unexpected suicide of his top slugger befuddles the owner of the New Yorkers. So, he brings in Christopher Chance, who, it should be noted, isn’t much of a baseball fan and is even less of a fan of how owners treat players:

Still, Chance agrees that something strange was going on, and agrees to go undercover as Larry McGee, the player who is well on his way to being washed up and who basically never plays. Of course, there’s the problem that Chance doesn’t know how to play baseball and so he’s going to need a crash-course from McGee. So, McGee leaves his family and tells them he’s going off to train. His wife is suspicious and wonders if this has anything to do with Ruben. This gives Larry pause…

And then we learn that it wasn’t Larry, it was Chance. As he explains to Larry…

Yeah. It was Chance pretending to be Larry just to see if he could fool the wife and kid. Really, the entire idea of Human Target is kind of creepy and full of unfortunate implications, which is probably why the Mark Valley series changed it so that he was just a really good ordinary body guard. Also, Chance asks Larry about the Ruben thing that his wife brought up, and Larry says at one point he was a bit worried that she may have been having an affair with Ruben.

But anyway, Chance then goes undercover with the New Yorkers. He hears the gossip, the insults, the innuendo… and also how much money Larry McGee makes. Meanwhile, our mobster antagonists and their German steroid-peddler are having an argument because of how Ruben’s suicide went against the original plan. It is revealed that they have other tapes of drug deals in order to blackmail stars. Also, McGee hurts his leg jumping out of the way of a car while walking around outside of Chance’s safehouse, which Chance specifically told him not to do.

Yeah, things are moving fast, and that continues in the next scene, where Chance (as McGee) is shot at by gangsters when he tries to case Ruben’s apartment. After shooting his way out, he finds a tape, but before he gets a chance to look over it, he gets a call (for McGee) that due to injuries he has to play tomorrow.

This is a problem, because Chance sucks at baseball. Chance tells Larry that he can’t do it, but Larry says he has to. It’s his last chance to make a comeback!

Cut to a day later, and we see Chance (as McGee) stepping up to the plate after a crash-course in baseball… over one day. How hard can it be, he wonders? 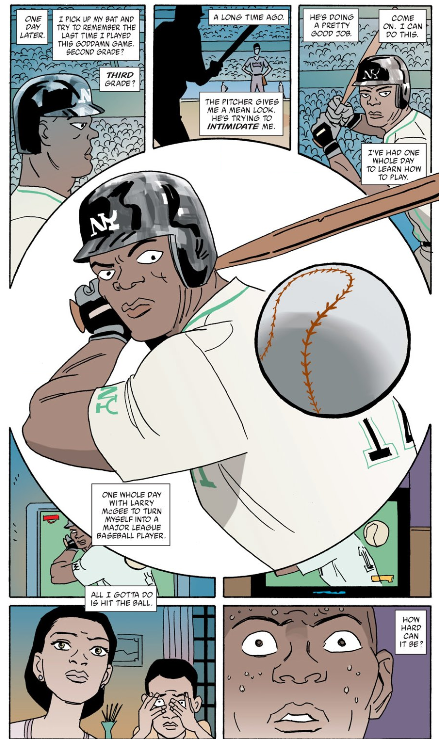 And that ends Part 1… Part 2 (entitled “The Strike Zone”) picks up right where we left off:

We then cut back to Larry trying to teach Chance how to hit. It doesn’t go well at the abandoned field they go to. Eventually, Chance just gets sick and goes to watch some old game film of McGee. This is a cool sequence, as he cuts down the process of a baseball swing in small fragments and both he and the real Larry McGee realize what changed with McGee’s swing and how he can get back to what he once was, as Chance in some ways morphs himself into McGee into his prime: 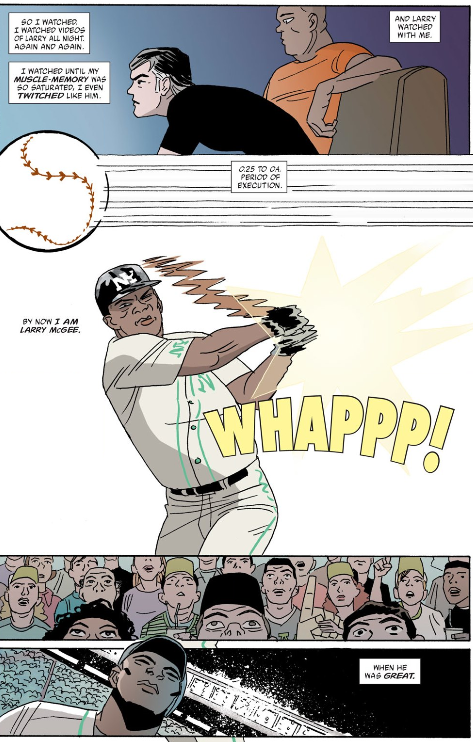 Yes, Chance-as-McGee goes gangbusters at the plate, hitting two home runs in one night, and we cut to him in bed with Mrs. McGee, who admits to him that she did see Ruben Valdez, but it was only to see if he had any advice to help Larry get back into all-star shape.

Oh, sorry, got sidetracked there. Chance-as-McGee gets a call from the mobsters, who attempt to blackmail him with videos of him buying steroids. Needless to say, Chance is not happy about this complication, and he tells McGee so: 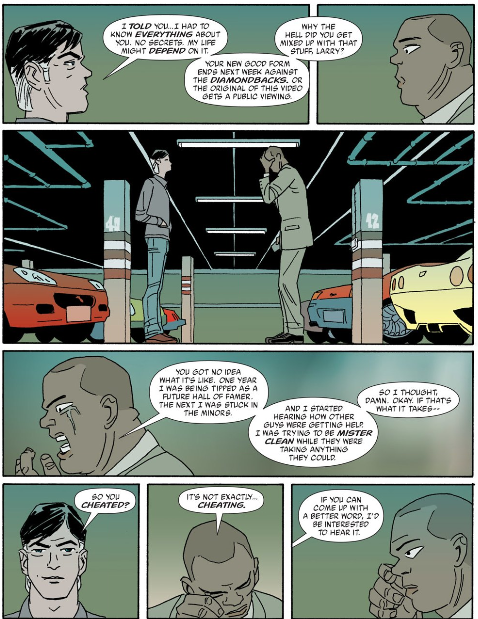 Chance tells him that he can throw the game and be safe, or go ahead and play well and worry about the consequences.

McGee goes and tells the mobsters to shove it, and he goes and plays well.

So they kill Mrs. McGee. Because they are evil like that. Needless to say, the time has come for Chance to bring vengeance to those who did all of this. And he does it with a flair for the dramatic…. killing the mobsters while impersonating the Ghost of Ruben Valdez:

After this eruption of violence, it’s just a slow ending, as the wreckage of the events fall into place: Chance finds the blackmail library of steroid tapes but burns them, as he understands that he can never truly understand the pressure and desperation that the players face. He also finds some evidence to suggest that maybe Alisha McGee did have an affair with Ruben Valdez. And so, he tells the owner of the New Yorkers that he couldn’t figure anything out, and leaves New York for destinations unknown, ending the story…

In some ways, this tale is much like many of the other previous comic book stories. However, it is also quite different thanks to it’s more mature tone. Perhaps the biggest difference is that it’s not exactly a story with a happy ending- everybody involved is either dead, has suffered the death of a loved one, become greatly disillusioned or end it without any answers. What’s also different is that it’s much more morally ambiguous: some of the actions that Chance or the others take would never have flown in a more “all-ages” comic or an older story. Still, it’s a neat concept and it’s done alright.

40. “Challenge of the Headless Baseball Team!”

47. Cleveland Indians Strikeforce vs. The Scatman

3 thoughts on “BIZARRE BASEBALL CULTURE: Take “The Human Target” Out To The Ballgame”