With the upcoming release of Captain America: The Winter Soldier, now is the best possible time to unleash upon you not one but TWO stories featuring the Super Soldier of World War Two. One of them features Cap back during the “Golden Age” of the 1940s, while another takes place after he had been unfrozen from a decades-long ice-sleep.

And, man, what a doozy this one is, from Captain America Comics #7 in October 1941 (I read it as a reprint in a 2009 commemorative issue celebrating 70 years of Marvel comics). This is very early in the history of Captain America, before his trademark shield had it’s most notable look and even before Pearl Harbor. Yes, Captain America was punching Nazis before the United States was even in the war. No Nazis in this story, though, nor are there any Japanese or Italians. No, this story has Captain America and Bucky face off against the hooded villainy of… the Black Toad! You know of the Black Toad, right? Right?

Anyway, this is in…. DEATH LOADS THE BASES.

(This story is credited to Joe Simon [writing] and Jack Kirby [art], the creators of Cap. I talked a bit about Kirby in the Stuart Taylor comic.)

We begin with a splash page, as Captain America stands in the batter’s box against the Black Toad, who’s visual look can basically can be described as a guy who wearing a cross between KKK robes and the world’s worst Batman costume. At first and third, though, we see innocent ballplayers being dragged into the grave, while the umpire is A SKELETON. 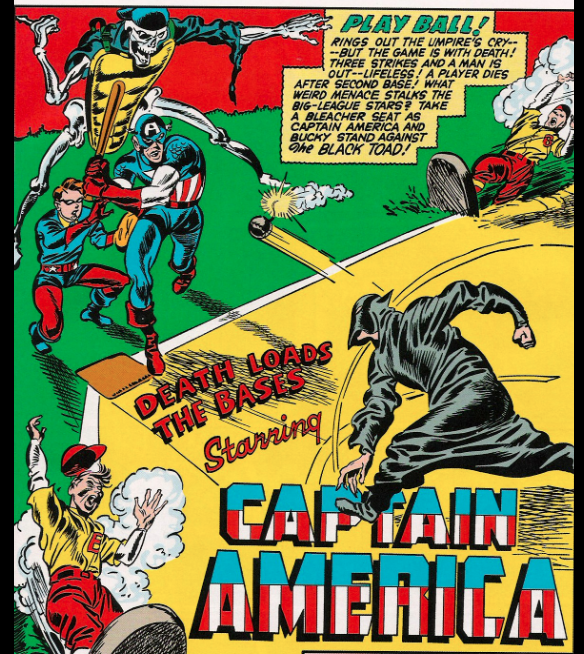 Also, what the heck is Bucky doing as a catcher for the Black Toad here? I mean, it’s not like Bucky is evil. I mean, jeez, he was basically Marvel’s version of Robin right up until he bought it near the end of the war and then became one of, like, five comic book characters who NEVER came back from the dead. (Winks)

On to the story proper, where we see a unseen man (we only see the back of his head) trying to shake down “Bernard Riggley” (ah, thinly-veiled names…), owner of the Brooklyn Badgers, for an ownership stake. He even threatens Adams and “Diraggio”, the team’s star players. But, Riggley will have none of it and kicks the mystery man out.

So the next day, in the locker room of the Badgers. Manager Chuck McArthur tells the team that they won 12 games in a row, and he fully expects them to win 13. Except, wait, that creepy trainer in the corner!

And, as you can see, Steve Rogers and Bucky Barnes are also at the game. Where, well, JOE DIRAGGIO IS MYSTERIOUSLY MURDERED AND THEY PLAY THE GAME ON ANYWAY: 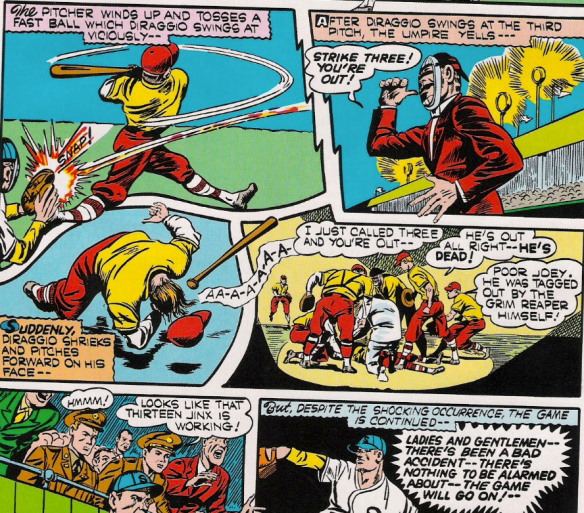 This, by the way, is the second time a Joe DiMaggio stand-in has been murdered in a Bizarre Baseball Culture. Interestingly, that also was in a comic involving a patriotic superhero.

Oh, and on the very next page, Adams dies… FROM A POISON DART: 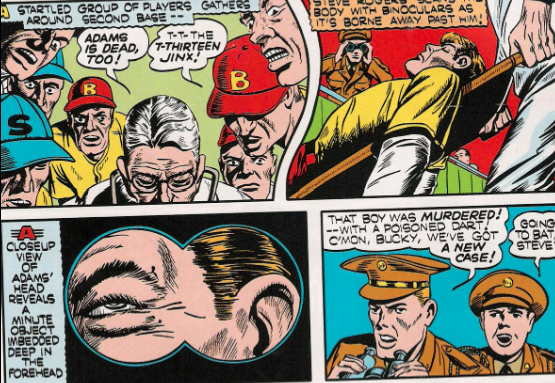 And so, Cap and Bucky jump into action, quickly finding the Black Toad in a little hideaway near the dugout…. at which point America’s finest Super-soldier and his sidekick get their asses kicked by dudes with baseball bats:

Good thing the Black Toad just assumes that hitting the Star-Spangled Man with a Plan will be destroyed by being knocked on the head by a bat. Yup, nothing more to worry about, so let’s leave.

Anyway, the next day, as the best remaining player for the Badgers refuses to take the mound, Cap and Bucky show up and, of course, offer to play. And, of course, the offer is accepted, despite the fact that the Badgers- and the league office- have no idea what these people’s real names are or how old they are or… anything else besides the fact that they are Captain America and Bucky. Oh, and one would think there’d be a problem with a super-serumed pillar of the peak of human ability playing, too. But, hey, nobody cared about steroids back in the 40s.

As you can guess, Cap and Bucky kick butt, with one fan declaring randomly that he’s a wizard. Y’know you are doing something right when stuff like that happens.

Of course, this domination just won’t do, which is why the Black Toad sends in one of our favorite Bizarre Baseball Tropes… THE EXPLODING BASEBALL!

The Toad then jumps out and tries to get away from Cap and Bucky by running into the Badgers’ dugout. After a big fight (which sees Riggley die of a heart attack or something), and it’s time to see who is behind the mask. It’s the creepy trainer, right? Right? 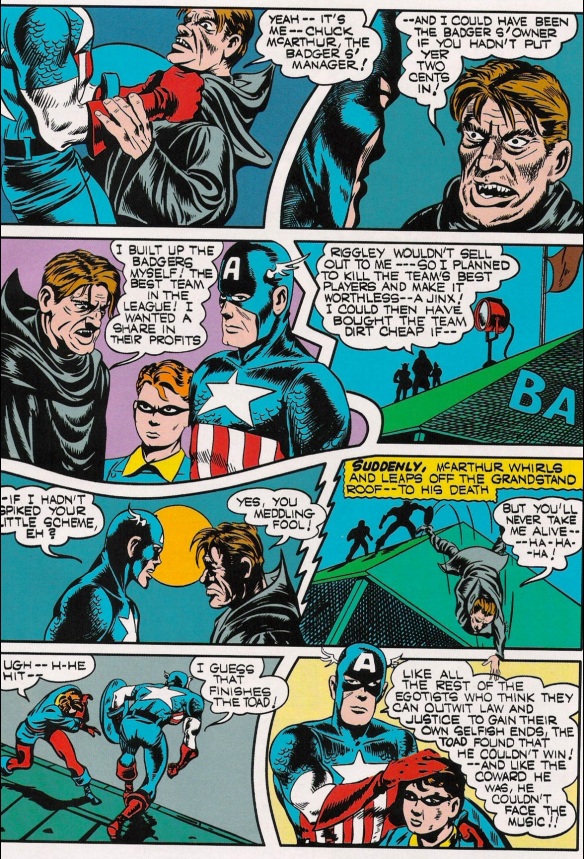 ..Okay…. so it was actually the manager. Who had no foreshadowing whatsoever, while the trainer was basically a gigantic red herring.

But, still, Captain America, everyone! Saving baseball from a crooked manager (after two players are murdered, but, hey, nobody’s perfect). Come back next time as we see Captain America save a young ballplayer from the dangers of drugs!

27. Captain America in “Death Loads the Bases” (you are here)