Steroids and other performance-enhancers are, to sports, a plague. They provide some players an unfair advantage, threaten the integrity of records, and could also endanger the long-term health of the user. The great struggle of 21st century sports has, in many ways, been the struggle against PEDs.

But, as today’s installment of Bizarre Baseball Culture shows, the the view that PEDs are bad goes against human nature and human fantasy. The human experience, the human dream, has always been about becoming better. It is one reason why, for example, that larger-than-life heroes have been popular since ancient times.

So it is perhaps not surprising that fictional superhumans (who by their nature are better than human) have often gone hand-in-hand with PEDs (which by their very nature make the user better than the average human). Steve Rogers, for example, became Captain America after being given a Super-Soldier Serum by the American government. Bane, the villain who once broke Batman’s back and appeared in less-steroidy form in The Dark Knight Rises, got his great strength from a drug known simply as “Venom”. Even Popeye, with his spinach, could be said to be using some type of performance enhancers.

But few stories actually have an athlete using a PED… but I have found at least one, featuring the obscure hero Dash Dartwell (sometimes called “The Human Meteor”), a college athlete who has gotten “Metabo-tablets” from a biochemistry professor that make him superhuman until the pill’s effect wears off.

Amazing Man Comics #22, the issue from May 1941 which contains this story (it starts on page 41), can be found here. Go below the jump for the rest of this installment of Bizarre Baseball Culture.

The writer is unknown, but the art was done by Harry Francis Campbell, a prolific but non-too-special artist during the early days of comics. So, anyway, here we go:

The first panel of the comic tells us basically everything we need to know, about Dartwell and the fact that Dravrah and Elay (read those two names backwards) are about to play a big game:

Okay, now, uh, besides the fact that those are perhaps the least original fake-college names of all time (again, read them backwards), what is up with the hockey puck at the top above the ditty about Dartwell’s powers and origins? Was this supposed to be a hockey story originally? Or is that meant to be something else entirely? I dunno.

Anyway, as has happened previously in Bizarre Baseball Culture, this story involves organized crime getting involved. While this is hardly surprising, since they were one of the four standard villains of 1940s comics (along with “Nazis”, “Japanese” and “Mad Scientists”), what is interesting here is that they are going after a college baseball game, which I’d presume wouldn’t have that much gambling action on it.

I mean, look at how they plot to get lots of money by fixing the game by…

This, by the way, seems a rather crummy plan. I mean, seriously, of all the ways you could try to fix a baseball game, kidnapping the five best players of the team you want to lose seems a bit too overt. I mean, it seems like a good way of getting everybody to notice you. Not to mention you’d think that having five players missing would be a good way of, I dunno, forcing the whole game to be cancelled. So, anyway, the master plan is put into motion, and before long, the five stars of Dravrah have been kidnapped. And then, for reasons I cannot even begin to fathom, the gangsters send a note about it to the Dravrah coach. 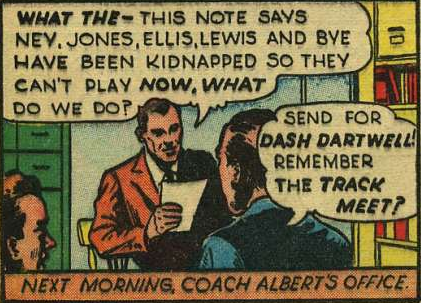 Yeah, because, clearly, if you have kidnapped five baseball players specifically to fix a game, you would then write a note to the school saying specifically that that is why you kidnapped them. I mean, seriously, don’t even try to get some ransom money out of it or anything.

Anyway, Dash Dartwell is quickly notified in order to go investigate and save the five players, right? Wrong! 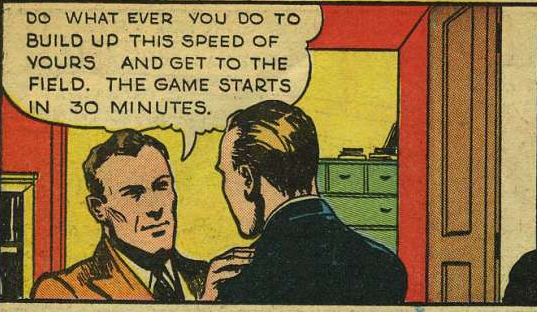 He’s told to go to the field in time for the game, and to make sure he has built up his speed.  So, no, don’t go rescue the other players, go and juice up and then go to the ballpark to play in the game. So, yeah, don’t just ignore for now that five young men have been kidnapped, but go take your wonder-pill and go play a baseball game.

Oh, but wait! One of the gang’s flunkies overhears all of this and calls the boss. Dash overhears this, but after taking out one of the flunkies he is overwhelmed and taken captive by other mobsters… but not before he takes his pill:

Now, keep in mind this is before he is kidnapped by the mobsters and brought to a car that presumably is heading straight towards where the other five players are. So, thirty minutes later, as he begins to feel the power of the metabo-tablet, you’d think he’d just keep that a secret until he was brought to the hideout, at which point he’d then beat up the villains and rescue the players… right? 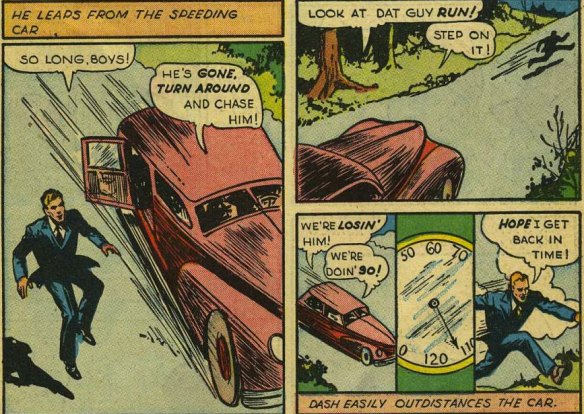 Instead, he just runs all the way back to the game. Y’know, because beating Elay is far more important than rescuing five kidnapped ballplayers. And, once again, he better use his PEDs. I mean, look at this exchange:

“Take another pill, and play right field for a couple of innings!”

“Take another pill, and play right field for a couple of innings!”

Great going coach, don’t just ignore the fact that you have five players kidnapped, or that you are using your best chance at rescuing them in a baseball game instead of having him look for them… encourage that best chance to cheat and abuse a performance-enhancing drug. Role model of the year!

So, anyway, as can be expected, Dartwell dominates the game, even taking time to take out an assassin hiding in the stands:

He then proceeds to hit a home run to win the game, of course. And then, then, he decides to interrogate some of the mobsters to find out where the other players are being held, at which point he super-runs all the way over to their hide-out and saves the players:

By the way, look at that final panel. The police captain asks Dash to become a full-time Superhero, and Dash says “Too busy.”

Spider-Man’s motto is “With great power comes great responsibility”, but Dash Dartwell apparently never heard of that. He’s apparently too interested in using his super-pill to win baseball games and break track-and-field records… which, sadly, is probably the most realistic thing in this whole stupid comic… and also, come to think of it, what Spider-Man did originally before that burglar shot Uncle Ben. But I digress.

So, this ends another installment of Bizarre Baseball Culture, where today we learned it’s totally okay to use PEDs to win a college baseball game, and not only that, using said PED to win said baseball game is more important than using your great powers to rescue people who are in danger. After all, you can just go rescue the hostages after the game.

Y’know, the usual morals you’d want to pass down to children.

8. Dash Dartwell’s PED use for justice (you are here now)