Last time on Bizarre Baseball Culture, we took a look at Pinky and the Brain‘s baseball episode. This time, we are looking at the classic Disney short, How To Play Baseball, starring Goofy. It’s available on Disney’s website. 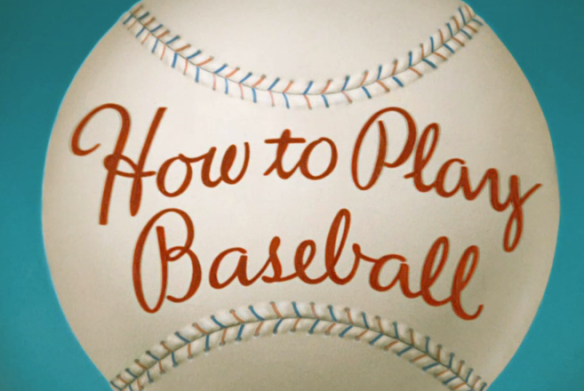 Yes, How to Play Baseball, first released in 1942 to time with the release of Pride of the Yankees, it is one of the classics of the Disney canon, the first of a series of Goofy cartoons in which he tried to play or learn a sport, skill or occupation. While most of the information given in it is more-or-less true, the visuals are exaggerated and done for comedic effect. And, rest assured, this cartoon is hilarious, standing alongside Baseball Bugs as an example of anthropomorphic cartoon animals playing our national game.

We begin with talk about how baseball is the grand American game, and then jump to the ball itself, where we are shown a nice cutaway diagram of what the innards of a ball looks like: 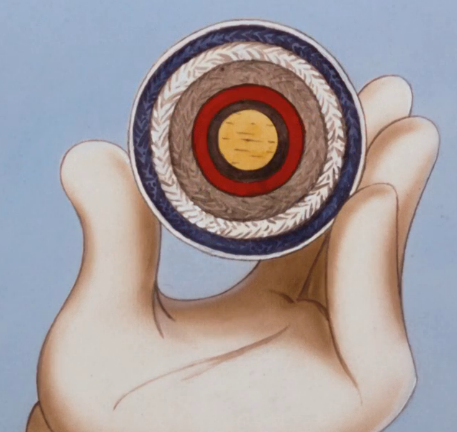 After similar appearances by the bat and the glove (which, comedically, is shown to look more like a mattress on the inside than an actual glove), as well as a quick primer on the stadium and field itself, it’s on to the positions and what happens on an ordinary play (in this case, a double). This, above all us, shows us why football-style telestrators have never been as popular in baseball:

After that, we move on to the players and their uniforms. The sox (or, rather, stirrups, since this was back when men were men and ballplayers wore stirrups), of course, are what the team is named after, and ballplayers wear spikes and….

Hang on a second…. is that a human toe? We’re looking at Goofy modeling this, and yet we are seeing a human toe there. Goofy isn’t a human being, he’s an anthropomorphic dog. I can get him having human-style feet or something as an artistic choice, but the idea that he has human toes, completely naked and fur-less… that’s bothering me. It’s bothering me a lot.

Anyway, the narrator then moves on to pitching, noting how all of the strange movements that pitchers do are of the utmost importance. Various visual puns and gags are done- seriously, watch this yourself, since parts of it are hard to really summarize.

After this, we see the batter. The opposing team- indeed, every player on both teams- is also Goofy. As in, the character Goofy. I mean, they are goofy with a lower-case G as well, but… oh, you get the idea…

Goofy going through the Jeterian motions in the batters’ box when coming to the plate.

Our narrator then moves on to types of pitches, such as curves (which red-Goofy can’t hit), the “spinner”, the slowball (which stops in mid-air before the plate), the spitball (the pun that goes with that one is so obvious I’m not even going to put a picture up), and, of course, the “speedball”.

With all of that out of the way, we move into the closest thing the pseudo-documentary has to a story, as we cut to the final game of the World Series!

This cartoon foresaw Disney’s purchase of Marvel decades ahead of time.

It’s a goofy (pun intended) three-or-so minute sequence too wacky for me to explain here (it’d take the fun out of it) where we see our pitcher give up a 3-run lead, only for a big final play at the plate that can only be solved by “the umpire, that impartial pillar of judicial dignity, who’s word is law.”

Needless to say, the two Goofies don’t much like the result: 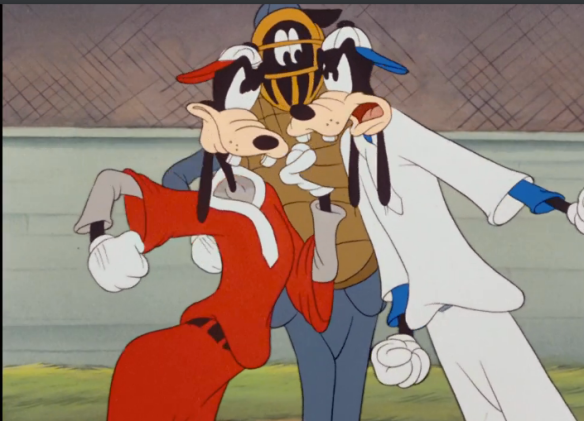 And so, How To Play Baseball ends with us being reminded by the narrator that free speech is another great American value, and that is just one more reason why baseball is the great American game!

36 thoughts on “Bizarre Baseball Culture: Goofy shows us “How To Play Baseball””