Last time, we looked at a Superman-and-Baseball story from the Golden Age. Today, we are looking at something more modern: Superman Adventures #13, an issue from November 1997 and part of a series based on Superman: The Animated Series, which was on the WB Network (remember them?) at the time. Now, much like the Batman cartoon of the time that I talked about in the opening paragraphs of the Cal Ripken comic, it was an awesome show. It was a masterpiece, not just a great kid show, but a great show period, the best adaptation of the Man of Steel and not one to underestimate it’s audience. It’s the only kids show I remember growing up that actually killed off a relatively important character and never brought him back from the dead.

While Superman Adventures #13 isn’t quite up to that standard, it’s still a very good and fun story about Superman having to fighting aliens at a baseball stadium, and, really, what more can you ask for? It’s well worth the 99 cents I paid for it on the Comixology app on my iPod.

(GO BELOW THE JUMP)

Okay, let’s start with the cover:

This cover is awesome. Great image that tells you basically everything you need to know about the comic: it’s about Superman fighting an alien in a baseball stadium. It’s a no-nonsense, what-you-see-is-what-you-get cover, and it also pays tribute to an old DC Comics series called Strange Sports Stories. All in all, very nice.

So, now, into the story itself, where we begin with a little bit of slice-of-life in Metropolis: Superman throwing out the first pitch before a World Series game between the Metropolis Meteors and the Gotham Knights: 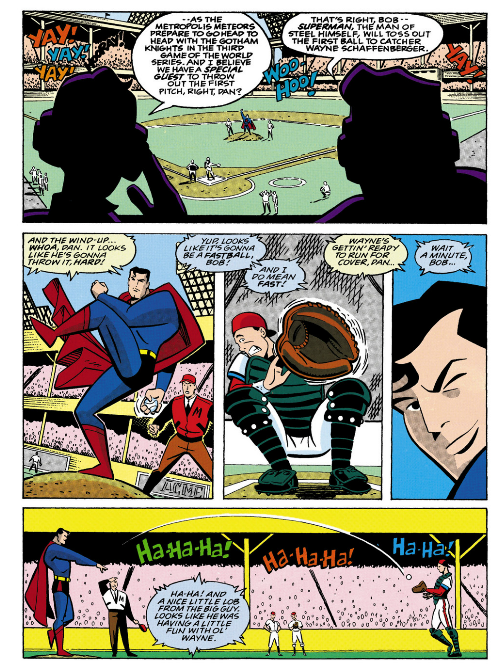 So, a few things to note on this first page:

Anyway, after throwing out the first pitch, Superman goes up and meets with Lois Lane and Professor Hamilton of STAR Labs. There’s a bit of exposition about how they are surprised that Hamilton is there, given that he’s not much of a sports person, leading him to leave in a huff when Lois implies he must have been picked on back in gym class. Of course, we are then interrupted by… well… 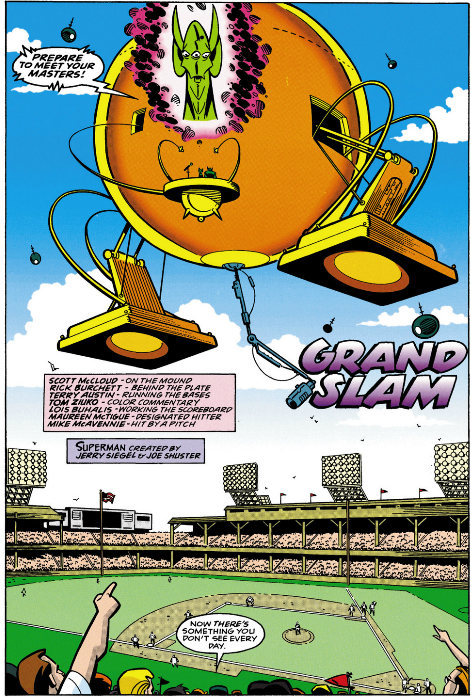 So, what do these Alien Overlords want with interrupting the World Series? Well, I’ll get to that in a second, because first I want to give some props to how they named Scott McCloud as writer, Rick Burchett as penciller, Terry Austin as inker, etc Instead of just saying what each of their jobs were, they did it baseball style:

Oh, right, the Alien Overlords. Turns out they like going from planet to planet holding something called “The Nebula Cup”, in which each planet’s champion must compete against Grogg, the champion of these three-eyed green invaders. Earth wasn’t supposed to be on the list, but they got a recommendation from Lobo to come and face Superman.

So, with no other choice but to take part in this best-of-3 gladiatorial contest. Yeah, interstellar gladiatorial games are best of three. You should know this already, damnit, just in case somebody ever arrives and challenges us to the Nebula Cup. Personally, I think our champion would be the Ghost of Theodore Roosevelt or maybe one of those Bo Jackson clones we have at Area 51, but that’s just my opinion.

Anyway, the first part of the contest involves energy sticks. Problem is, Superman has no idea how it works, and neither do the announcers, until Professor Hamilton Batmans his way in from the shadows. Too late, though:

Round 2 brings perhaps the most awesome thing in this comic: anti-gravity batons. But, really, they are anti-gravity baseball bats. I mean, look at this:

Hamilton is able to figure this one out pretty quickly and let Superman know (after he is briefly sent to orbit) about it, and so Superman ultimately wins by using the gravitic fields around it to spin Grogg into submission. And, with that win, the fight is tied at one, leading to one more round for all the marbles: Boxing. The fight-game. The sweet science. Pugilism….

With high-tech gloves, of course. Ones that can fly and change shape and density. Not surprisingly, the fight begins badly for Superman, and by extension humanity. Also, WMTR is able to get a plug in for their sponsors too:

Superman, perhaps sensing that this comic is sort of getting close to an end, decides to just ditch the gloves, fly at Grogg as supersonic speed, and then start pounding the crap out of him while giving a badass speech. Seriously, read it:

Don’t mess with the Man of Tomorrow, but do press the above for a bigger picture.

So, as the victor, Superman is given a little golden ball as a trophy. Problem: The little golden ball has the density of a neutron star, so even though it is the size of a baseball, it weights about as much as, as Hamilton says, “a thousand battleships”, which seems a bit low. No matter the weight, it’s a bad thing, especially since not even Superman can lift a neutron star, so it’s not looking good for Metropolis.

But, wait! Remember that anti-gravity bat? If only somebody could hit the neutron-star trophy with it! Except all the players have run away and Superman is already falling, so it comes down to Professor Hamilton, who despite being haunted by the memory of those schoolyard bullies is able to hit out of the park and save Metropolis! 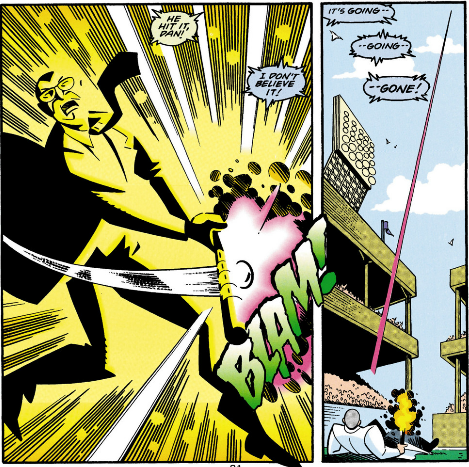 Oh, and the ball hits Lobo on the way out of the Sol System, which he totally had coming.

And so ends Superman Adventures #13, which is a way better comic than the one back in the Golden Age, if only because it doesn’t involve Superman being a jerk.

Next Time on Bizarre Baseball Culture: We class this place up with a review of some actual literature. Don’t worry, this monstrous change will only be temporary and we will return to comics and television after that.