What if I told you there was a comic about Doctor Doom invading 90s Miami in order to kidnap Jeff Conine, only to be foiled by Spider-Man and Billy the Marlin? And what if I told you that Robb Nen also had a brief cameo? Would you be interested in this comic?

Well, seeing as how you are currently looking at this, the answer is probably yes. And, guess what? You are in luck, as this comic does exist: 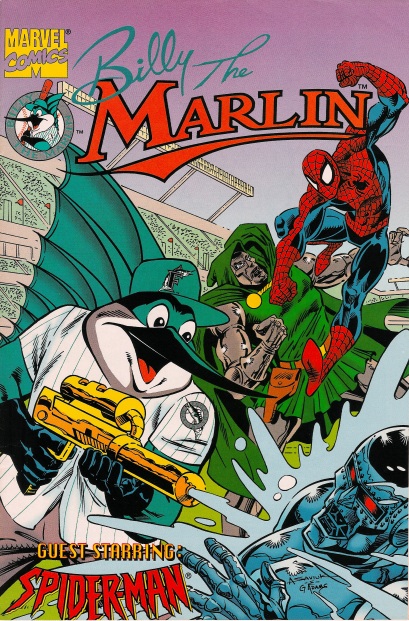 Yes, it’s time for Bizarre Baseball Culture to jump into Billy the Marlin, guest-starring Spider-Man! Read below to see the background of it, or go below the jump for an overview and analysis:

The comic, as far as I can tell, was given out in either 1996 (that’s the copyright date in the book and also fits with some of the Marlins portrayed) or 1999 (that’s where it’s listed on some online websites, but doesn’t fit since Conine and Nen weren’t on the 1999 Marlins team) for Billy the Marlin’s birthday, a nice little treat for kids who were at the Marlins game. Based on what I could find, Billy the Marlin’s birthday is usually celebrated in August, so presumably this comic came out in August of 1996 or 1999 (I personally think 1996).

The writer and colorist of this comic was Mark Bernardo, who primarily worked as a colorist and editor at Marvel during the 1990s, primarily in Spider-Man books- he was one of the many cooks in the kitchen during the disastrous “Clone Saga” (which was apparently so complicated both in-story and out that I don’t quite understand it even from what I can find online).

Pencilling the story was Alex Saviuk, a prolific artist who is, according to the “Comic Book DB”, best known for his work involving Spider-Man, including a Sunday newspaper strip.

Greg Adams did inks, Janice Chiang did letters and Glenn Herdling was the Editor. All three had plenty of experience in comics.

End of background, go BELOW THE JUMP for overview and analysis (Warning: image-intensive!):

Our tale, entitled “Fields of Doom”, begins on an ordinary day in Joe Robbie Stadium (this was before it was renamed Pro Player Stadium, Dolphins Stadium, Dolphin Stadium [no 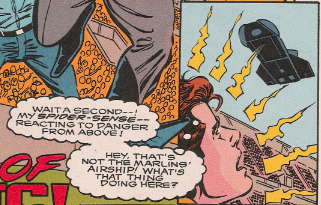 Wait, the Marlins had an airship?

As could be expected, the airship belongs to our villain for the issue: Doctor Doom. Although usually connected to the Fantastic Four, Doom is not picky when it comes to

enemies, and often is willing to pick a fight with anyone who dares stop him. And, what’s more, as ruler of the small Eastern European nation of Latveria, Doom has diplomatic immunity! That isn’t really mentioned in this story, but Latveria is. Because, you see, the objective of Doctor Doom is to… 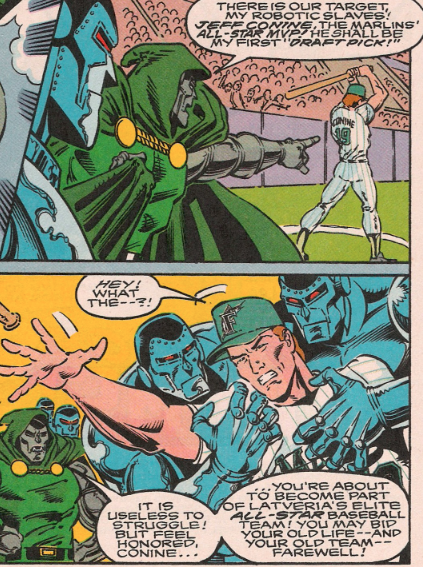 Click above to see these panels in all of their glory.

You would probably find it weird that Doctor Doom would be interested in baseball whatsoever, since Latveria is an Eastern European country that is hardly in baseball territory. And you would probably find it unusual that Doctor Doom would go and grab Jeff Conine first and not, say, Greg Maddux, Barry Bonds, Cal Ripken Jr. or that young rookie Derek Jeter. Well, the answer is simple: The four aforementioned players are actually superheroes in disguise. But that’s for a future Bizarre Baseball Culture. Yeah, how’s that for a hook?

Anyway, as Doom and his Doombots (assuming Doom himself isn’t actually a Doombot- but I digress) kidnap the MVP of the 1995 All-Star Game, Peter Parker tells his family he has to go to bathroom. But, don’t worry folks, for while Pete changes into his Spider-Duds, Billy the Marlin is on the case, leaping into action using a fishing hook (not included in the database entry due to space limitations) and calling a Doombot “Clyde”, just like the great heroes of legend. But, like all great heroes, Billy the Marlin does not fight alone, for on the scene comes the amazing, spectacular, sensational, avenging, ultimate, friendly neighborhood Spider-Man! 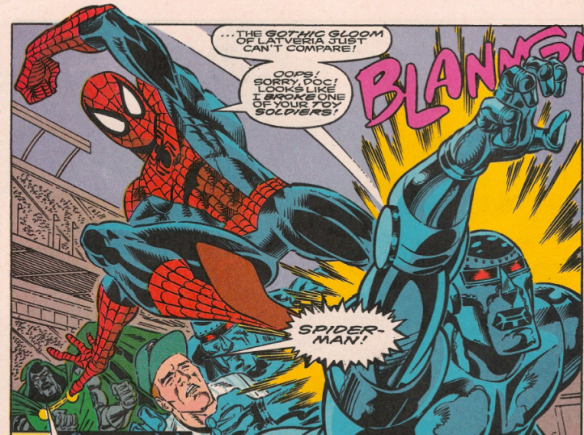 With the arrival of the Web-Slinger, Doom realizes he’s on the ropes, and decides to cut

his losses, ordering his Doombots to hoist Conine into the airship. Spider-Man is having none of this, though, and he webs himself up to grab Conine, and also uses his webs to screw up the innards of the robots. Actually, this is kind of weird, I mean, yeah, Spidey isn’t Doom’s main opponent, but they’ve faced each other plenty of times, enough where you’d think Doom would think to web-proof his robots. But, hey, this is a comic about a evil sorcerer-scientist-king trying to kidnap Jeff Conine, so maybe I’m thinking about this too much.

Oh, right… Spider-Man is able to rescue Conine, and we get to see a brief cameo by Robb Nen as he watches them land in a web-cushion. I guarantee those words have never been said before, but that’s basically what happens: 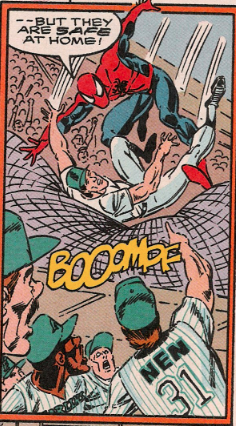 His plot to kidnap Jeff Conine foiled, Doctor Doom faces another problem: Billy the Marlin is screwing up his Doombots using a squirt gun. Much like the thing with Spider-Man’s webbing, I find it highly unlikely that Doom wouldn’t have had his robots ready for something like water. I mean, it’s only, y’know, what covers over 70 percent of the planet. To be fair, this is even pointed out by Billy the Marlin, who wonders how the heck Doom cleans his robots:

Also, I like how Doombots apparently yell out “SQEEK” upon death.

So, anyway, Doctor Doom does not like how a anthropomorphic marlin has helped foil his plans.  So he more-or-less says “If you want things done, you’ve got to do them yourself” and goes after Billy, who shows great courage and goofballery in the face of certain death:

Let us all hope we all face death like this: with jokes in our heads, water-guns shooting at our assailant and a smile on our face. It’s what Billy the Marlin would want, for it is as he spent his final moments before Doctor Doom used his energy gauntlets to turn him into a “fish fricassee”. Rest in peace, Billy… rest in peace.

Oh, who am I kidding, Spider-Man swings in at the last moment, knocks Doom out, makes a self-aware reference to the bad “Doom’s kidnapping scheme strikes out!” pun he spewed while doing so, and then swings away on a web-line as Billy and the Marlins sign autographs. 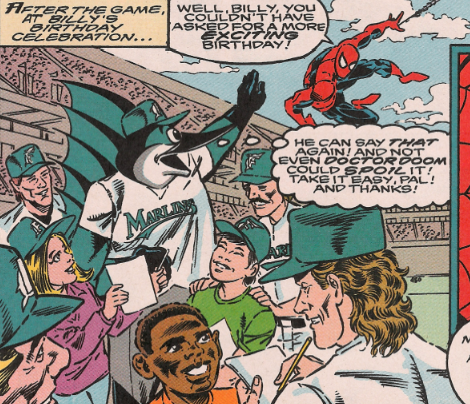 What is he shooting his web at?

And, ultimately, isn’t that all somebody reading this would be looking for?

18. Billy the Marlin (guest-starring Spider-Man) [You are here]