In this, the 25th official installment of “Bizarre Baseball Culture” (“Rockets Rigby” was something of a prologue), I don’t really look at anything new, so much as look at some things that keep popping up in the series. So far, we’ve had 19 comics-related posts (although some of them have been really short, and in other cases have been two-in-one deals), one movie clip, three animated pieces and one prose novel (plus the short story prologue). So, in all of those, what are some things I’ve noticed a lot of? Well… (GO BELOW THE JUMP)

If there is one villain of baseball fiction, it is clearly organized crime. They have appeared about six times, all of them in comics from the 30s or 40s (unless you also count Team Rocket in the Pokemon episode I covered, but they aren’t so much villains as they are comedy relief). By comparison, alien villains have shown up four times (and two of them were the same aliens from the Ultimate Sports Force comics), honest-to-goodness “Supervillains” have also shown up only four times (five times, if you count The Brain), and some stories don’t even have villains at all! Yes, clearly, organized crime had a hold on the imagination of the baseball-writing comic book writer of the 30s and 40s.

There are probably a few reasons for this, which I have mentioned, or hinted at, previously. For one, it’s easy to just create a gangster, and they would have been right in the public mind back in the 30s and 40s, not long after the Great Depression and the “public enemy” eras. It also isn’t surprising that those gangsters would be involved with baseball in these stories- after all, the Black Sox scandal would have only happened about 20 or so years before the stories were written, plus the players wouldn’t quite have been paid enough where it was infeasible that maybe somebody would throw a game.

For another thing, it’s probably because it would make more sense for gangsters to give a care about baseball than random aliens or something like that.

Since the First World War, the similarities (and differences) between throwing a baseball and throwing a hand grenade have been noted. And, so, perhaps it is not surprising that Bizarre Baseball Culture has come across exploding baseballs with some regularity. Well, okay, not that regularly, but way more than you’d think. Baseball bombs have shown up in Fantom of the Fair, Doll Man, The Shield, and probably one or two more that I can’t remember off the top of my head. So, yeah, there is something of a fascination with exploding baseballs.

Not surprisingly, some of the most unintentionally hilarious/awesome moments of Bizarre Baseball Culture come from the appearances of real ballplayers. For example, there is something just inherently neat about Doctor Doom trying to abduct Jeff Conine, as happened in the Billy the Marlin comic. And in the Ultimate Sports Force comics, where the ballplayers are the heroes themselves, it’s even greater. For example, we got to see this image in Shortstop Squad:

Or, in Cosmic Slam, where an army general tells Mark McGwire that he saved baseball, and now he has to save the world:

Truly, though, the king of the comic book appearance is probably Cal Ripken Jr. Maybe it’s because he was my favorite player growing up and as a result I’ve subconsciously sought out comics featuring him, but so far he has been in two comics, was mentioned in another, and is in two more comics that I have in my possession and will one day be on Bizarre Baseball Culture. He’s like the Wolverine of baseball comics. For those of you who don’t get what I mean, I’ll just say that it’s common for Wolverine to appear in comic books that really have nothing to do with him or the X-Men, just because he’s such a popular character. Also, like Wolverine, Cal Ripken Jr. seemed to have possessed an enhanced healing factor during his playing days that allowed for near-instantaneous healing from injuries*.

*This was inspired by a Twitter conversation I had with Michael Clair.

There is one Bizarre Baseball Culture-worthy story that I refuse to ever do. Unless, maybe, I one day write a book (maybe I should Kickstarter it). Even then, though, it’d probably be in the back behind several pages more or less warning people about it and apologizing that I ever gave it the light of day.

It’s a WWII-era Captain Marvel Jr. story in which Freddy Freeman (no relation to Freddie Freeman) hears that the Japanese military is forcing American POWs to play baseball games against them for their freedom… and that the POWs are losing. So, Freddy turns into Captain Marvel Jr, flies over, and saves the day (why he wouldn’t just fly to Tokyo, Berlin and Rome and just round up all the Axis leaders is never explained).

Thing is, it’s ridiculously racist. This is to be expected given the time it was written (it was war, after all, and racist stereotyping and caricaturing of enemies goes back to mankind’s beginnings), and isn’t even the worst thing I’ve ever seen from the era, but it’s not something I ever want to put up on this blog.

That said, there have been quite a few things in Bizarre Baseball Culture that would never be able to be printed in modern times, at least by competent people who would want to remain gainfully employed at whatever entertainment company they worked at. Back then, though, they were A-Okay! They aren’t as bad as that story I just mentioned, but they cause some eyebrow-raising. For example…

There’s the misogyny in “Rockets Rigby” and Action Comics #50:

There’s the spanking of children in Captain Marvel’s story with the Martians (this shot wasn’t posted in the original post):

And, of course, there is smoking. Lots and lots of smoking:

From the aforementioned Captain Marvel story…

From the “Little Wise Guys” story. That’s a teenager being given a cigar.

From the “Dash Dartwell” story.

..and that’s just a sampler.

And, of course, there are also some things that would give the wrong moral message these days, like Dash Dartwell’s entire being basically being based on Performance-Enhancing Devices or Dick Blaze playing through an obvious concussion.

Again, the Captain Marvel Jr. story I’m treating as my personal Song of the South is worse than all of those. Combined.

And, to finish it off, here are the best comics images from Bizarre Baseball Culture, in my opinion: 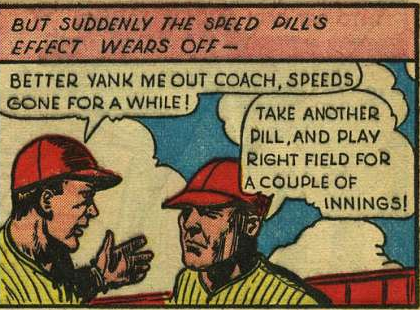 From “The Shield”. Has nothing to do with baseball, but it’s still hilarious. 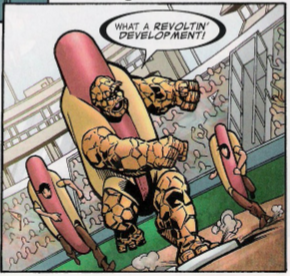 From the first AAA Baseball/Marvel comic.

From that same AAA Baseball/Marvel comic.

The Mole Man crying at the beauty of baseball in the second AAA Baseball/Marvel comic.

From the Billy the Marlin comic. Obviously.

From “Shortstop Squad”. Where what Cal Ripken did that day is a more important news story than a giant monster attack.

So, what type of things will be in Bizarre Baseball Culture over the next 25 posts? Well, I can say that I have five future Bizarre Baseball Culture installments already planned for 2014, although there will of course be more. The ones already planned are set up so that they go up around the time of major movie releases, TV season finales, or birthdays, so you can probably guess what sort of characters will be in them.

I will also be expanding Bizarre Baseball Culture to look at certain ways that baseball has been incorporated into works of fiction, but not in ways big enough to justify entire articles on each work. For example, you might see something on baseball equipment in non-baseball video games, or the favorite baseball teams of fictional characters. So that’s something to look forward too.

So, thanks for coming to the first 25+ installments of Bizarre Baseball Culture! And if you want to go back and look at the old ones, look below.