In 30 Teams, 30 Posts, I write a post about every MLB team in some way in the lead-up to the beginning of the 2015 season. This is the third post of the series- look here for the rest. Today, I look at the one of the great rising stars of the Houston Astros- their mascot, Orbit.

The Astros are going to be something. Sooner than you think, they will have one of those “What The Heck” seasons, bursting onto the scene and into the playoffs like the Rays, Pirates and Royals of past years. They will revive pro baseball on the Gulf Coast of Texas, and teach everyone the true meaning of the unit of measurement known as the Altuve.

But until then, the Astros can at least rest easy knowing that they have one of the rising stars of the MLB Mascot Circuit- Orbit. 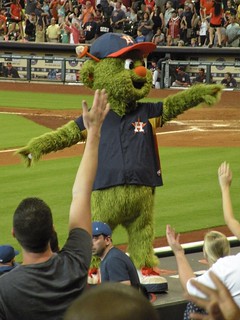 Yes, Orbit, the Alien Muppet… thing. Once the mascot of the Astros from 1990 to 1999, he returned in 2012 by popular demand. And, since then, he has made his return worth it, using puns, slapstick, dancing, and mock-feuds. It is no coincidence that Orbit was brought along with the MLB All-Star Team to Japan for a recent tour, considering how great he was in 2014? No wonder, as our good friend Michael Clair once pointed out, that Astro won the Mascot of the Year Award.

Go below the jump for some thoughts and observations about some of Orbit’s highlights:

One of the great things with Orbit is that he seems, at his core, a fan of baseball in itself, not just the Astros. To be sure, he is the Astros’ mascot, but he is rarely malicious to the Astros’ opponents, and is all for having a little bit of innocent fun, such as the above little act he did with Mike Trout.

Orbit plays every instrument for “Deck The Halls”

For Christmas last year, the Astros had Orbit wish everyone a happy holiday…. by having him singlehandedly play every instrument during a rendition of “Deck The Halls”. Truly, there are few mascots who could show off such musical aptitude. Oh, and he’s also a drum major. Raise your game, Fredbird.

Orbit Appears in an ESPN Commercial

In this day and age, you aren’t truly something in sports until you’ve shown up in a SportsCenter commercial, like Orbit did with James Harden above, where it appears Orbit was playing the Sandra Bullock role in Gravity. I now have a strange want to see that film with Orbit just edited in.

Finally, Orbit deserves kudos for his long-term storytelling abilities, such as when he had a feud with J.P. Arencibia, then of the Rangers. He mocked Arencibia with silly dances and insulting signs, Arencibia posted an image of Orbit wearing a (gasp!) Cowboys jersey. Finally, they sat down for some intervention and ended up hugging it out. Truly, a brilliant piece of mascot storytelling.