(Note: The following contains spoilers for Fallout 4. Click on each picture to make it larger if you are having trouble reading text or seeing something.)

It is October 23, 2077. The world is at war, and fear of nuclear annihilation is high. However, for you, it is just another day in a Boston suburb with your spouse and your young son. And, obviously, your son, Shaun, is a baseball fan in the making, as you can see a small glove and ball that you can comment on: 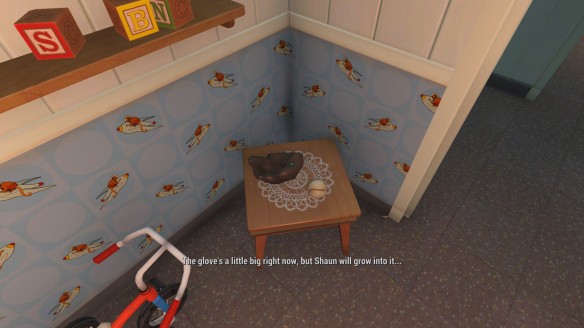 As you receive your coffee and paper from your robotic butler, Codsworth, you hear something in the corner of your living room. On a black-and-white TV, a newsman with the voice of Ron Perlman (who has a role in every Fallout game, usually as a narrator of some kind) updates you on the day’s events and weather before going to sports: 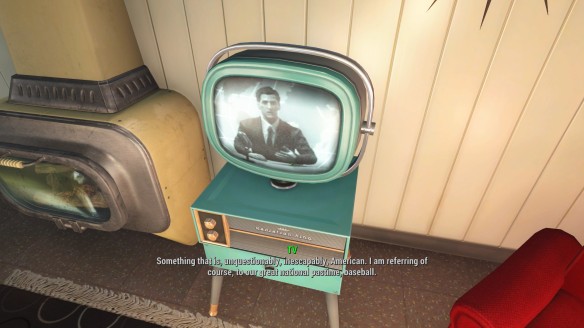 Yes, it’s World Series time in Boston, as the Red Sox are looking to win their first title in over a century and a half!

You are then interrupted by a salesman selling a spot in a underground fallout shelter, called a Vault. After that’s done, you go check on your son and talk to your wife. She thinks maybe everyone should go for a walk in the park this afternoon. Pffft, you say:

Of course, you do end up missing the World Series. After this conversation, you get news that atomic missiles are incoming. You rush to the nearest vault. Stuff happens, and you wake up 210 years later with your wife gone and your son missing.

(More below the jump!)

And so begins Fallout 4, by Bethesda Game Studios. Well, at least, that’s how it begins for me. You see, in Fallout there are many paths you can take: you can plays a man or a woman, you can choose how you want to respond to dialogue, you can ignore sounds in the background or walk up close to focus on them, and you can choose who (if anyone) you later travel with in Post-Apocalyptic times.

Still, with that in mind, in my play-through so far, there have been plenty of baseball references, including one big one that every player of the game would have to go to, no matter what.

That big one is Diamond City: 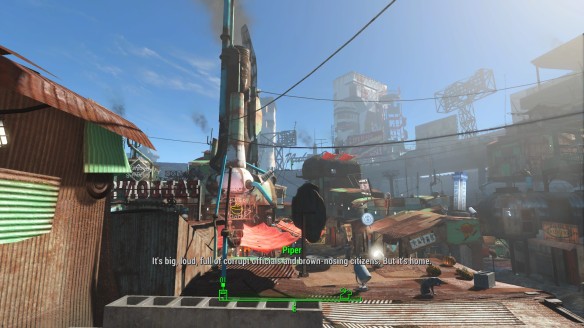 It’s a concept so cool that I found somebody selling t-shirts for it already. 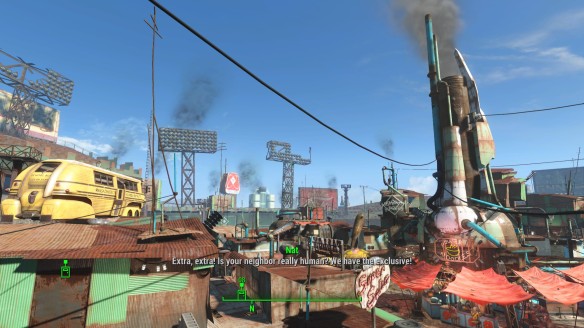 So, let’s look a bit at Diamond City…

The Road to the Green Jewel:

Before you even get to Diamond City. You hear about it, referred to as the “Green Jewel”. You are told to go there, that it’s a place where you might be able to find some help and supplies. You recognize what it is before you even enter the city itself, it’s light-stands jutting out of the now-ancient stadium:

You begin to see signs: “Baseball- 176 Years of Boston Tradition”, still hanging there despite the fact it is 210 years since that number was out of date.

You see signs directing you to the entrance, with a diamond logo upon it:

Finally, you arrive at the gate. And there in front of the entrance is a statue of a left-handed baseball player, standing at bat: 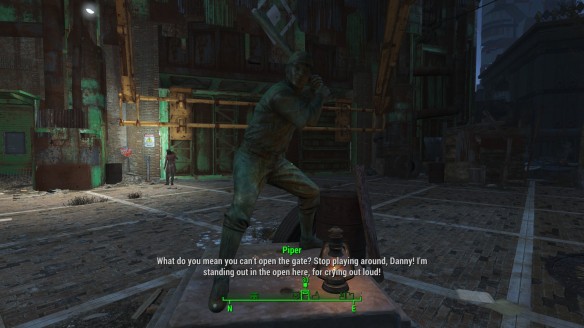 Not far from that is a small sign that declares, simply:

Finally, though, you are able to actually get into the stadium/city itself thanks to the help of a reporter named Piper Wright, who describes Diamond City like this:

“A big wall, some power, working plumbing, and some security goons are what makes Diamond City the big monster it is.”

Ah, yes, a monster. Perhaps even a green one.

Once Piper is able to trick security into opening the gate (her journalism has not made her popular with the city’s government), you are met by the Mayor, who lectures you and Piper… while standing in front of old Beverage stands:

And he continues on, mentioning the Wall as their “sacred protector”. More on that in a bit:

And then, FINALLY, you can enter Diamond City proper.

Diamond City is perhaps the biggest settlement in Fallout 4, where you can find almost anything, meet two of your “companions” (Piper and the robot detective Nick Valentine), and are introduced to various quests. And, while it doesn’t go over-the-top on the baseball references (it’s been 210 years since the last game at Fenway, after all), there are plenty of things you can find, some of them quite good.

First off, throughout the city you can find Diamond City’s security forces, who can be seen here during a loading screen:

As you can see, the Diamond City security guards are clad in catcher’s pads, and often carry baseball bats.

They aren’t the only ones in Diamond City wearing baseball gear, though. The local barber, for example, is clad in a old, stitched-up team jacket:

And then there is Moe Cronin (named, no doubt, for Hall of Famer Joe Cronin), who runs the local bat-stand:

Yes, Moe Cronin here, more than any other character, is the big baseball presence of Diamond City, selling “Swatters” to people while dressed in an old jersey. And he intends to keep the baseball heritage of Fenway alive: 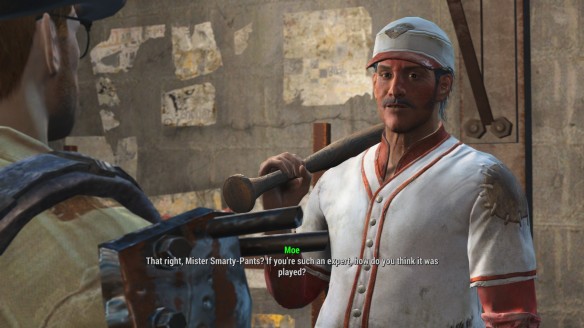 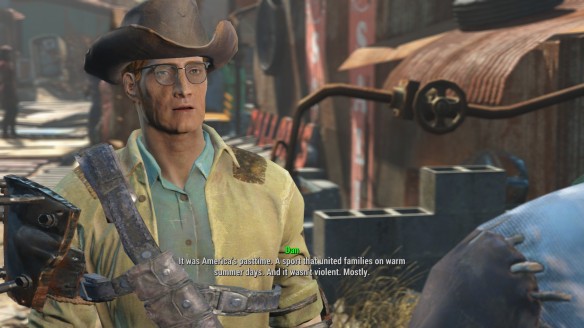 There are other possible answers you can give him, such as listing out the actual rules.

To this, Moe says that he likes his version better. Y’know, the one with the beating people to death with baseball bats. Still, Moe does give you a quest to find and retrieve certain artifacts from the estate of “Quitting is for Punks” Westing:

More on that later, because there are still other things left in Diamond City.

The bases (such as home plate here) are still around, and you can run around them for a “Home Run” achievement:

The actual stands and the press box of Fenway are now where the hoighty-toighty one-percenters of post-apocalyptic Fenway live, with the mayor having his office in the press box. The people in the stands are assholes:

The first-base-side dugout is now the “Dugout Inn”, a bar:

The other dugout is now used for by Diamond City Security: 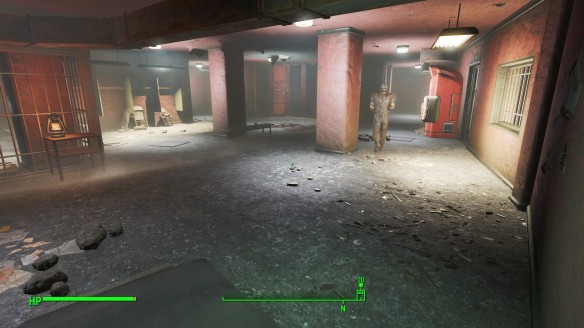 And that includes a POST-NUCLEAR BULLPEN CART: 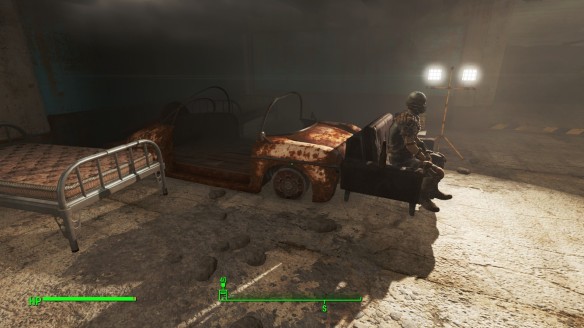 If only it had a hat!

In the outfield, you can find a bullpen of sorts… in that it’s a pen that holds cattle (not shown):

History for the Fallout universe’s Red Sox is, of course, different. Not only was the Curse of the Bambino still going strong when the world ended in 2077, but the retired numbers were also different: 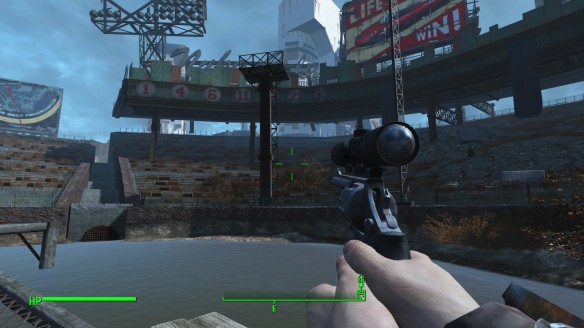 The one that is partially obscured is 13.

And, finally for this section, a very nice touch by the team at Bethesda, as they have placed the famous red seat that marks Ted Williams’ 502-foot HR in the stands of Diamond City: 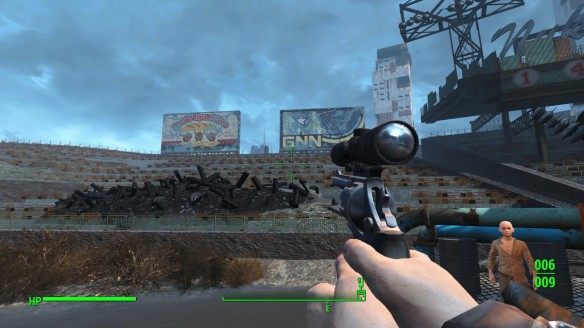 Just to the left of this reticle.

In the post-apocalyptic Diamond City, the Green Monster is a deity, a “sacred protector”, as the mayor said. At one point you see the Mayor give a rousing speech and ends it like so:

Yes, God Bless the Wall. Which, it should be noted, looks like it did before seats were added, fitting with the Fallout series’ eternal 1950s aesthetic. Well, it’s not a exact 1950s post-apocalyptic replica: for example, you can see the places in the scoreboard where the AL East standings would be, suggesting that in the Fallout universe divisions and so on were introduced.

But enough about that, let’s discuss more about the religion that revolves around Green Monster. It’s a ingrained part of the culture of Diamond City, to the point where people complain to Piper’s newspaper if they think it’s not given enough credit: 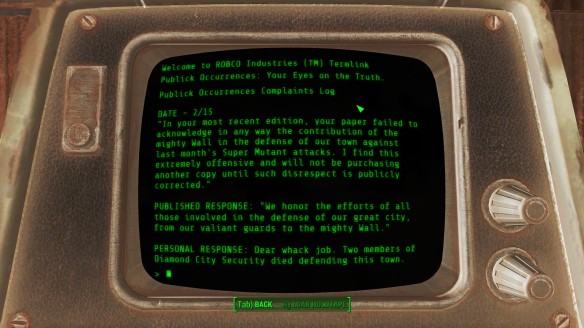 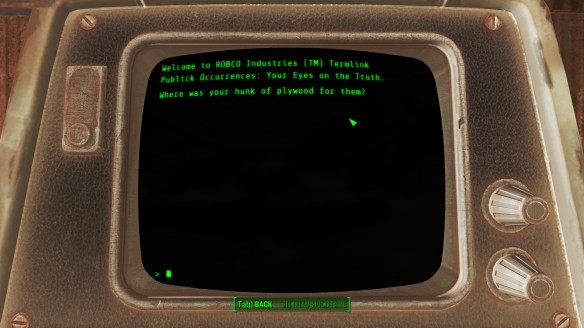 And, like all religions, the Wall has a priest. In this case, it’s someone named Abbot (a Abbott and Costello reference? Maybe. Thanks to Jackson for pointing this out.):

Abbot’s main job, it seems, is to paint the wall. Not exactly the Papacy, but it’ll do. However, there is the problem that he is running out of paint, and the nearest post-apocalyptic hardware store is infested with angry gun-toting raiders. And you have to go clear out the place and grab the paint.

So, to make it clear, in this game you have to go fight a hardware store’s worth of angry Mad Max rejects in order to get paint to cover the Green Monster. And you’re doing this for basically the equivalent of 200 bucks, at most. Oh, and you might look a bit like this while you do it: 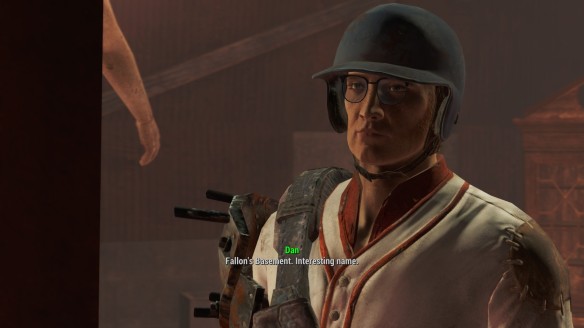 In other words, this is basically the greatest game ever.

Now, remember that quest that Moe Cronin gave you? Well, to complete that, you go to Coach Westing’s estate, fight mirelurks (giant crab things), and grab the baseball, card and mitt. And then you go back and are told Moe Cronin’s…. violent interpretations of them: 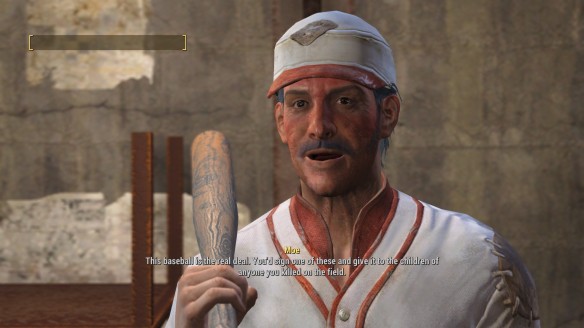 I don’t know why they have hitting stats for a pitcher…. 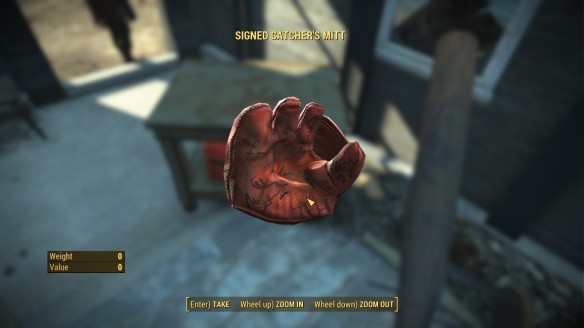 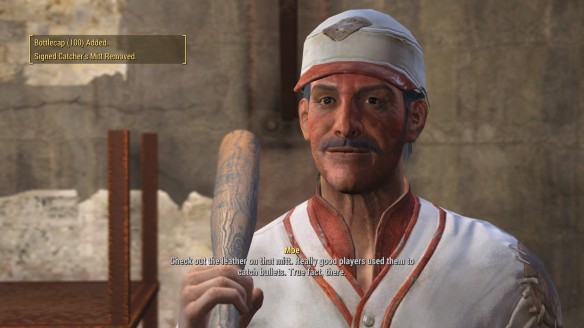 In addition, Cronin sells the “Rockville Slugger”, a reference to the city near where Bethesda Game Studios is located:

Oh, and if you look at him long enough, eventually he calls his shot: 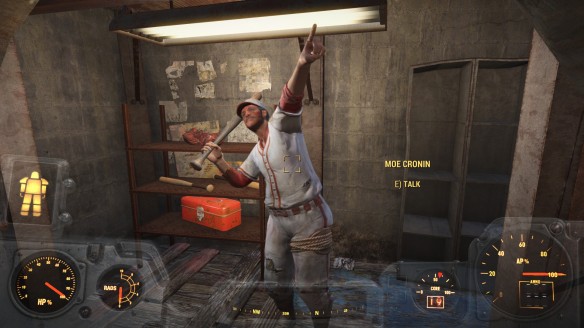 There is one more baseball treasure to be found. In the town of Jamaica Plains, you hear about a fabled treasure. After going through many obstacles, you get to the “treasure”…. and find it’s just a bunch of useless time-capsule. Stuff, with one exception:

Yes, a baseball bat used in the 2076 World Series! 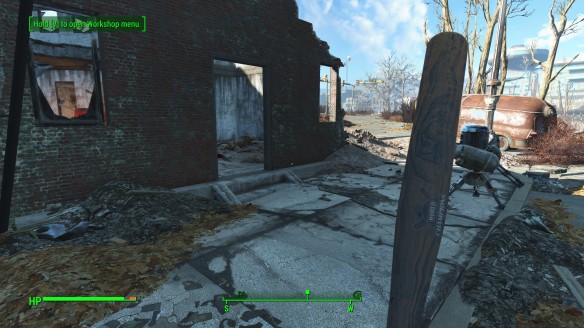 They don’t tell us who won the 2076 World Series, but it’s cool, and when you use it against a enemy you have a chance of hitting them into the air like a home run.

The Last Sports Story Ever Written:

In the headquarters of the late Boston Bugle, you can read the story from the 2077 World Series, as Buster Connolly got way ahead of himself with hype about how the Red Sox were clearly going to win their first World Series since 1918: 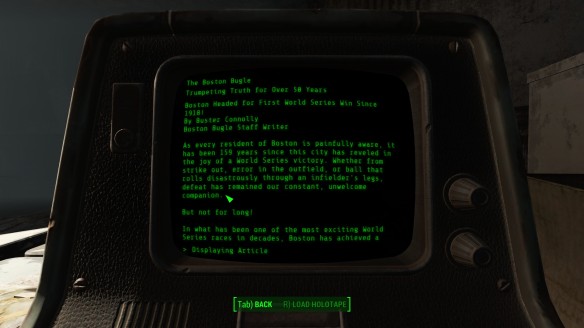 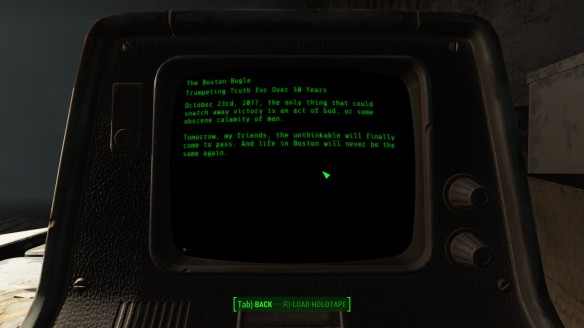 Whoops, guess he tempted fate just a little much there!

There are, likely, more baseball references in Fallout 4, and I have reached out to Bethesda to try and talk to any of the people in charge of designing Diamond City for the game (not surprisingly, I haven’t gotten a response yet), so this may be updated sometime in the future. But, for now, that’s the end of this installment of Bizarre Baseball Culture.