As you no doubt have found out by now, Phil Hughes has signed with the Minnesota Twins. On one hand, you likely thought this was a crazy and reckless move by the Twins, throwing 24 million dollars at a pitcher who has been wildly inconsistent and who was 4-14 last year with an abominable 5.19 ERA. At least Ricky Nolasco, the other big signing for the Twins in their attempt to make their rotation better, was good last season, after all.

But, get this: this could actually end up being a good move. Maybe.

For one, keep in mind the type of pitcher Hughes is. He’s a fly ball pitcher. Last year, 46.5% of balls hit off Hughes ended up as fly balls, according to FanGraphs. That’s a lot, and it is especially dangerous in stadiums like the new Yankee Stadium, which is a hitters park that at times seems to turn routine fly balls into unexpected home runs. Compare that to Target Field, however, where the opposite seems to happen: if I had a quarter for every time it looked like Joe Mauer had just hit one over the wall only for it to fall short (either turning into a double or a fly-out, depending on the outfielder and the part of the stadium he hit it to), I’d have many quarters.

It’s entirely possible that, with more of his games in a more spacious stadium, Hughes will be able to cut down on the gopher-balls and deflate his ERA quite a bit. Although it’s admittedly a small sample size (and he was facing Twins hitters), Hughes’ regular-season numbers in his three games and 21.1 innings at Target Field seem to back this assessment up. He is a career 2.53 ERA pitcher in those three games, and gave up just one HR (That’s one HR every 21.1 innings, compared to one HR every 5.015 innings in the current Yankee Stadium). If Hughes can replicate anything close to that performance when he pitches in Minnesota wearing a Twins’ jersey, he could prove to be a reliable two or three starter for the Twins, and certainly an improvement over the revolving door they had last season.

And, what’s more, there is also the fact that at times, Phil Hughes’ roller-coaster career has climbed very high. Back in 2010, for example, he was an All-Star who went 18-8 (more on that next sentence). As recently as 2012, he won 16 games, although, as Brian Kenny would tell you, that more-or-less tells you nothing (and, what’s more, he also lost 13 games). Could Hughes be heading for another upward trend? Well, that has yet to be seen, and the answer may well make the Twins look like geniuses (or fools).

Today, I went up to Frontier Field to see the Rochester Red Wings unveil their new logo. They’d had their previous logo since the late ’90s, and I was curious to see what they’d do. Would they go retro and go fully to the ball-and-wings logo that they’d introduced as an alternate the past few years? Would it be something completely different, perhaps something with talons?

Not bad. Keeps the old logo’s main theme while changing it up a bit, with other logos for home, road and alternate caps. The alternate cap logo “R”, in particular, serves as a retro touch that brings to mind Specs Toporcer and Rip Collins, while also serving to make the wordmark look classy.

END_OF_DOCUMENT_TOKEN_TO_BE_REPLACED

When announcing lineups, the Rochester Red Wings often play “Love Rollercoaster”. It fits this season, as the AAA Twins affiliate seemed to be on one that had highs, lows, loops, 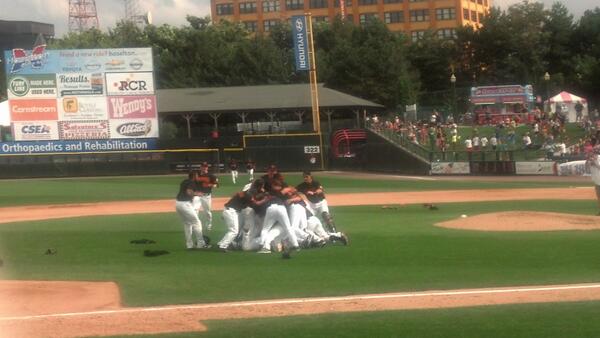 corkscrews and no shortage of screaming and yelling. And now, after a blowout 13-3 victory on the final day of the season and a stunning 1-0 extra-inning defeat by the Norfolk Tides (AAA Orioles), the Wings now have made the playoffs for the first time since 2006 by virtue of holding a tie-breaker against Norfolk.

It was by no means a sure thing. Then again, there was very little “sure” about this season. The Wings started 2-11, they were in last place as late as May 29, they were in first later in the year, only to lose both that lead and also seemingly the wild card in a late skid after their best player (Chris Colabello) and best pitcher (Andrew Albers) were called up… and then, finally, at the end, they were able to pick themselves up and get to the playoffs, with a little luck.

END_OF_DOCUMENT_TOKEN_TO_BE_REPLACED

Do you wish you could have a bag made out of the old Metrodome roof? Well, you can now!

Another summary/picture article on the Rochester Red Wings is up at Twinkie Town.

I’ve got another game report on the Rochester Red Wings up on Twinkie Town’s Fanposts page.

Johan Santana will almost certainly be placed on the DL and is expected to miss the entirety of the 2013 season after a re-tear in the anterior capsule of his left shoulder was detected in an MRI. Surgery is a true possibility, and the last time he had such surgery (in 2010), he was not able to return to MLB pitching until 2012. Now 34, it is quite possible he has thrown his final pitch in the big leagues.

So now, let us remember back during Johan Santana’s glory days with the Minnesota Twins by looking at this picture:

Photo by Keith Allison, used under a Creative Commons license.