It’s time for yet another Baseball Continuum CONTINUUCAST! This time with Twins’ prospect expert, Seth Stohs! Hit play above, download by right-clicking here, follow the RSS feed here or follow on iTunes here or Stitcher here (if the latest episode isn’t up yet, it will be shortly).

It’s a Minor League Baseball installment of the Continuucast!

First, Dan talks to Twins’ prospect expert Seth Stohs about the Minnesota, the Rochester Red Wings, Minnesota’s farm system in general, and the appeal of Minor League Baseball. Please note that I had some technical difficulties during the conversation, but I have used software to clean it up and make it as good-sounding as I can. Apologies!

Then, Dan does another belated “30 Teams, 30 Posts” by talking about how Trevor Story’s amazing first week with the Rockies in some ways is proof of just how fun and unexpected the minor leagues are, since they can provide great surprises even from non-top prospects like Story!

Come back next week when Dan will welcome the “Evil Empire” onto the Continuucast and speak to Yankees Blogger Stacey Gotsulias!

Excerpt of “Pennant Fever” from the Major League soundtrack

All sound and music used is either public domain or is a short snippet that falls under fair use.

Kevin Johnson is the current mayor of Sacramento, and was also a three-time All-Star for the Phoenix Suns. But he also briefly had a baseball career of two games in 1986 in the Athletics organization:

And now you know!

Apologies for being late, but here are five things we learned from the 2014 Rochester Red Wings season:

3. As always, the fate of a Minor League Team is in large part outside of it’s control

Make no mistake, the purpose of AAA baseball teams is, and always will be, to provide a place for future MLB players to get ready for The Show. Winning is of only secondary importance, and, with rare exception, no AAA team will go the season with all of their key pieces untouched. What’s more, there are still the other hazards that haunt every baseball club: injuries, slumps, players that just don’t work out or underperform.

This year’s Red Wings were a perfect example of that. The Red Wings played 144 games this season. Only six position players were in at least 100 of them, only four were in at least 120 of them, and only two (Eric Farris, who’s “get to know your Wings” scoreboard segment was by far the best, and Aussie infielder James Beresford) were in at least 130 of them. Danny Santana, who many thought would be in Rochester for a good chunk of the season, ended up only playing 24 games, while Darin Mastroianni was lost to first the Majors and then to the Blue Jays through waivers after just four games. Chris Parmelee, the leading power threat through the first month of the season, was also gone early. The vaunted opening-day rotation of Alex Meyer, Trevor May, Yohan Pino, Logan Darnell and Kris Johnson saw all but Meyer spend at least some time in Minnesota, and the loss of May and Pino down the stretch especially hurt. If Rochester had all five of them all season, I see almost no way that they miss the playoffs, but, again, those are the breaks that come with being a AAA franchise.

And, of course, there were injuries, both in the majors (which led to certain players getting called up to replace the injured Twins) and down in the minors. The loss of Meyer to injury early in the third-to-last game of the season may well have doomed the Red Wings, as it forced them to burn Mark Hamburger, who was expected to pitch a must-win game against Pawtuckett the next day. Instead, the Red Wings had to have Jose Berrios, a 20-year-old (albeit one of the top prospects in the system) pitch that game, where he was beaten up on in a loss that ended the Wings’ playoff chances.

Health problems below AAA also put a wrench in the Wings’ season. At the start of the year, it was considered possible that top prospects Miguel Sano and (although more of a longshot) Byron Buxton could join by the end of the year. Sano got hurt and missed the whole season, and Buxton got a concussion in his first game in AA (although by that point it was clear he was probably not going to end up in Rochester by the end of the year).

Speaking of prospects, I think it’s becoming increasingly unlikely that Rochester will ever see Kennys Vargas, who has gone .314 in 140 AB for the Twins since getting the call-up from AA. Prospects jumping from AA to MLB is less frequent in Minnesota’s system than it is in some others, but it does happen: Joe Mauer would never have played in Rochester if not for a injury so early in his rookie season in MLB, for example.

4. Of course, the above thing also can go the other way.

After the first month of the season, I don’t think anybody expected that Chris Colabello would be back in Rochester. He’d done great early in the year, after all, even winning AL Player of the Week at one point. Then he crashed back to earth and ended up spending more games in Rochester this season (61) than he would in Minneapolis (59). He did not receive a call-up at the end of the year and it’s almost certain that his time with Minnesota- and maybe even affiliated baseball in general- is at an end. But what must have been a horrible disappointment for Colabello was good news for the Red Wings, as he ended up leading the team in HRs. In his two seasons with the Red Wings, Colabello ended up batting .319 in 551 ABs, with 34 HRs and 114 RBIs. His OPS of .966 was spectacular. He will be missed, but hopefully he gets another shot at a permanent place in the Majors.

Similarly, Chris Herrmann was originally with the Twins to start the year, but ended up playing sizable time in Rochester, where he became one of the Wings’ best hitters. He’s now in Minnesota again as a September call-up.

The same sort of thing will no doubt happen next year, just as it happens every year.

5. The Mario-Coin Sound Is An Excellent Sound Effect For Scoring A Run

This season, when the Red Wings scored a run, the sound from Super Mario Brothers when you got a coin would play. They aren’t the only team that does it- I believe the Cleveland Indians do the same, and the Twins use the 1-Up Sound from SMB. It’s great, funny, and is also a good reminder that ultimately baseball is a game.

In fact, it even inspired me to try my hand at some artwork: 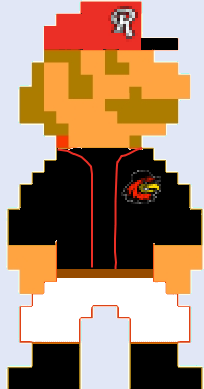 That’s Mario in a Rochester Red Wings jersey. I’m not entirely sure why I made it, but I find it funny and I’m glad I made it. Let’s just hope they don’t change the sound effect next year, otherwise this will just be ridiculous.

So, the 2014 season is over in Rochester. It’s far too early to guess what the 2015 season may bring: Will Gene Glynn return as manager? Will some players be lost to free agency or by making the jump to the big leagues? Will next year by the year that Sano and/or Buxton make the jump to AAA?

Only time will tell.

Another summary/picture article on the Rochester Red Wings is up at Twinkie Town.

Quick, look at this video and tell me what’s wrong:

If you guessed “The runner going from first to second didn’t go all the way to second, thus was able to be forced out causing the game to go into extra-innings,” then you are correct! Santiago Nessy started celebrating instead of making sure the force play was gone, and his semi-reenactment of Fred Merkle‘s boner play cost his team the game!

The short-season minor leagues have gotten started or are about to do so, so here are some to look out for… below the jump.

END_OF_DOCUMENT_TOKEN_TO_BE_REPLACED

Want to see all of the “Famous For Something Else” features so far? Go through the links below: