The question of who the greatest video game athlete of all time is a hard one. Many go with Bo Jackson, with good reason. Still others (such as the Cespedes BBQ duo) wisely go with the Secret Weapon himself, Pablo Sanchez. But for sheer variety, none can defeat Mario, the most versatile athlete in video game history, who, by coincidence, celebrates the 30th anniversary of the release of Super Mario Brothers today!

And today, to honor National Video Games Day, which I just found out exists like ten minutes ago on Twitter, I’m running down every single sport Mario has ever played.

END_OF_DOCUMENT_TOKEN_TO_BE_REPLACED

Last time, we made the Seattle Mariners be full of Mario and Donkey Kong characters. This week, though, we have a exhibition series between the MARIOners (minus any Mariners) and… the Backyard Baseball kids (shown here to be on the Dodgers, because reasons)! Yes, Mario vs. Pablo Sanchez. At stake: The title of GREATEST VIDEO GAME BASEBALL TEAM OF ALL TIME.

Or something like that. Go below the jump, and be sure to check the previous post to see how I created the Mario characters- I used an almost-identical process for the Backyard Kids:

END_OF_DOCUMENT_TOKEN_TO_BE_REPLACED

But what if the Mariners had had Nintendo’s own playing for them? 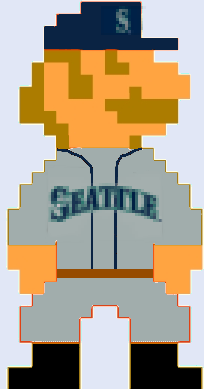 (AND GO BELOW THE JUMP TO SEE THE ARTICLE, AND CLICK PICTURES TO MAKE THEM BIGGER)

END_OF_DOCUMENT_TOKEN_TO_BE_REPLACED

On Saturday at 1:30 PM Eastern, a new BREAKING OOTP will go up.

What is it about this week?

Well, put simply, it is a simulation of a world where the Nintendo-owned Seattle Mariners were able to use Nintendo characters in their lineup, each given attributes derived from the Mario baseball games.

While it doesn’t break OOTP, it certainly is fun. So make sure to read it when it goes up!

The question of who the greatest video game athlete of all time is a hard one. Many go with Bo Jackson, with good reason. Still others (such as the Cespedes BBQ duo) wisely go with the Secret Weapon himself, Pablo Sanchez. But for sheer variety, none can defeat Mario, the most versatile athlete in video game history, who, by coincidence, celebrates the 30th anniversary of the release of Super Mario Brothers today!

And today, to honor National Video Games Day, which I just found out exists like ten minutes ago on Twitter, I’m running down every single sport Mario has ever played.

END_OF_DOCUMENT_TOKEN_TO_BE_REPLACED

Going on a completely-unrelated tangent here, here are my thoughts on the demo for Super Smash Brothers for the Nintendo 3DS. For those of you who have no idea what I’m talking about, Super Smash Brothers is a video game series in which the most famous video game characters in Nintendo’s pantheon (Mario, PIkachu, etc.) and occasionally characters from other companies (Sonic the Hedgehog, Pac-Man, etc.) beat the snot out of each other for fun and glory.

First off, it works, for the most part. I was worried about how the SSB franchise would translate into the handheld realm after being on home consoles up until now, but so far it seems pretty good. The controls take a bit to get used to and it certainly isn’t perfect, but it works well enough and the full version of the game will allow users to customize the controls.

Also, the screen is fine, even if you have a smaller 3DS. I have had few problems following the action in the demo, even with the smaller-screened 3DS I have. I still might want to eventually get the larger 3DS when it’s “new” incarnation comes out either late this year or sometime next year, but that’s more because of the fact it’ll have better battery life and be slightly more powerful.

The new characters playable in the demo (Mega Man and the Animal Crossing Villager) are a nice change of pace from the usual. The two new additions that are in the demo are Mega Man‘s titular character and the Villager from the Animal Crossing series. Both are a neat change from the usual. Mega Man, for example, lacks a physical “a-button” attack, instead merely shooting weak laser-pellets out of his handcannon, while the Villager has a bunch of unusual special attacks. One has him pocketing projectiles and then later throwing them back, another is launching a rocket that he can also ride, and still another has him plant a tree, water it, and then cut it down so that it falls on an opponent’s head. An interesting character to play as, and it’ll be interesting to see how long it takes to truly get a hang of him.

However, I feel like the 3DS version will just be an appetizer.  Oh, sure, it’ll be fun to play, but I think that once the Wii U version comes around, most people will focus on that, only playing the 3DS version when they are stuck waiting at an airport or otherwise on the go. The reason for this is because Smash has always been a home console game, played with the speakers blaring out some Nintendo classic hit as you see the action on a large screen, and with hands firmly around a true controller- in fact, Nintendo is even going to be releasing an adapter so that the old controllers still will be able to work. The fact that the Wii U version will be the first Smash in true HD is also a big plus that it has over the 3DS version.

More off-topic stuff on Super Smash Brothers as it is released.

RBI Baseball was one of the great baseball video games of all time. A few years back, somebody used the game to recreate the final inning of Game 6 of the 1986 World Series, complete with Vin Scully commentary.