Note: I was provided a early review copy of the game.

First, let’s cut to the chase: Out of the Park Baseball is back in it’s 2017-titled installment, and it has maintained it’s strengths, improved in it’s weaker areas, licenses from both MLB and the MLBPA, and more data and options than ever. If you are wondering if it’s worth getting now over previous versions, the answer is: yes, yes it is. And if you are wondering if it’s a good OOTP to start with, I say: yes, yes it is. It’s not perfect, but nothing is.

Now, this review mostly focuses on what’s new. What I said in my three previous reviews still, for the most part, holds up.

But, man, what is added is substantial. Previous years may have added a bit here and there, or introduced features that, while good in theory, were somewhat unfinished in practice. And while that “never finished” feeling still is in effect in some areas of OOTP 17, this year’s installment is one of the most polished leap forwards in the series.

Take, for example, the 3D view. In previous years, the 3D view was sometimes more trouble than it was worth, and sometimes would wonk up the system. But now…

As you can see, you can now see little peg-people representing the players. And they will move to represent the plays that happen. For example, if a batter walks, you’ll see their little peg move down to first, and if there’s a ball hit to left, you’ll see a little ball go to left and see the left-fielder chase it down. It’s not exactly high-technology, but it gets the point across. Even better, it doesn’t seem to affect how smoothly the game runs, although of course that will depend a bit on your computer. I love this, it adds a bit of “as it’s happening” flare to games that wasn’t there before, and turns what to me was something of a boondoggle way of viewing the field into something I’ll probably use regularly.

Also in that picture, you can see a bit of another great new feature: historical exhibition play! I covered this a bit during one of my “30 Teams, 30 Posts” installments, but I’ll cover it again a bit here. Basically, you can have any MLB team in history play any other MLB team in history. You could do this before, but it was very time-intensive. Now, it’s as simple as selecting a team and choosing your wanted setting and/or rosters. It’s both a good way to see interesting match-ups and also a good introduction to OOTP for people who haven’t played it before and don’t want to jump straight into the longer modes.

That doesn’t mean that the longer modes haven’t received updates. They have. In addition to the usual upgrading of rosters to their current state, is also the addition of historical minor leagues! Want to see what might have happened if Michael Jordan had continued his baseball career? You can! 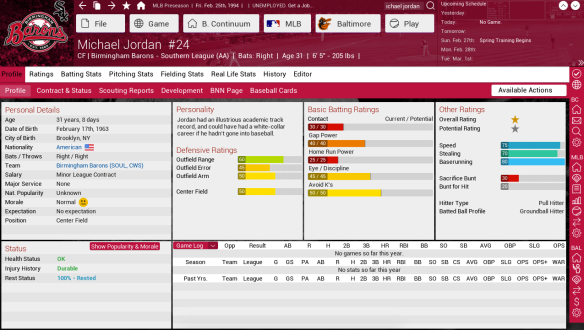 While those are the big changes, there are also some small changes that, together, add a lot. For example, there are now computer-written recaps for games you play and/or simulate. Is it something that completely changes the game? No. But they are nice to have.

Really, if I have any issues with this year’s installment, it’s how the Steam version of it only supports the workshop for mods. In previous years, you could use a in-game system to download new logos and rosters from the internet easily, this time it only can connect to the Steam Workshop. While OOTP Developments has said that most if not all mods will eventually come to the Workshop, right now only two are there, meaning to get some mods you have to go poking around the internet for the files and install them manually. Annoying, but not a deal-breaker by any means. Hopefully it improves soon, though, as OOTP and Steam’s Workshop would seem to be made for each other.

But, really, other than that and maybe the occasional bug that will always rear up in a game of this scale and complexity, Out of the Park Baseball 2017 is quite possibly the greatest baseball simulator of all time. At least… until next year, when those mad geniuses will probably top it again!

In 30 Teams, 30 Posts, I write a post (of varying amounts of seriousness) about every MLB team in some way in the lead-up to the beginning of the 2016 season. Earlier installments can be found here. Today, the Marlins.

I am lucky enough to have on my hard drive a reviewer’s copy of Out Of The Park 17. While obviously the review will not be out for a few more days, I decided that for today’s “30 Teams, 30 Posts” I would use one of OOTP’s newest features to answer a question:

What was the greatest Marlins team of all time? Was it the 1997 Florida Marlins helmed by Jim Leyland or was it Jack McKeon’s 2003 Marlins?

Using the “Historical Exhibition” feature of OOTP 17, I’m going to find out… after the jump:

END_OF_DOCUMENT_TOKEN_TO_BE_REPLACED

Out Of The Park Baseball 2017 is coming next month. And I’ve got some thoughts on what I’m most looking forward to:

Minor League teams from 1919 to 2015 will be available for the first time. This is going to be really neat. I can presumably do a tournament of the best affiliation-era Red Wings teams now, and others probably will be able to do things like having an “independent” Pacific Coast League during the 40s and early 50s.

In past OOTP, to have the 1927 Yankees play the 1975 Reds required making your own league that happened have both of them. This time, though, there will be a option that means you can just do that. Here’s hoping OOTP Developments also allows minor league teams, international teams, and fictional teams (like the MARIOners) to be used in this.

In the past, you had to download the faces from modders to appear in the game’s “FaceGen” system. But due to a license with the MLBPA, that no longer is going to be an issue.

The 3D engine of OOTP has always been better in theory than it has in practice, but judging by the images shown on the preview page, it’s going to be making a significant improvement. Something much needed.

More realistic career arcs, auto-created game stories, a better interface… while they won’t be as “sexy” as the better 3D, Minor Leagues, or exhibitions, these are all going to make the product a better game as a whole.