Sports have many problems. There are performance enhancing drugs, exploitative agents, a culture that honors people and asks their opinions for no other reason than that they are strong, and stupid adults who ruin everything.

And in Marvel Adventures Spider-Man #34, we get a hard-hitting glimpse at how this affects high school baseball in a Marvel Universe. BECAUSE SOMEBODY HAD TO TELL US! 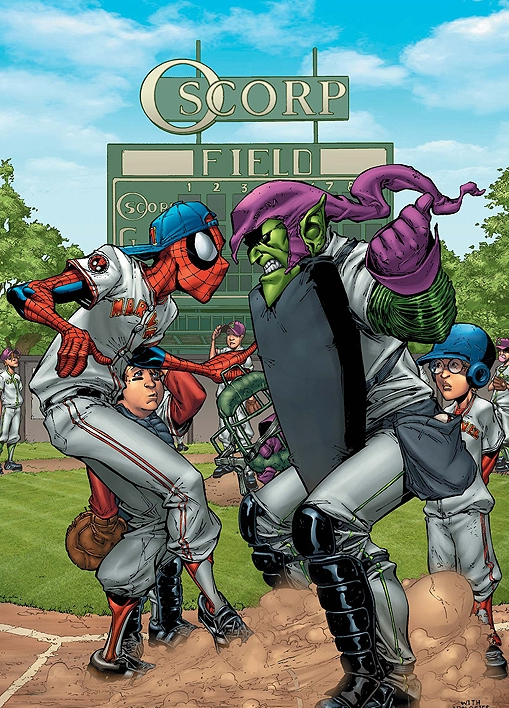 Published in 2007, this issue was part of the Marvel Adventures/Marvel Age imprint, a set of ongoing series that were meant for all-ages of readers. To make it more readable for younger folks, these series cut down on more complicated backstories, featured characters (like Spider-Man) that most kids would have been familiar with from TV or movies, featured younger versions of some characters (this Spider-Man is still in High School, for example), didn’t have as much violence, and eliminated bad language and sexual innuendo.

But… that doesn’t stop it from having steroid accusations, a angry father, sports agents, and other fun stuff! It also has a baseball uniform with a Koala Bear on it, which is cool.

Go below the jump for more!

END_OF_DOCUMENT_TOKEN_TO_BE_REPLACED

One of the things you realize when you think about superhero fiction too hard is that a lot of the criminals could probably become rich using their technology or skills in more legal pursuits. For example, find the right quiz show for the Riddler, and he’s rolling in dough. Captain Cold or Mister Freeze could easily make a mint if they applied their freeze-weapons toward something like refrigeration. Heck, even the people who write the comics know this, and in the 1980s they turned Lex Luthor from a supergenius with lots of high-tech inventions into a corrupt supergenius billionaire superexecutive who had made his money from his many high-tech inventions.

Which leads me to Bullseye. Bullseye’s a Daredevil villain, created by Marv Wolfman and John Romita Sr. in the 1976 and perfected by Frank Miller in his run on Daredevil’s comic book. Bullseye’s entire shtick is that he basically has perfect killer accuracy with basically everything, even harmless stuff like playing cards. He’s arguably Daredevil’s second-greatest foe (after the Kingpin), and is directly or indirectly responsible for the death of at least two of Daredevil’s girlfriends (only one of whom got better).

But, still, that shtick with the accuracy, wouldn’t you think he could make a great pitcher?

Well, there was a 2-part miniseries at the turn of this decade that basically grabbed a hold of that idea and ran with it… Bullseye: Perfect Game.

It’s a surprisingly good short look at obsession and perfection, with some nice easter eggs for fans of baseball and of comics and a great ending that I’m sort of bummed out I’ll spoil in my summary…. BELOW THE JUMP:

END_OF_DOCUMENT_TOKEN_TO_BE_REPLACED

As I write this, America is in the grasp of the Every Simpsons Ever Marathon on FXX. To be more exact, we’re currently on Day 10 of 12. Maybe Day 11 of 12. Depends on when this goes up (probably Day 11). But, don’t let FXX lie to you: They don’t have every Simpsons ever. No, they are lacking the original Tracey Ullman Show shorts, the Butterfingers commercials, at least one other short, at least two music videos, and, of course, countless comics.

The Simpsons has long been a staple of Bongo Comics, the publishing group co-founded by Matt Groening to produce comics based on his TV shows, and this time on Bizarre Baseball Culture, I look at Bongo Comics’ Simpsons Comics #120, which tells the tale of Homer, Bart, and a record-setting baseball.

END_OF_DOCUMENT_TOKEN_TO_BE_REPLACED

There is a special type of baseball culture that I haven’t really covered yet… the baseball biography comic. Whether authorized or unauthorized, the baseball bio-comic is it’s own small subgenre of weird.

Take Baseball Superstars Comics‘ bio-comic on Cal Ripken, Jr. from 1992. A black-and-white comic from the now long-defunct “Revolutionary Comics” and seventh in a series of baseball bio-comics, it’s like a fever-dream of a look into the life and times of the Orioles great up through the 1991 season. The art is disturbing, the writing wooden, and the facts sometimes feel wrong.

That said, it’s not all bad. It’s got a so-bad-it’s-good quality at times, and any comic that features two pages devoted to the longest game ever is going to get my attention.

So, on his 54th birthday, here’s a look at the Baseball Superstars comic on Cal Ripken Jr…. after the jump:

END_OF_DOCUMENT_TOKEN_TO_BE_REPLACED

Nothing is going to beat Mr. Go. It just can’t be done. But, I’ll give it my best shot by bringing to you a comic from 1977 in which DC’s Captain Marvel and his talking anthropomorphic tiger mascot Tawky Tawny join the Detroit Tigers to defeat a team of alien All-Stars.

It’ll have to do.

So, here’s Shazam! number 32, from late 1977. I covered most of Captain Marvel’s complicated history (and why most people think he’s called Shazam) way back in May 2012, so if you want to know that, go there. However, an update is in order: DC has more or less given up calling him “Captain Marvel” and now is referring to him as “Shazam”. This is partly because everyone who doesn’t read comic books calls him that anyway, and also partly because Marvel has recently given the title of “Captain Marvel” to a character named Carol Danvers (who appeared as “Ms. Marvel” back in one of the AAA baseball comics) to great success, to the point where it’s thought they might make a movie starring her, likely with the name “Captain Marvel”.

(Incidentally, the Hero-Formerly-Known-As-Captain-Marvel-And-Now-Officially-Known-As-Shazam will reportedly be played by The Rock in a future movie.)

(Also, all characters, images and panels from the comic are trademarked and copyrighted to their owners and rights holders, all pictures here are are being used under fair use doctrine and are meant merely to support and enhance the opinions and facts stated in this post.)

But enough Captain Marvel background, go below the jump for an analysis/review of this comic!

END_OF_DOCUMENT_TOKEN_TO_BE_REPLACED

Earlier this week, the season finale of the second year of Arrow aired. And, to belatedly honor that, here’s a look at the time that Green Arrow and the Elongated Man fought a guy dressed as a calculator during the World Series.

JUMP for the rest:

END_OF_DOCUMENT_TOKEN_TO_BE_REPLACED

Robinson Cano is now a Mariner. I did NOT see that coming. And they paid a ridiculous 240 million dollars for him, which is absurd, especially given the long length of the deal and the fact Cano is already in his thirties.

However, that, along with the fact that the Mariners are apparently not going in hard to get David Price (amongst others), means there is perhaps no better time than now to be remembering how back in 2002 the Mariners saved humanity from a grand Sasquatch Invasion, which is easily one of the ten worst types of invasions to deal with. And they did it in TWO issues! Yeah, some teams would stop with just one issue, but the Mariners released TWO in 2002. That is true devotion to giving the fans what they…. want? And, what’s more, They were available outside of the stadium too, available at local McDonald’s! That way, you wouldn’t even have had to go to the park to get your hands on these comics!

Both comics were written by David B. Schwartz, who’s Twitter account calls him a “entertainment lawyer by day, comic book writer by night.” He’s recently been doing things for independent comic companies like Aspen, where he most recently wrote a title called Idolized, if my research is correct. Since he’s a lawyer, I’m going to be extra-careful not to say anything that might cause him to sue me. Thankfully, he does a pretty good job with these comics, given the circumstances that surround comics like this.

Doing the art for the first issue- and the covers of both issues- was Brian Kong. Kong has done a ton of stuff over the years, from comics to cards to recently illustrating a children’s book about how baseball teams got their names. In part two, the art was done by Dennis Calero, a prolific artist who co-created Cowboys and Aliens, which was later very-loosely adapted into a movie, as well as work with DC and Marvel. Like with Schwartz, they do okay given the circumstances.

Go below the jump and let’s get started on the stories themselves: