This week, we are going with a simple idea: what if there was an Arena Baseball? The smallest possible field, with a fast astroturf, 42-foot-high walls to knock balls off of and easily lob high-reaching homers over. Something like this: 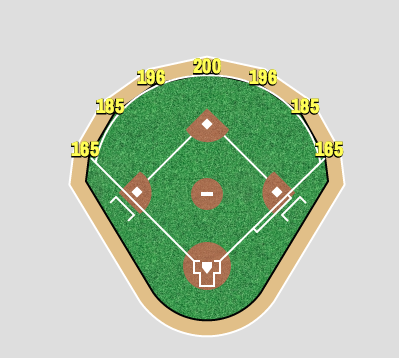 And, what’s more, I’m telling the computer to approach this as if this is the 2015 MLB season, so they’ll use the same tendencies that MLB teams would.

This could get weird. Go below the jump to see how weird it gets (and click any pictures to make them larger):

END_OF_DOCUMENT_TOKEN_TO_BE_REPLACED

In 30 Teams, 30 Posts, I write a post about every MLB team in some way in the lead-up to the beginning of the 2015 season. Previous installments can be found here. Today, we honor the Marlins the best way possible: Giancarlo Stanton dingers.

There are many ways to look at the Miami Marlins. You could look at a team on the rise, of Ichiro’s final days, or Jose Fernandez’s return from injury.

Or, you could just look at lots of Giancarlo Stanton home runs.

Let’s do that (after the jump):

END_OF_DOCUMENT_TOKEN_TO_BE_REPLACED

Well, that stunk. Oh, sure, the 2014 Home Run Derby had it’s moments, but in my mind at least, it was the worst Derby since the Modern Derby Era began when ESPN started showing it live instead of on tape delay.

And I think the problem was format. Oh, sure, there were other things wrong: the rain was totally outside of everyone’s control, of course, and Target Field was never going to be the place to give us one of those Derbies that remind us why they hold the event in the first place (such as the 1999 one in Fenway, or Abreu’s performance in Pittsburgh or Hamilton’s in New York). But, mostly, it was the format.

Oh, sure, the new format of having brackets leading up to a showdown between the best HR hitter of each lead seemed good in theory, but in practice, it stunk. Mainly because it forgot the main reason we watch the Derby: to see lots and lots of dingers, especially those from BP legends like Giancarlo Stanton, who can (and did) send balls into parts of the stadium you never even knew existed.

With the bracket format, however, Stanton and Jose Bautista sat around a lot, and by the time they got back from their bye, they were rusty, and the now-truncated 7 outs (instead of 10) didn’t really give them much time to warm up. The result? Last night saw us see a lot of Todd Frazier (who isn’t bad, but is far, far from a Giancarlo Stanton, HR-wise) and very little Stanton and Bautista. Only the fact Yoennis Cespedes was still going throughout the whole thing kept it from being a total snoozefest.

So, here’s my idea on how they can fix the HR Derby:

Having “Captains” pick teams has been more good than bad, so that can stay, but for sake of time the number of players overall should go down. So, instead of picking four teammates, as they did this season, they will only pick three, as they did in previous years. However, a “Wild Card” spot would be added, to be decided upon by the powers that be. It could be a prospect who has impressed (like Joey Gallo), it could be a recently-retired slugger who probably still has some pop in his bat (imagine if Jim Thome, for example, had been swinging last night), or it could be for a MLB player who the captains just couldn’t find a spot for.

Each batter would get 10 outs, but, to make the Derby shorter and less of a drag, there would only be two rounds: the first round of 9 (which would also act as a “AL vs. NL” round, with the winning team getting a bunch of dough for the captain’s charity), then a second, championship round of three.

And, hey, if they NEED to pad it out a little… why not have a third round of the top two who survive the round of three?