Another busy week of WBC News, so here’s a bit of a catch-up:

A roundup of some additional WBC news from the past week or so that I missed in yesterday’s post:

In the week since our last update, more World Baseball Classic News has come out. Here’s some of it (I may get some stragglers tomorrow):

Team USA gets a manager

It’s been announced that Mark DeRosa will be the skipper for Team USA in the 2023 World Baseball Classic. It’s a bit of a surprise pick, as I and others assumed it’d be a retired manager like Mike Scioscia. However, instead USA Baseball is going young. While DeRosa has never managed professionally, he’s been thrown about in the past as a potential future candidate and is well-liked around the game. Plus, his day job as an analyst and host at MLB Network means he’s well-acquainted with most of the MLB players in the tournament. DeRosa played for Team USA in the 2009 WBC and had a long career in the majors as a super-utility man.

Shohei Ohtani didn’t play in the last WBC due to injury, but if he wants to he can in this one. The Angels have granted him permission to take part. Technically, he could have played anyway as WBC rules only allow teams to deny permission under certain circumstances like if they were on the injured list, but players- especially pitchers- generally will take team requests to heart and so if the Angels didn’t want him to play it’s likely he wouldn’t.

Altuve in for Venezuela, Lopez to manage

Jose Altuve has confirmed he’s planning to play for Venezuela in 2023. Altuve previously played in the WBC in 2017. Managing Altuve will be someone familiar to him: Houston first-base coach Omar Lopez.

The Polar Bear himself, Pete Alonso, has confirmed he’s in for Team USA. One of the best sluggers in the lead, the Mets first-baseman joins Mike Trout, Bryce Harper, Nolan Arenado, J.T. Realmuto, Trevor Story, and Paul Goldschmidt as played who have signed up for Team USA. Notably, there still have yet to be any pitchers to announce their interest, but at least as far as position players the USA is looking good so far for defending its WBC title.

Look for more WBC updates in the coming days!

Some big names have committed to Team USA in the past few days: Bryce Harper says he’s in, as does catcher J.T. Realmuto. Over at first base, Paul Goldschmidt has also committed to the team.

Meanwhile, an article on Minnesota Twins players planning to take part in the tournament revealed that Carlos Correa and Jose Miranda are planning to play for Puerto Rico, while Gio Urshela and Sandy Leon (who is actually Venezuelan but has family ties to Colombia) will suit up for Colombia.

Fernando Tatis Jr. is not expected to be eligible to play in the WBC due to his PED suspension.

I haven’t yet done a good search of the international media over the past few days, so come back tomorrow or Monday for another update.

Still catching up on some of the WBC news from the past few days….

It’s time for a WBC Update!

First off, as you probably saw, Israel won it’s qualifying pool and is headed to the main WBC tournament.

Adam Jones says he will play for Team USA again if asked. Also in Team USA news, they are said to be looking at Brian Dozier of the Twins as a possible member.

The Seattle Times ran an article on Mariners who may be playing in the WBC. Robinson Cano is all-in for the Dominican, of course, and so is Nelson Cruz. Dae-Ho Lee says he’ll play for Korea is he’s asked, and Felix Hernandez wants to play for Venezuela again (he wasn’t able to in 2013 due to contract stuff). Reliever Edwin Diaz wants to play for his native Puerto Rico. As for Americans, Kyle Seager said he’d love to play, although he admits the depth of American baseball means he could end up staying in Spring Training or sitting on the bench.

While not “news”, per se, you should still read Lindsey Adler’s awesome article on Pakistani baseball.

Until next time, this has been Dan Glickman with your WBC update.

Like the Mexicali pool, this is a pool that will pit Latin America and Europe. However, in some ways the only European team will be France, as Spain weighs heavily on imported talent. This should be the most competitive WBC qualifier bracket so far, with only France being a team that I can say has no chance.

Go below the jump for more:

END_OF_DOCUMENT_TOKEN_TO_BE_REPLACED

Finally, the rosters for the Panama and Mexicali qualifiers of the WBC have been unveiled. I’ll go deeper when I do the previews for the tournaments, but a quick rundown:

Finally one last other piece of news:

There is some exhibition action, as Germany split a two-game series with the Tijuana Toros, France beat Seminole State College, and the Czechs lost to a Brewers’ minor league squad.

Team Germany will play exhibition games against three different Mexican League teams, as well as a team from the Brewers organization.

“Samurai Japan” has teamed up with the Anime series Mr. Osomatsu to help raise awareness for the team, both in the WBC and in other tournaments (where they generally don’t draw as well).

George Springer, who’s mother is from Puerto Rico, has apparently been recruited by Carlos Correa to play for Team Puerto Rico in the main tournament next year.

News on who will and will not be in the WBC qualifiers:

First off, the Mexican League will be allowing their players to play for Team Mexico.

Jake Sanchez of the Athletics organization will play for Mexico

Jose Quinanta of the White Sox is in for Colombia.

Sadly for Colombia, Julio Teheran will not be pitching for them.

The official rosters apparently come out tomorrow, so that’s something to keep an eye out for.

Hello, everybody. Here’s some WBC news from the last few weeks, in no particular order:

The Mexican League and the Mexican Baseball Federation continue to squabble, making it unlikely that any Mexican leaguers will partake in the qualifying. However, I’ve also seen some tweets that indicate that this has been solved and that Mexican League players will take part. I’ll let you know when I have it cleared up.

Yovani Gallardo had said that he was going to play for the Mexican team in the qualifiers, but that was before he signed with the Orioles, so that may change. Another iffy Mexican pitcher is Julio Urias, a top prospect for the Dodgers, who has said he will skip the qualifiers if it looks like he has a good chance of making the team.

A preliminary roster for Team Nicaragua (thanks to Max Wildstein) was released. This roster has since changed (you can find how it has in some of the other items) and would be pared down to 28 anyway, but it gives you a good idea of some of the players who will be on the team: 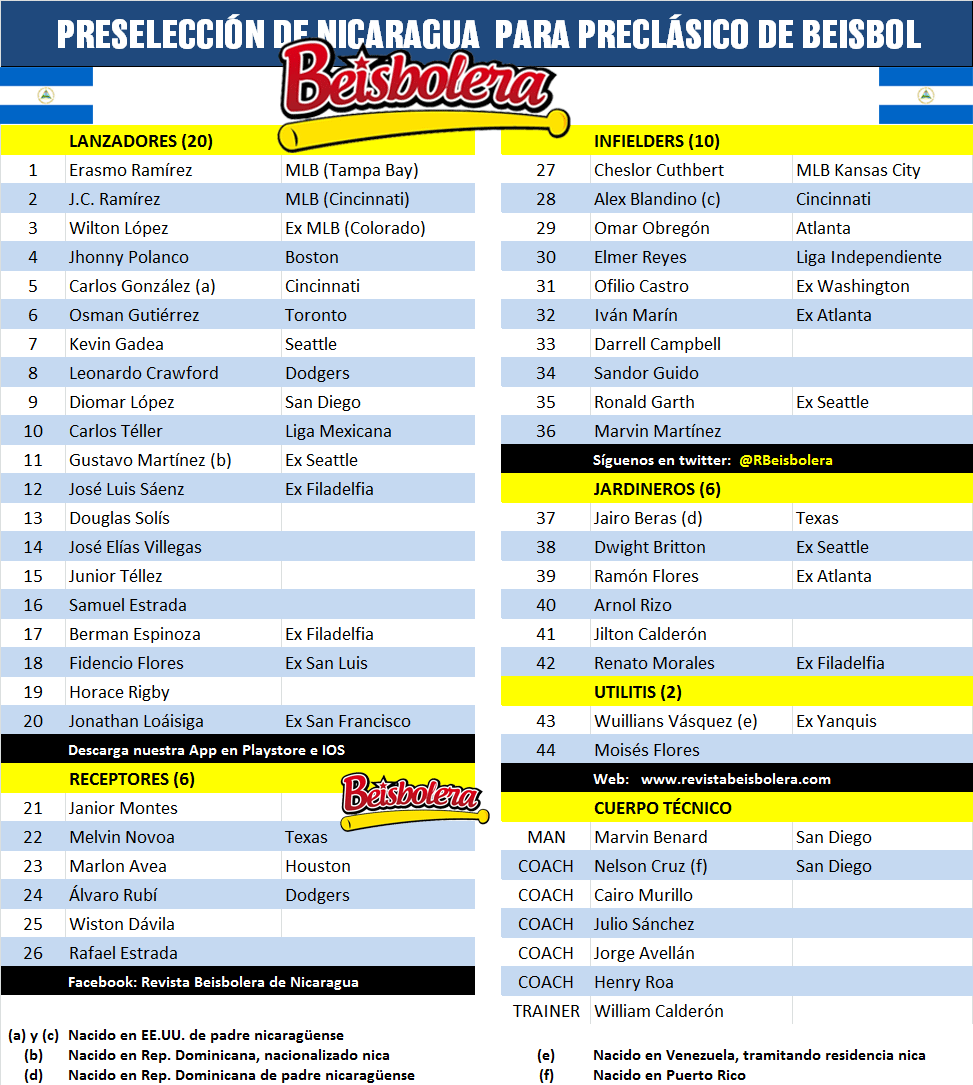 Omar Vizquel will be the manager of Team Venezuela next year. Bobby Abreu and Magglio Ordonez were candidates for the batting coach position, and it appears that Magglio won the job. Other tweets have confirmed that Eduardo Perez will be a bench coach, Roberto Espinoza will be the pitching coach, and Henry Blanco will be a bullpen coach. Also in Venezuelan news: Gregor Blanco wants to play for his country in the 2017 WBC.

The Spanish have announced their coaching staff for the upcoming qualifiers, led by Tigers Latin American director Manny Crespo.

Mike Griffin will manage the Czech team, while Trot Nixon (!) will be hitting coach.

Speaking of the Czechs, it appears that they will have more players with North American experience than last time thanks to players of Czech ancestry, such as John Straka, Brett Tomko, Mike Cervenak, and Alex Sogard. However, apparently Eric Sogard has been denied, unless if he hasn’t. I find it much less likely that he will take part, though. The Czechs will be playing exhibitions in Arizona ahead of the qualifiers.

Donovan Solano, now in the Yankees organization, is still deciding whether he will play for Colombia in the qualifiers or if he will stay in camp. However, he is listed in a list of MLB-affiliated players who are “confirmed” for Colombia:

Dilson Herrera of the Mets, as said above, will definitely suit up for Team Colombia. Others listed in the above tweet (if it doesn’t show up): William Cuevas, Carlos Mario Diaz, Kevin Escorcia, Tayron Guerrero, Gregory Nappo, Jesus Posso, Mauricio Ramos, Reynaldo Rodriguez, Tito Polo, Harold Ramirez, and Carlos Vidal. Apparently a complete list for Colombia will be out on Saturday.

Carlos Ruiz has been authorized to play for Team Panama, which is huge, even if he isn’t as good as he used to be.

Dean Kremer, a pitcher for UNLV who’s parents are from Israel and who lives there during summers when he isn’t playing, hopes to play for Team Israel in the WBC qualifiers.

Elmer Reyes of the Braves organization will play for Nicaragua. Wuillian Vasquez, a Venezuelan-born player who has lived and played in Nicaragua for several years while also playing in Europe, is also eligible.

The German National team will have a exhibition game against the Tijuana Toros on March 9.

Quick run-down of other players who have been confirmed in/out for certain qualifying teams (from various Twitter sources found by @MaxWildstein):

Randall Delgado is out for Panama but Andy Otero is in.

Cheslor Cuthbert is out for Nicaragua, as is Wilton Lopez, who has an injury.

Luis Guillorme is in for Spain.

Now, this was a lot of news. Maybe too much. And I probably missed some. And for that reason, I’m glad to say that starting now, WBC Updates will be FAR more frequent, occurring AT LEAST once a week, but at times happening on a daily or every-other-daily basis.