Tomorrow (Friday), there will be another Olympic preview.

On Saturday, there will be a post on the Blue Jays in Buffalo.

Well, due to some things getting in the way, I won’t have a Bizarre Baseball Culture up by tomorrow. Instead, it’ll be later in the week.

However, I am willing to give you a preview: It is a comic about Spider-Man and Ghost Rider (both conveniently in Toronto) helping a Blue Jays fan who has been hit by a drunk driver.

I’m hoping it’ll be up by the end of the week.

So, I know I didn’t end up putting my “no explanations given” predictions last Friday, but I swear I am not falling back into one of my long hiatuses. In fact, I have a few things in the works.

These are just things I have in the works- there is nothing stopping me from just writing something spur of the moment, as I did with the Mike Trout and trout post.

So, yeah… stuff is in the works.

Coming this week on the Baseball Continuum:

So, I’ll admit, I’ve been slacking lately. But, that’s about to change. Here’s a schedule for this coming week:

WEDNESDAY: A look at the 1919 World Series and whether the White Sox REALLY were the big favorites people say.

And, of course, there will be the MVP posts.

Hello everybody, work continues on the 2016 Baseball Continuum Blogathon for Charity benefiting Roswell Park Cancer Institute’s Roswell Park Alliance Foundation, and we are now less than two weeks from the event, and about a week away from the GoFundMe page going up. Several of the guests have already sent in their pieces, and I’ve gotten some good possible giveaways for the Blogathon raffle as well.

So, two weeks out, I thought I’d give you a bit of a preview of some what you’ll be seeing from me in the blogathon:

Yes, the 50th installment of perhaps the Baseball Continuum‘s most famous (as in, some people may have actually heard of it, maybe) feature. And it’s a doozy, as I’ll be looking at DC Super-Stars #10, aka THE BASEBALL GAME BETWEEN DC COMICS’ HEROES AND VILLAINS: 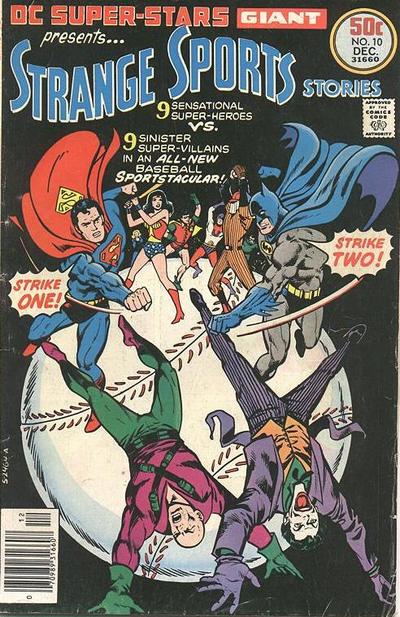 Now, this has been done before elsewhere, but it is such an iconic piece of the sub-sub-genre that is Superhero Baseball that it is the clear and obvious choice to be the fiftieth installment of Bizarre Baseball Culture. Get excited.

Yes, Breaking OOTP will be returning as well, as I will create a world where home runs should be in very, very, very short supply, and then I will watch what happens.

From 8 AM to 11 AM on January 29, every post (with the exception of one post to let people know what happened in the very early morning) will be about international baseball in some way, shape, or form, culminating in the first part of International Baseball Culture at 11 AM.

The latest look at the history of the AAA Rochester Red Wings through their yearly programs will happen that night, with a look at the 1990 program. So if you ever wanted to see what David Segui looked like in 1990, this will be your chance.

Diving deep into the Sporting News archives available to SABR members, I’ll reveal the first time that the “Bible of Baseball” referred to certain players, stadiums, and concepts. What will I be pulling up the first references to this time? I’m not saying, as it would spoil the surprise.

A Proposal to Hollywood to create an American version of Mr. Go

Exactly what it says.

And, of course, more. Those are just some of the things you will see and hopefully read!

As the postseason slowly starts to wind down, here’s a preview of what can be expected in the coming weeks:

So keep an eye out!

Later this week on the Baseball Continuum…

So… keep an eye out!

Here’s the upcoming schedule for both this coming week and some things I have scheduled further ahead:

Monday (March 30): Wisdom and Links at Hall of Very Good, Part 2 of the International Baseball Competition simulation, possibly a “30 Teams, 30 Posts” on the Reds

Wednesday (April 1): “Famous For Something Else”, possibly OOTP 2016 review

Thursday (April 2): “30 Teams, 30 Posts” (either the Padres or Cubs, depending on other circumstances)

Friday (April 3): Part 3 of the International Baseball Competition simulation, “30 Teams, 30 Posts” (either the Cubs or Twins)

Depends on other factors: A new Continuucast

Thank you for coming to the Baseball Continuum.

In this coming week, we’ll have more “30 Teams, 30 Posts”, as well as a “Famous For Something Else” and maybe, finally, a new Continuucast.