The biggest World Baseball Classic news of the day is undoubtedly that Mike Trout has confirmed that he is going to be playing for Team USA in next year’s WBC. He announced it during media day at the All-Star Game (where he is in attendance, even if he isn’t playing due to a back spasm), and Team USA GM Tony Reagins (who is the man who drafted Trout for the Angels) confirmed that Trout will be the team’s Captain and also that he was the first player he called once he got the GM job. Trout hasn’t played in any previous World Baseball Classics for various reasons, so him taking part this time is a big get for Team USA and the event in general.

He’s not the only star in Los Angeles in the WBC news, however, as Freddie Freeman says he’s 100% in for Team Canada. For those that don’t know, Freeman’s parents are from Canada and he has played for Canada in the past in tribute to his mother, who died of cancer when he was just ten years old.

The Dominican Republic now has a General Manager: Nelson Cruz. Yes, that Nelson Cruz, the currently-active DH for the Washington Nationals. The league and the MLBPA had to give permission for him to take the job.

In qualifier news, Bruce Bochy has been named the skipper for Team France. Born in France while his father was stationed there, the three-time World Series-winning manager was going to manage France in the WBC qualifiers in 2020 until coronavirus put a stop to the tournament.

Ian Kinsler, the manager of Team Israel, has confirmed that Joc Pederson will play for the Israeli team next spring.

Rafael Devers has reportedly said that he’s in for Team Dominican if they give him a call.

A Twitter account dedicated to Puerto Rican baseball is reporting that former Red Neftali Soto is ready to play for Team PR in next year’s tournament. Soto has spent the last few years tearing it up in Japan, including winning HR titles in the Central League in 2018 and 2019.

That’s it for today. However, it’s possible more news will break during the All-Star Media Day, so don’t be surprised if you see another WBC update on Tuesday!

Yesterday in my World Baseball Classic update, I mentioned that there had been some WBC news over the past few weeks that I had neglected to share. Consider this a catch-up post on those things.

I’ll have more WBC news as it becomes available and as I find it.

Due to my trip and other responsibilities, I’ve been slacking on WBC updates. So, here is one.

The Pools for the 2017 WBC have been revealed:

The biggest piece of WBC news in the past few weeks is probably the reveal of the actual pools and locations for the tournament. They are:

Pool E (Tokyo Dome): Top two of Pool A and Pool B

Semi-Finals and Finals are in Dodger Stadium in Los Angeles.

Rosters for the Brooklyn Qualifier have been revealed:

Late in August, the rosters for the final qualifying pool were revealed. Baseball America has a good rundown of them, and I’ll go more in-depth on them when I do my preview of the group later in the month. But my early impressions say that Brazil and Israel will be the main teams to beat in the pool, although the UK could surprise.

Kim In-Sik, the manager for Team Korea, is pessimistic about the team’s chances due to a lack of pitching, especially right-handers. He hopes to get Seung-Hwan Oh, but problems with a gambling situation in Macau that led to his suspension from KBO and NPB (it’s complicated and I’m not entirely sure if I fully understand it, but it has to do with rules in Korea and Japan that frown upon gambling even if it’s in a place where it’s legal) make that less than a slam-dunk. On the position player side, Dae-Ho Lee and Byung-Ho Park have been supportive, although Park’s injury makes it unlikely he will take part. Among the KBO players Kim is looking at is Jae-Kuk Ryu, who had some time in the majors from 2006 to 2008. Another article suggests that Hyun-Soo Kim of the Orioles is a certainty to be on the team, but that other MLB players besides him and Dae-Ho Lee are iffy due to the fact they all have had injury problems throughout the year.

Ervin Santana is eager to represent the Dominican at the next WBC, and hopes that Miguel Sano can join him. However, based on conversations that Sano has had with Latin American scouting sources for the Twins, it’s possible he’ll be the odd man and might be better served staying with the Twins, since the DR likely will have players like Adrian Beltre and Edwin Encarnacion filling the roles that Sano would likely would be most fit for.

Noah Syndergaard is likely to receive an invitation from Team USA, although it’s unknown if he would accept.

21-year-old Tyler O’Neill, named the Mariners’ best Minor League player this season by the Seattle Times, is a candidate for Team Canada.

Ken Rosenthal speculates that Clayton Kershaw and A.J. Ellis may have a reunion on Team USA next spring. However, he notes that there are plenty of “ifs” connected to that, especially related to Kershaw’s health and whether Ellis would even be considered for Team USA given America’s depth at the position.

Russell Martin has said he intends to play for Canada if he is healthy. John Axford is also excited to participate.

Omar Vizquel will be scouting the Venezuelan League to keep an eye on people who are on Team Venezuela’s shortlist.

The Blue Jays will play exhibition games in Montreal next year.

Looking at how newspapers from around the world are covering baseball, thanks to the Newseum’s front pages page:

Apologies for the very small post and the lack of any posts yesterday, I’ve been feeling a bit under the weather.

USA. Canada. Mexico. Italy. Those are the four teams in the D Pool of the World Baseball Classic.

Go below the jump for the preview:

END_OF_DOCUMENT_TOKEN_TO_BE_REPLACED

Canada has released the first 23 players who are officially on their provisional roster, here’s a photo of the roster that they released on Twitter: 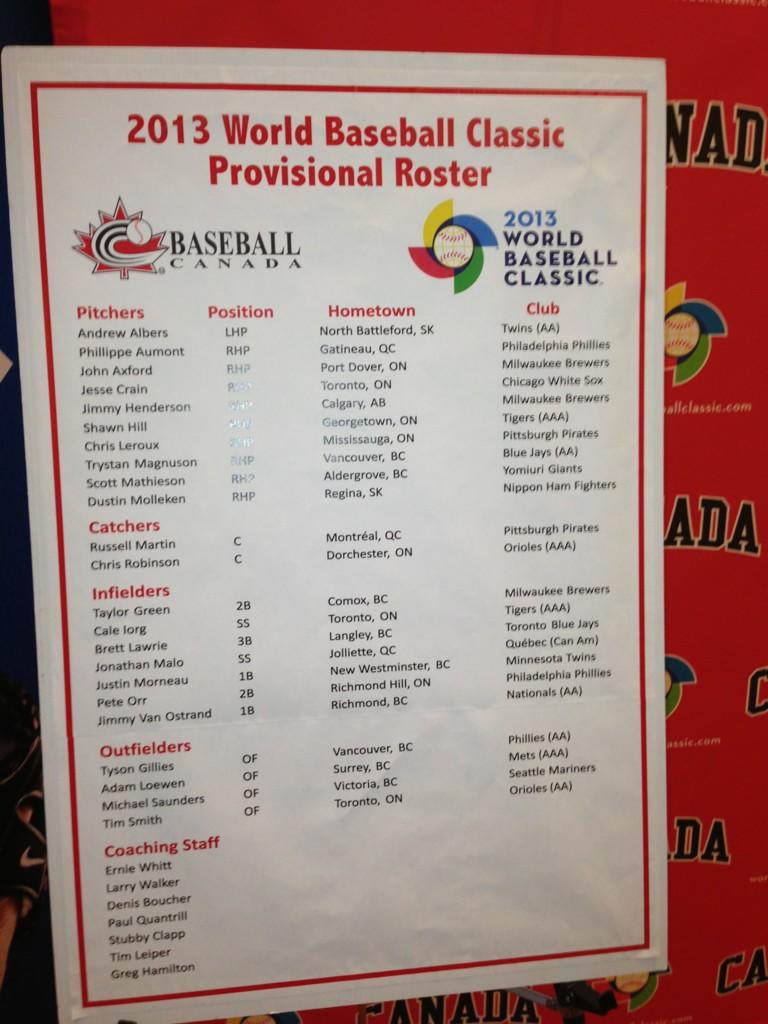 Now, a few notes on this roster:

Joey Votto is still expected to take part, he just needs to get some insurance paperwork done before it’s official:

Joey Votto expected to play for Canadabut needs to work through some insurance issues. Dempster, who just signed with Red Sox, less clear

Ryan Dempster, as mentioned above, is less clear. He hasn’t pitched in past WBCs for certain reasons but it had been hinted at that he might this time (although to the best of my knowledge he himself hadn’t). While he is not on the roster as of now, he could still possibly be put on it later, as Team Canada has only released 23 of the 28 player names. However, Dempster will be heading into his first season with the Red Sox, which makes it unlikely that he will for two reasons:

2) The Red Sox, after the grand Daisuke Matsuzaka debacle of 2009 (when he, according to some sources, hid an injury so that he could continue pitching for Team Japan), are probably the most gunshy team this side of the Yankees when it comes to the WBC, so are probably going to do everything that they are allowed to do (a club cannot unilaterally bar a player from the WBC unless they have an injury) to keep him from playing.
Anyway, continue coming to The Baseball Continuum for more WBC news in the coming days.

As I have previously mentioned, the World Baseball Classic’s qualifying rounds are about to start. I have, of course, done extensive projections for many of the already-qualified teams, but I am also doing overviews for each qualifying pool as rosters are released. This time: the pool in Regensburg, Germany.
Go after the jump. All rosters are from Baseball America.

END_OF_DOCUMENT_TOKEN_TO_BE_REPLACED

It’s a little late for Canada Day, but here are some projections for the Canucks. Well, projections for what they’ll be if they qualify, because they have to: they lost both of their games in 2009, falling to Team USA and then being upset by Italy… on home turf. What’s worse, Canada won’t be able to call upon the major leaguers, as their qualifying pool is this September in Germany, when Joey Votto, Brett Lawrie and friends will be busy. Now, admittedly, a team of minor leaguers and semi-pros from Canada should be able to handle the best that Czech Republic, Germany and the UK will send, but you’d have thought that Canada could handle Italy (even with a few Italian-American ringers), and look how that went.

Still, let’s just assume that Canada qualifies and make the tournament proper, allowing them to get a hold of the rapidly-growing amount of Canadians in MLB. Then they become dangerous, a dark horse that could, conceivably, win the tournament if they got a few breaks here and there. They have lots of guys who can play in lots of places, and

So, as usual, a rundown of the rules, and then the roster after the jump: