In 30 Teams, 30 Posts, I write a post (of varying amounts of seriousness) about every MLB team in some way in the lead-up to the beginning of the 2016 season. Earlier installments can be found here. Today, I speak of Dandy, the short-lived Yankees mascot.

Every team in MLB has a mascot, with three exceptions: the Angels (although they do have the Rally Monkey), the Dodgers… and the Yankees.

But, believe it or not, the Yankees did indeed have a mascot at one point! His name was Dandy, and he looked like this: 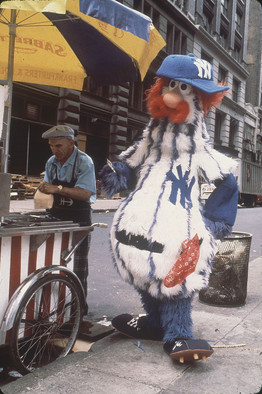 Created by Bonnie Erickson (who also designed Miss Piggy) and her husband and creative partner Wayde Harrison (together, they created the Phillie Phanatic, Youppi!, and other famed mascots), Dandy came to be in an attempt for the Yankees to replicate Phanatic Phever. With the Erickson/Harrison pedigree, a friendly and huggable shape, and a epic mustache, Dandy seemed destined for success. Even George Steinbrenner seemed interested in him, haggling with Erickson and Harrison to make sure that the color of Dandy’s pinstripes were the right shade.

And Dandy may have gotten away with it too, if not for that meddling Chicken. Two weeks before Dandy was to debut in 1979, Lou Piniella took umbrage at the San Diego Chicken (on loan to the Mariners) putting a hex on Ron Guidry and threw his mitt at him. After this incident, Steinbrenner declared that mascots had no place in baseball.

Still, a deal was a deal, so Dandy went into action- in a greatly reduced capacity. His opening debut, which would have involved a pre-set routine and theme music, was scrapped, never to be seen. The Yankees did everything in their power to make him as unimportant as possible, even saying in their team guide that he was just there to amuse the kiddies and stay as far away from the action as possible. True to their word, he was confined up in the cheap-seats.

To make matters worse, for a time Dandy was banned from the stadium outright because his mustache called to mind Thurman Munson, who died in a tragic plane crash.

So, perhaps it isn’t surprising that the few years that Dandy existed were ones of obscurity. As early as the 1990s, people who worked for the Yankees claimed that there never even was a mascot. At one point, during a rare public appearance, Dandy was attacked by a group of drunk bankers, causing the guy inside of the costume- somebody named Rick Ford- to hold it for ransom.

Amazingly, though, it wasn’t the Yankees who cancelled Dandy. It was Erickson and Harrison, who hated how marginalized their creation was. They took him and went home when his lease was up, despite the fact the Yankees were interested in renewing it. To this day, they still own the rights and design, so if you are an eclectic millionaire looking to have a obscure mascot at your next birthday party… give them a call.

“Not so Fine and Dandy: The History of The Yankees Mascot” by Josh Eisenberg

“The Short, Sad History Of The Yankees 1980s Mascot, Dandy” by Jen Carlson

(The following is about 90% sarcastic. I hope.)

Given that Chase Utley is going to be eligible, here are a few possibilities of what could happen tonight:

Utley doesn’t play. There are boos and stuff during the pre-game and during the game, but no retaliation is done and it more-or-less is uneventful. However, this just means that the bad stuff will happen later. This is the least-bad scenario.

The Mets are America’s darlings right now and most everyone is feeling for them after what happened. However, imagine if tonight Chase Utley doesn’t play, but the Mets go for their vengeance anyway. Perhaps they do a hard slide against a Dodgers middle-infielder, or decide that Adrian Gonzalez would make a nice substitute for Utley at the plate? Then, all the sudden the Mets look like just as big of bullies as the Dodgers, and while the home crowd will eat it up, almost everyone else will be disgusted.

Scenario Three: The Carousel of Boos

Utley plays, but doesn’t do much at the plate or in the field and the Mets don’t retaliate either. He just hears very loud boos all night long. One of the least-bad scenarios.

This scenario is simple: Harvey or another Mets pitcher pegs Chase Utley with a pitch. Maybe they get thrown out, maybe they don’t. Whatever happens, though, Utley just walks to first, knowing that he deserved that. The score more-or-less settled, the game goes on.

Like the above scenario, except Utley, possessed by some strange demon, charges the mound. Low-level fisticuffs are had, people’s mothers are insulted, there is pushing and shoving, and both Utley and the pitcher who hit him is sent to the showers, perhaps with other players as well. It’s a bad look for MLB and the two teams.

Utley plays. In his first AB, he homers or does some other big play that scores runs for the the Dodgers. The fans are incensed, especially because they believe he should have been suspended. Things are thrown on the field, the game is delayed for a time, security is heightened.

And then things get worse. The Dodgers start to go nuts at the plate, running up the score. And then, during his second AB, Utley gets beaned. All hell breaks loose. The benches clear, the bullpens empty, actual punches are thrown. In the chaos, fans who have been drinking for most of the day (it’s Columbus Day and some will have been off, after all) begin to rush the field. NYPD and stadium security is hapless as anarchy descends upon CitiField. Bartolo Colon throws a trident. One player is caught on camera knocking out a drunk with one punch. Mr. Met’s head inexplicably ends up on eBay.

When the dust finally settles, the game is called and the Mets forfeit Game 3, leading to outright soccer-style rioting outside of the stadium that eventually leads to the Mets also forfeiting Game 4 and thus the series. The entire incident goes down in history as the ugliest fan moment in baseball history since at least Disco Demolition Night.

So, yeah, this could ugly.

Last month’s look at unofficial and unlicensed baseball shirts was a big hit, even being picked up by SI.com’s Extra Mustard. So, since I’m never the type to quit while I’m ahead, I’ll do another. So, with the postseason starting tomorrow, here are the best unofficial and/or unlicensed (or, in extreme circumstances, just plain cool) t-shirts for those teams. Click the links to be brought to the stores that are selling them.

(Note: Some of these are not technically unofficial, but are rather licensed by individual players or the Hall of Fame. You’ll see, for example, a HOF Reggie Jackson shirt that conspicuously doesn’t have any Yankees logos on it.)

END_OF_DOCUMENT_TOKEN_TO_BE_REPLACED

It’s all my fault. Sometime late in the 6th inning, I wrote this:

God, I was so stupid. Because I then went and watched the first episode of Daredevil, and when that was over, we turned to ABC WHAM-13 (which the Yankee game was simulcasting on here in Rochester) expecting to see the end of the news. And not only was the game on and in extra innings, they were in a blackout delay because of some problems with the lights.

And when they did start again, the game went on, and on… and on…

Also, this game may still be going on during his induction speech.

David Ortiz hit a home run, but the Yankees then tied it up. The game went to the 17th inning.

It will be graduating high school when the #Yankees–#RedSox game is over. https://t.co/yda7aqT3zH — Dan J. Glickman (@DanJGlickman) April 11, 2015

On the bright side of things, proving the existence of purgatory tonight is the greatest theological advancement in centuries.

Some began to lose it:

We have, all of us, achieved a measure of dreams and nightmares

Some tried to look towards survival:

Xander Bogaerts has stolen second base and is attempting to barter it for provisions. — Adam Jacobi (@Adam_Jacobi) April 11, 2015

But, eventually, it finally ended:

it’s over we did it good work everybody

What do we do, indeed. Oh, and kudos to Dutch actress Clarice Van Houten (AKA Melisandre from Game of Thrones), who proved her Honkbal cred by staying for the entire game:

And now…maybe, we can go to sleep.

NAAAAAAHHHH, more games start today at one! We can sleep during the off-season!