It was going to take a lot to have baseball get much attention last night. I mean, the NBA finals were on and had another close game, Marvel announced that The Punisher would be in the next season of Daredevil (that’s going to be SO AWESOME), and, of course, there is the day-to-day news- politics, the weather, crime, etc.

And it would have seemed even less likely that Chris Heston of the Giants would be the one to draw attention. I mean, Bryce Harper was playing in Yankee Stadium! Tanaka vs. Scherzer! The Mets-Giants game wasn’t even the biggest baseball game in New York City!

But, nope, Chris Heston, a rookie, went and threw a no-hitter, and had two hits and 2 RBIs as well! He struck out 11 and, for the first time in at least a hundred years, hit three batters with pitches.

So, obviously, he’s the MVP of Yesterday. Standings after the jump.

END_OF_DOCUMENT_TOKEN_TO_BE_REPLACED

It’s late so I can’t write too much, but, anyway, I was at the ballpark tonight. However, this story starts on July 24, when I was sitting on my couch watching the Rochester Red Wings play in Durham. Trevor May, who I discussed a few days ago, was pitching, and he was on that day, having given up no hits in the first three frames…. until the skies opened up and washed it away after three innings.

Cut to today (August 11), because Rochester wouldn’t be back to Durham, they were playing it here. Durham would still technically be the home team, and it would still be a nine-inning game, but it would be played in Rochester. Of course, Trevor May is now with Minnesota, so taking the mound instead was Logan Darnell… 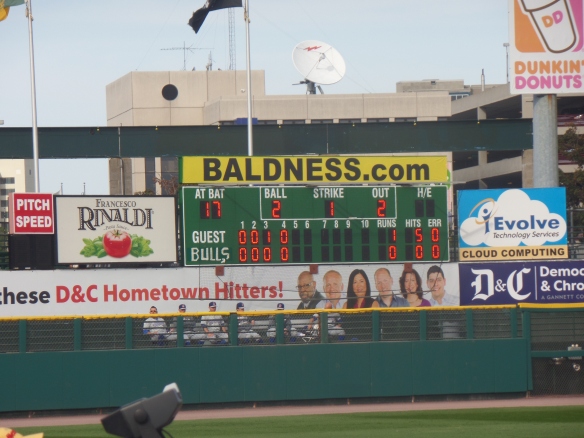 It was still early, but here’s how the scoreboard looked, complete with makeshift “Bulls” sign.

And a funny thing happened: Darnell was unhittable. Literally. He struck out five and got the final hitter, Justin Christian, to ground into a double play to seal the 3-0 no-hitter.

And then, of course, everybody went crazy:

This was the third no-hitter I’ve ever seen in person (or, as somebody else pointed out to me, the second and two-thirds no-hitter, since I technically only saw just six of the nine innings). It also, however, is the weirdest. Consider how this technically was a road win for Rochester, despite being at home, where they have excelled all year. Consider how the person who started the no-hitter (May) is now in Minnesota, and the person who threw the final six innings (Darnell) had been called up AND sent down by Minnesota since the game began. Chris Colabello, who had an RBI single during the game, was also in Minnesota. The losing pitcher for Durham, Alex Colome, had been the winning pitcher in Durham’s win yesterday against Buffalo. Jayson Nix, who was the starting 2B for Durham when the game started, isn’t even in the Tampa Bay organization anymore. 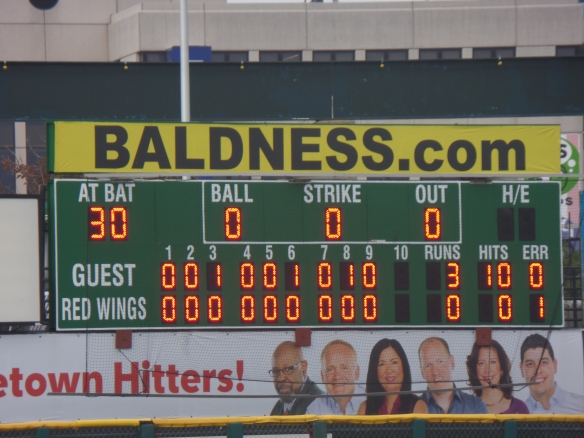 (They’d removed the “Bulls” from the bottom, but hadn’t wiped the board yet.)

And, then, of course, there is the final strangeness that there was a whole other game to play. That was a interesting game, too, with the Wings squeaking out a 5-4 victory despite the rehabbing Wil Myers hitting a Grand Slam for Durham (leading to a hilarious Twitter exchange between Durham and their parent club), but… well… it was coming after a no-hitter that spanned weeks and states… so… well… better luck next time, game two of a double-header.

Hideo Nomo became the first Japanese player to be on the HOF ballot this year, and while he won’t make it, he definitely deserves to be on the ballot. So, to celebrate that, here’s video of the time Nomo threw a no-hitter in pre-humidor Coors Field.

But this is ridiculous.

Henderson Alvarez of the Marlins had a no-hitter, and when he got it, he watched it from the on-deck circle as the Marlins walked off on a wild pitch.

You can’t make this up.

Tim Lincecum was the losing pitcher of Homer Bailey‘s no-hitter, but, for the first time since 1906, he was the one to author the next no-no, going the distance with 148 pitches and with 14 strikeouts. Is there any doubt he’s the MVP of Yesterday?

END_OF_DOCUMENT_TOKEN_TO_BE_REPLACED

Just kidding, it’s Homer Bailey, who threw his second no-hitter and the first since… he did it last year on September 28. I mean, if you throw a no-hitter, you basically HAVE to be the MVP of Yesterday.

Standings, as always, after the jump:

END_OF_DOCUMENT_TOKEN_TO_BE_REPLACED

There is site out there that came to my attention shortly after Johan Santana completed his no-hitter tonight: Nonohitters.com. It was written by a Mets fan who kept count as the Mets continued to not have a no-hitter.
The person who runs it can now, presumably, sell it to a Padres fan, as they now have that record.

This was a no-hitter that was good for baseball fans in general (well, except for Cardinals fans). The Mets now finally have their no-hitter, all the more amazing considering the great pitchers they had in the past. Tom Seaver and Nolan Ryan didn’t throw one in a Mets uniform. Neither did Dwight Gooden or David Cone. Tom Glavine didn’t do it either. ‘

But Johan Santana did. This was something everyone (again, except for Cardinals fans) could get behind. Johan is one of the great pitchers of his generation, but could have been even greater if not for his injury problems as a Met. He became, over the years, something of a shadow of his old Minnesota self. Now, however, it appears that he has returned, which is good for baseball.

In many ways, this was the most entertaining no-hitter of the year, with the possible exception of Phil Humber (who Johan Santana was traded for once) and his perfect game. Here’s why:

So, it was game to remember for every baseball fan in America who isn’t a Cardinals fan. Well, except for Mets radio announcer Josh Lewin:

Oh my. MT @sportswatch: Mets radio man @joshlewinstuff told me Wednesday he would be missing Friday’s game for his daughter’s graduation.

So, anyway, congratulations to Johan Santana and all of those New York Mets fans who finally have a no-hitter to celebrate. Padres: you are on the clock.

I wasn’t at a TV last night as Justin Verlander, the best pitcher in baseball, was throwing a no-hitter. I was at a ballgame. I heard about it after he’d finished seven, but by the time I got to the ballpark’s bar and got them to switch it to MLB Network, he was just finishing off the eighth. It was then that a Red Sox fan, wondering why that game wasn’t on anymore, asked why:

“Verlander is throwing a no-no,” I said.

So then it was just waiting. MLB Network kept showing the Red Sox game, but promising they would head back to Detroit once Verlander took the mound again. It felt like an eternity, waiting for them to get back to Detroit. It felt like it was going to be inevitable that he was going to throw it, so it was something of both a shock and a disappointment when Josh Harrison got a soft hit to center with one out. No-hitters always seem to end with the littlest hits, as that is all it takes.

For most pitchers, to lose a no-hitter in the ninth would be a great missed opportunity, one they likely would never have the chance to have again. With Verlander, however, that isn’t the case, as we are now to the point where every time he steps to the mound, there is a real chance he could throw a no-hitter. It doesn’t matter where he is or who he is facing. Barring injury, I have no doubt that he will throw another no-hitter. Heck, he could have several more. He is the first threat to Nolan Ryan‘s record since… ever.

Only Ryan, Sandy Koufax, Cy Young, Bob Feller and Larry Corcoran (a ace of the 19th century who died at the age of 32 from Bright’s Disease) have three or more no-hitters. It is probably only a matter of time before Verlander joins them, and, perhaps, one day surpasses them.