AVENGERS ASSEMBLE! Avengers: Endgame is breaking all of the box office records, so now is as good of a time as any to bring you a Bizarre Baseball Culture look at a truly bizarre Avengers tale: 2008’s Marvel Adventures The Avengers Volume 1 #26, in which baseball helps our heroes save a planet from Galactus, the Devourer of Worlds.

Well, sort of. It’s more of a non-sequitur thrown in to justify this awesome cover:

And… I’m totally fine with that! It is available to read for Marvel Unlimited subscribers here. Head below the jump for more of this piece:

As I said back in a Marvel Adventures Spider-Man issue of Bizarre Baseball Culture, the “Marvel Adventures” (also known as “Marvel Age”) imprint of Marvel Comics was an all-ages line of comics put out by Marvel to make up for how mature and continuity-heavy the main books had become. The complicated backstories were simplified, the characters involved generally would be those that kids would already be familiar with, there wouldn’t be as much violence, and the bad language and sexual innuendo would be non-existent.

They also would, as this story shows, be way more wacky.

For the Avengers, this meant that the team would be radically different, with a mix of characters that kids would know in the pre-Iron Man movie age mixed with some that just had neat gimmicks that the kids would understand. So, for example, in this issue the roster consists of kids-know-them characters like Spider-Man, the Hulk and Storm from the X-Men, alongside Avengers stalwart Captain America and the neat-powers duo of Ant-Man and Giant-Girl. Giant-Girl is literally just The Wasp, only she grows instead of shrinks. I presume they created her for this so that they could have another girl on the team and characters like Scarlet Witch, Black Widow, Miss Marvel (now Captain Marvel) and She-Hulk just didn’t strike the creators’ fancy.

Who was creating this, anyway? Well…

Well, you see, here’s the description on the Marvel Unlimited site. It likely stems from a teaser included in solicitations that previewed the issue when it first came out:

Yes, if this is to be believed, this issue more-or-less stems from Leonard Kirk drawing a whimsical image of the Avengers playing baseball against Galactus and leaving the rest of the creative team to figure it out.

Comics have been written for far worse reasons.

Anyway, our story begins in India, where aliens have invaded. After a joke about telemarketers by Spider-Man that A) would probably have gone above kids’ heads, and B) is in fairly poor taste, Ant-Man and Doctor Banner are able to figure out how to translate the aliens’ speech.

It turns out the aliens are from the planet Baston-Kar, and they have a major superiority complex and never pass up a chance to insult our heroes. However, they have an issue that has caused them to come to Earth for help. 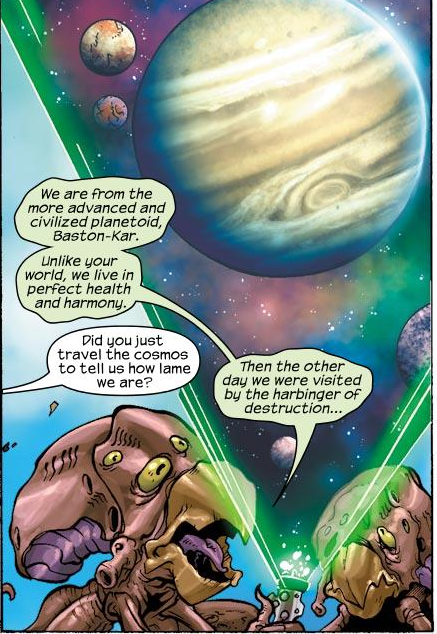 What is the harbinger of destruction? The Silver Surfer, the herald of Galactus. Galactus is a big guy in a purple costume who eats planets. It’s nothing personal, it just is his purpose in the cosmos. Still, eating planets with living beings on them is generally frowned upon. so he’s not exactly popular.

The Baston-Karians say the only reason they came to our stupid rock is that Earth is the only planet to successfully turn back Galactus. Which is true, as the Fantastic Four were able to (with the help of the cosmic being known as the Watcher) defeat him in one of the most classic superhero stories of all time, ultimately convincing him to leave Earth alone by threatening to use a weapon- the Ultimate Nullifier- that would have destroyed the whole universe.

So off the Avengers go to Baston-Kar. After some passive-aggressive insults from the local populace and Ant-Man getting all happy that Baston-Kar has ants, Galactus arrives, and it’s go-time. 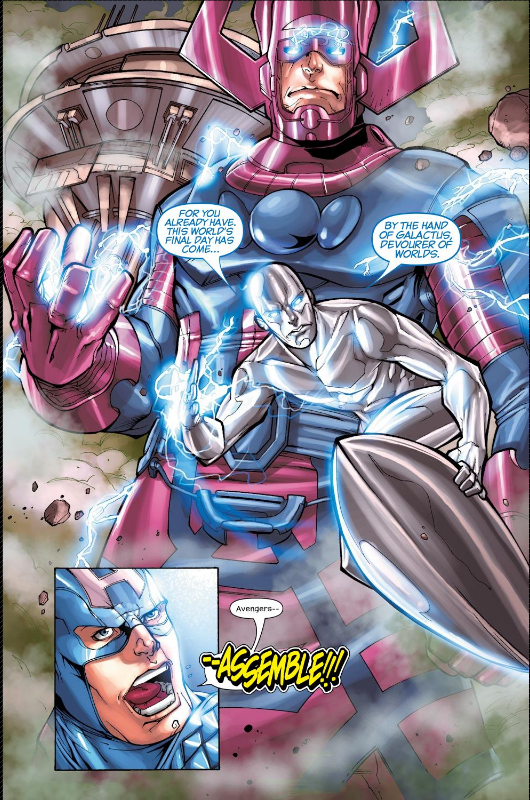 They fight. The Avengers lose in the fight, of course, but Ant-Man is able to get a hold of the Ultimate Nullifier, leading to a stand-off…. until Spider-Man presses the button.

Thankfully, in the Marvel Adventures universe it actually doesn’t destroy the universe, simply nullifies power advantages, so Galactus tells them that since they are now equal in power, they’ll have to determine this through other contests:

First, the Avengers and Galactus play chess. They lose (perhaps because the Hulk didn’t know the rules), so Captain America proposes another contest.

Well, it’s the reason why this comic is being covered here:

You may be wondering how the Avengers could play baseball against Galactus, given that they only have five people this issue and Galactus has, like, two. Well, to be fair, they actually point this out.

I have some issues with this. Okay, so Captain America is the catcher, Ant-Man is the pitcher, Spider-Man is the shortstop (despite appearing to be in second baseman position), and Giant-Girl is the lone outfielder.

Putting aside the fact that Spider-Man is shortstop and yet clearly playing second base- perhaps explained through the use of some strange shift, where are the other Avengers? Where’s Storm playing? Or the Hulk? Presumably one of them has to be first baseman, right? Where’s the other one playing? We may never know.

Still, the fact is that having Giant-Girl play outfield works out pretty well: 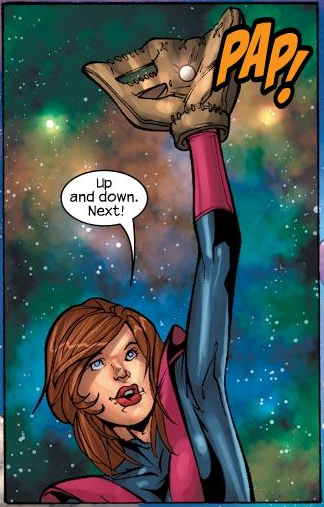 Alas, the baseball portion here is far-too-short, as when Galactus steps to the plate Ant-Man ruins everything.

Don’t see what is going on here? Let’s zoom in:

Yes, Hank Pym screws it all up by throwing a pitch that runs on one of Zeno’s paradoxes, specifically the one that suggests that motion is ultimately an illusion. So basically he throws a pitch that stops in thin air, leaving the game in eternal limbo, somewhat similar to what happened in “The Day Baseball Died“.

So, in other words, we only get two pages of baseball with Galactus because Hank Pym screws everything up. Goddamn it, Hank.

Oh well, at least we get this image of them playing poker out of it: 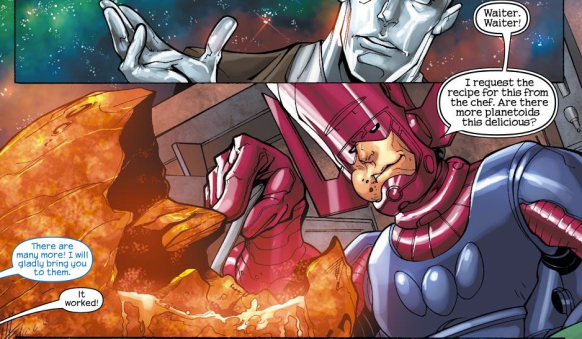 With that, the Avengers head back to Baston-Kar to get insulted one last time, and then leave to head back to Earth, another day saved.

Now if only Hank Pym hadn’t ruined that baseball game….

40. “Challenge of the Headless Baseball Team!”

47. Cleveland Indians Strikeforce vs. The Scatman

54. Power Rangers “A Star Is Born”, and the Japanese episode it is based on

59. Avengers (briefly) play baseball with Galactus (you are here)